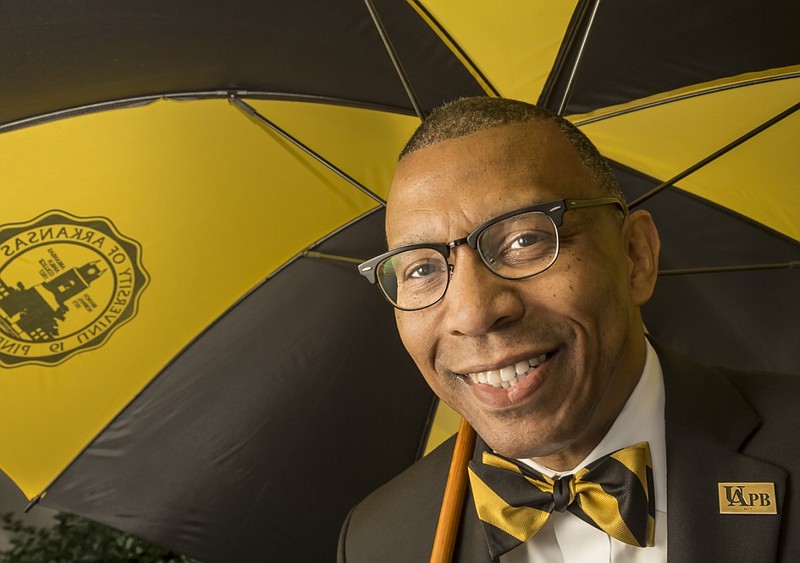 Laurence B. Alexander, chancellor of the University of Arkansas at Pine Bluff, is shown in this August 2016 file photo.

University of Arkansas at Pine Bluff Chancellor Laurence B. Alexander was one of four finalists who interviewed on campus last fall for the role of executive vice president and university provost at the University of Louisville.

The position went to Lori Stewart Gonzalez, a University of Tennessee Health Sciences Center vice chancellor who's expected to start at Louisville no later than April 1.

Alexander participated in an open forum Nov. 5 at the Kentucky university's Belknap campus. He, Gonzalez and two other finalists responded to questions about their interest in the position and university and their definition of short-term and long-term success in their desired role, but were interviewed on different days.

In a six-page cover letter to his application found on Louisville's faculty web page, Alexander wrote to search committee co-chairmen: "After carefully examining the leadership profile, I am enthusiastically submitting my application to you and the members of the Search Committee for your consideration for this senior leadership opportunity at a premier Research 1 community-engaged university."

Alexander also expressed appreciation to the committee "for its diligence and perseverance during the coronavirus pandemic," and added Louisville's Research 1 status was "very appealing."

Alexander, who could not be reached for comment, has served as chancellor at UAPB since 2013 after a 22-year career at the University of Florida, where he rose from assistant journalism professor to dean of the graduate school and later as an inaugural Distinguished Teaching Scholar. He began his education career at his alma mater, the University of New Orleans, and also worked at Temple University in Philadelphia.

He wrote to the Louisville search committee that his "early career experiences" such as expanding and growing partnerships with major Philadelphia newspapers while at Temple University, along with his time at Florida, prepared him for his current position and for the EVP/university provost job at Louisville. He also touted the establishment of three divisions at UAPB: Enrollment Management and Student Success; Institutional Advancement; and Research, Innovation and Economic Development.

The executive vice president and university provost at Louisville is the chief academic officer for the institution. In the position, Gonzalez will report directly to the president and be second overall in authority, "responsible for establishing and implementing educational and teaching priorities," according to a position profile posted on the university's website.

Louisville had a student population of 22,684 for the Fall 2019 semester. The university offers 12 schools and colleges totaling more than 200 degree programs. The university athletically competes in the Atlantic Coast Conference.