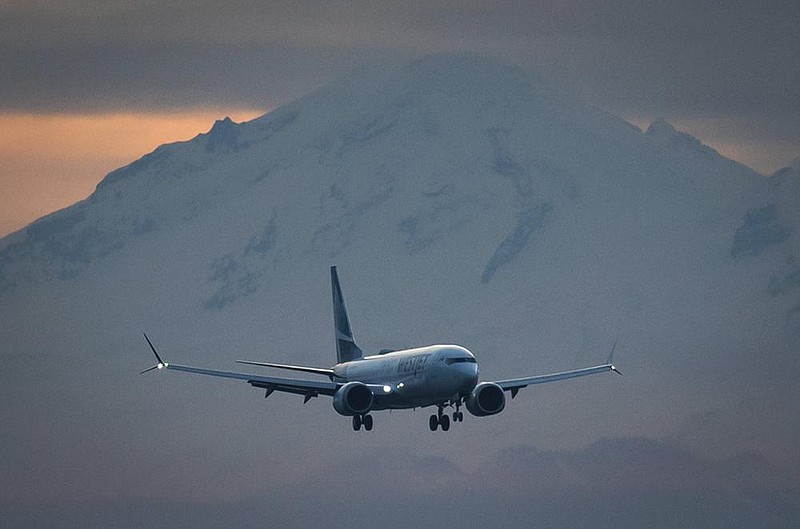 Mount Baker in Washington state is a backdrop as a WestJet Airlines Boeing 737 Max aircraft arrives earlier this week at Vancouver International Airport in Richmond, British Columbia. Ethiopian Airlines has sued Boeing over the 2019 crash of a 737 Max. (AP/The Canadian Press/Darryl Dyck)

American attorneys for Ethiopian Airlines, which lost 157 passengers and crew in the second crash of a Boeing 737 Max in early 2019, have advised the carrier not to accept a settlement Boeing has offered but instead to sue the manufacturer for punitive damages in the U.S.

In an urgently worded letter sent Sunday, the Chicago attorneys warned Tewolde GebreMariam, Ethiopian Airlines' chief executive, that the offer falls "grossly short" of what the airline could win before a U.S. jury -- particularly since Boeing recently accepted responsibility for criminal fraud during the plane's certification by regulators.

The settlement Boeing has offered is "a mere fraction" of the actual damage, the lawyers told Tewolde, and accepting it "will inevitably leave substantial money on the table and would be a tremendous political and financial mistake for Ethiopian Airlines."

Yet like many airlines, Ethiopian is now desperate for cash.

Before the 2019 crash, state-owned Ethiopian was the largest and most successful airline in Africa. It lost business after the tragedy and the subsequent grounding of the Max fleet. Then last year its revenue plummeted further when the coronavirus pandemic paralyzed air travel.

The letter conveys the attorneys' concern that direct settlement negotiations between Boeing and the airline's management are close to done and that a "financially disastrous" deal may be imminent.

A person familiar with developments in the private negotiations provided details from the letter to The Seattle Times.

It offers a rare look inside what are normally secret negotiations. And with the Max back in the air and the second anniversary of the second crash approaching, it highlights a Boeing push to conclude customer compensation discussions and put the Max crisis behind it.

The letter from law firm DiCello Levitt Gutzler, which Ethiopian Airlines hired to provide advice on its claims against Boeing, is signed by co-founding partner Adam Levitt.

Boeing declined to comment on discussions with its customer. Ethiopian Airlines did not respond to an emailed request for comment. Levitt did not return a call seeking an interview.

Levitt's letter argues that Boeing's deferred prosecution agreement with the Department of Justice earlier this month provides the airline new legal leverage because of "Boeing's admission of its criminal conduct."

The Justice Department settlement staves off a criminal fraud charge against Boeing with a relatively light $244 million penalty.

It also explicitly exonerates senior management while pinning the fraud on two Boeing technical pilots who misrepresented to airlines the details of new flight control software on the Max -- the maneuvering characteristics augmentation system -- that was a key contributing factor in both crashes.

However, Boeing admitted in the deferred prosecution agreement that the accusations of fraud involving the two pilots were "true and accurate" and acknowledged that the company is responsible for criminal acts by its employees.

Furthermore, the Justice Department deal states that Boeing agrees to make no claims "in litigation or otherwise" that contradict its acceptance of responsibility.

Levitt wrote that Boeing's "admissions would prove a case of fraud and also would support a punitive damages claim."

And he said Boeing's deception is exacerbated by how company executives initially sought to cast blame on Ethiopian's pilots for the March 2019 crash.

"These facts will have a powerful effect in a court of law and Boeing knows it," Levitt wrote.

He urged Tewolde to "reject Boeing's current, desperate settlement entreaties" and "immediately file and prosecute its claims against Boeing, in the United States."

The airline's claim against Boeing is separate from the claims of the families of the crash victims. Other U.S. law firms are handling about 140 such lawsuits, of which only a handful have been settled.

Ethiopian Airlines is negotiating for economic compensation: for the loss of its plane; for the subsequent grounding of its Max fleet and the halt of new deliveries that reduced its profits in the year that followed; for the payouts the airline itself made to the families of passengers immediately after the crash; and for the significant reputational and brand damage.

Levitt's letter states that independent expert assessments put the airline's financial hit at "not less than $1.8 billion in cash."

According to disclosures in financial filings, Boeing has set aside about $9 billion to cover present and future compensation to all of its Max customers, about 58 airlines and airplane lessors. So the $1.8 billion figure cited by the lawyers advising Ethiopian would be a significant claim for a single customer.