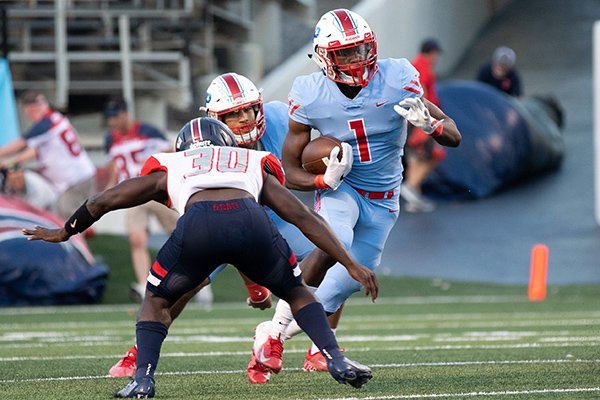 Arkansas conducted virtual visits Saturday with several in-state prospects who have offers from the Razorbacks.

ESPN rates him a 4-star prospects, the No. 34 offensive tackle and the No. 262 overall recruit in the nation for the 2022 class.

The Razorbacks’ focus on academics impressed him.

“It went good me and my mom really liked it,” Harris said. “The academic part of it and how they help you get a degree so after college or after the NFL and you can get a good job.”

“It went well,” Courtney said. “I can’t wait to be up there. It was a great experience for sure.”

Little Rock Parkview running back James Jointer (6-0, 205, 4.46 seconds in the 40-yard dash) is being pursued by Arkansas, Florida State, Kansas State, Colorado, Arizona State and others.

“It was good,” Jointer said. “ I mean I’ve already seen the campus, so it was more so of a day of just talking to the coaches but I think it was very thoughtful of them to have it in-state guys only.”

“It was really good getting to see the facilities and my coaches,” he said of the two-hour visit. “I’m really excited to get up there on a visit and get the chance to shake the coaches' hands.”

“It was good, but the Jones Center stood out the most. It's just well made and it could really make you feel at home,” Chamblee said.

ESPN rates Chamblee a 4-star recruit, the No. 30 offensive tackle and the No. 220 overall prospect in the nation.