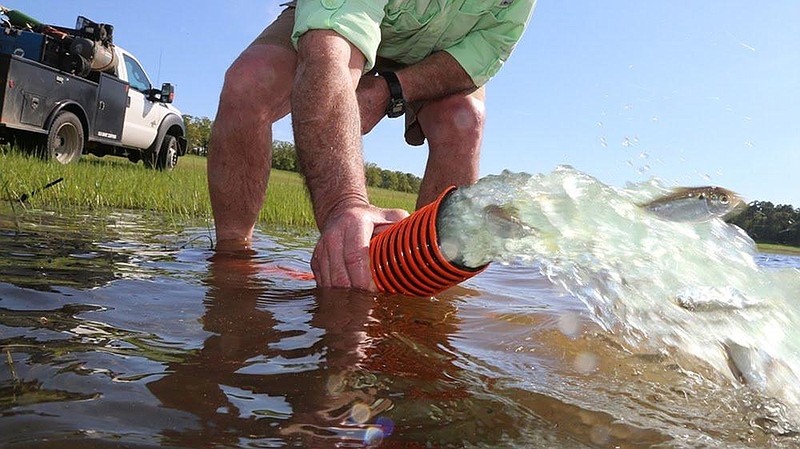 Threadfin shad are among baitfish being stocked in state waters by the Arkansas Game and Fish Commission. (Special to The Commercial)

When there are more mouths to feed, the focus turns to providing those mouths with food. That's the evolving stance at the Arkansas Game and Fish Commission when it pertains to fish production and stockings.

Yes, the AGFC still raises many hundred thousands of mature fish for stocking lakes, streams and ponds, but in 2020 the total fish produced at AGFC hatcheries leaned toward baitfish, according to Tommy Laird, assistant chief in the Fisheries Division over culture.

"We were heavy on baitfish," Laird said. "We produced a large percentage of baitfish for the state in shad, golden shiners, bluegill, redear, fathead minnows. Over half of what we produced went into the state waters as baitfish, about 60 percent, to provide forage for predator fish."

AGFC hatcheries produced 17.6 million fish. But rather than producing more hungry, grown-up fish to stock in major lakes, biologists have concluded that the lakes are well-populated with adults that need forage to grow. One of the prime examples of this recent strategy, Laird pointed out, is Greers Ferry Lake and its stockings of threadfin shad.

"We're really pushing habitat improvement on lakes and more forage where there is a poor forage base," Laird said. "At Greers Ferry Lake, we've been pushing forage there for a lot of years, and it's made a big difference. Hatcheries have moved from stocking a large number of predator fish to producing the forage for those predator fish."

The second most produced and stocked fish in 2020 was black bass. The AGFC produced and stocked a record 2.5 million Florida-strain black bass last year. Along with Northern strain bass and smallmouth stockings, the overall black bass stockings reached 3 million. Florida-strain largemouth bass were stocked mostly in warmer south Arkansas lakes where biologists are trying to maintain or establish a healthy Florida bass population.

Tiny baitfish make up a huge number of fish produced, but they don't account for the most weight. The AGFC realizes there are human mouths to feed as well, which is why such species as catfish and trout are grown to table-ready size for stocking in specific locations, for fishing derbies and to boost the population where a species such as rainbow trout doesn't reproduce.

Channel catfish production numbered 472,000, small compared with forage stockings of such species as shad and minnows, but in total poundage topped 250,000 pounds, or 40 percent of the total tonnage produced at the hatcheries in 2020, Laird said.

The coronavirus pandemic, which surfaced in Arkansas in mid-March, changed the way the AGFC stocked catfish. In a typical year, Laird noted, catfish would be stocked throughout the state on a weekly basis through the spring and into summer.

But changes in hatchery work structure and the cancellation of all of the usual spring and summer fishing derbies in Arkansas led the AGFC to stock the table-ready size catfish in two major stockings: The first came in early June in the run-up to the state's Free Fishing Weekend, while another occurred in September just before National Hunting and Fishing Day. The stockings were carried out over several days and required the hatcheries staff to focus totally on the catfish during that time, Laird said.

It also required hatcheries to keep many of the ready-to-stock catfish for longer than usual. A typical channel catfish requires 16-19 months development from the egg stage to "table-ready" stocking size.

The AGFC plans on that amount of time in the annual budget. But covid-19 required some catfish to be kept longer, and fed longer with a maintenance diet, which added to the cost of production, Laird noted.

"We stocked 50,000 before the free fishing weekend," Laird said. "It was a logistical nightmare. It changed the structure for when other fish had to be harvested and moved. ... We had to shut everything down for a two-week period and just get catfish out all over the state. That put a lot of stress on the staff. That was the biggest thing.

"My guys did wonders at all the hatcheries. They pulled it together like they always do. There never seems to be a hurdle they can't handle. So, kudos to my staff, they overcame it. They worked extra and got it done. My hat is off to them. They deserve all the credit."

While baitfish and catfish made up the majority of the stockings in the state, the hatcheries also produced large numbers of other species, such as crappie (black, white and black-nosed) – about 990,000 and 254,000 walleye fingerlings.