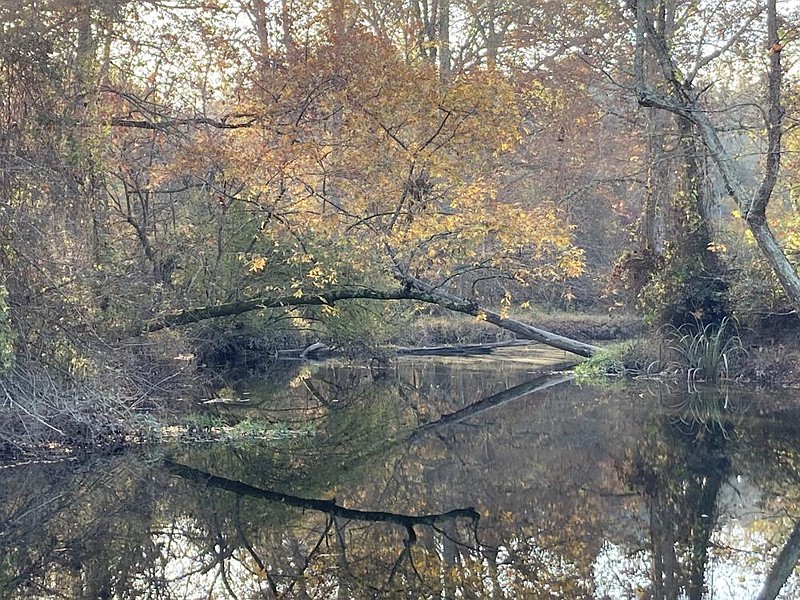 Two different mostly fallen trees reach out toward each other as the still water of Bayou Bartholomew reflects them and an abundance of fall colors in this November 2020 file photo.

The Arkansas Game and Fish Commission unanimously approved the use of marine fuel tax funds to build a boat ramp to Bayou Bartholomew at its intersection with Arkansas 277 in Drew County.

The measure was passed at the regularly scheduled meeting Thursday. Total funds approved for the boat ramp project are not to exceed $180,000, according to a news release.

The project was recommended by staff to take advantage of current work being performed on the bridge spanning the bayou at that location, according to Kevin Mullen, chief of operations for the state Game and Fish Commission.

"The Arkansas Department of Transportation is planning to renovate the bridge, so the timing of this project works out as a good addition to the renovation," Mullen said.

Marine fuel taxes are collected on gasoline and diesel fuel used in boats throughout Arkansas. The money is held by the highway department and is distributed through a partnership between it and the state Game and Fish Commission .

Since its inception in 1969, Arkansas' marine fuel tax has funded nearly $59 million in improvements to boating access in the state.

Considered the longest bayou in the world, Bayou Bartholomew begins near Pine Bluff and flows 359 river miles to the Ouachita River in Sterlington, La.

In other business, the commission:

• Heard from Deke Whitbeck, Arkansas Game and Fish Foundation president, who presented the foundation's intent to begin the Scott Landers Memorial Lifetime License Award thanks to a generous donation by the Landers family of central Arkansas in memory of their son who died last year.

• Recognized six employees of the commission with a combined 115 years of dedication to the natural resources of Arkansas.

• Heard a presentation from Ted Zawislak, the commission's private lands program coordinator, with an update on the program and this year's recipients of the commission's 2020 Private Landowner Achievement Awards.

A video of the meeting is available at www.youtube.com/user/ArkansasGameandFish.