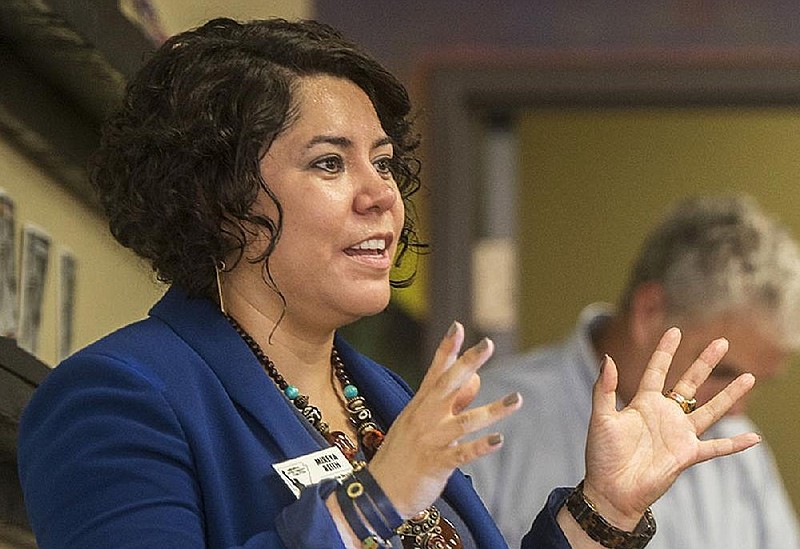 Mireya Reith, excutive director for the Arkansas United Community Coalition, speaks at the Immigrant Resource Center in Springdale in this Aug. 18, 2015, file photo.

Immigrant advocacy groups and higher-education officials praised President Joe Biden's move to protect beneficiaries of the Deferred Action for Childhood Arrivals program, but warned much work on the issue remains.

Among a series of orders, memorandums and proclamations by Biden on his first day in office was an executive order to preserve the program that has shielded from deportation hundreds of thousands of people who came to the U.S. as children since it was introduced in 2012, according to The Associated Press.

Deferred Action for Childhood Arrivals guidance deferred the removal of certain people who were brought illegally to the United States as children, have obeyed the law and stayed in school or enlisted in the military. The program allows eligible people who pass a background check to request temporary relief from removal and to apply for temporary work permits.

Wednesday was a historic and positive day for the Arkansas immigrant community, said Mireya Reith, founding executive director of Arkansas United, a Springdale nonprofit dedicated to empowering immigrants and their communities through advocacy and closing service gaps, according to its website.

Arkansas United on Thursday held an hourlong online panel discussion to talk through the immigration changes the Biden administration rolled out during its first day in office.

Biden's move forces action to be taken by the Department of Homeland Security to find longer-term solutions for DACA participants, Reith said. So-called Dreamers need to know only an act of Congress can give a permanent pathway to residency and citizenship, she said.

Sen. Tom Cotton, R-Ark., said Biden's plan would "hurt American workers, lead to more illegal border crossings, and be detrimental to the health and safety of Americans," in a tweet Wednesday.

The Homeland Security Department also announced a 100-day moratorium on deportations "for certain noncitizens" starting Friday, after Biden revoked one of Trump's earliest executive orders making anyone in the country illegally a priority for deportations, according to The Associated Press. Biden also extended temporary legal status to Liberians who fled civil war and the Ebola outbreak to June 2022, according to the AP.

"At least for a 100 days we should see a major decline in deportations in ways that allow our community to connect with attorneys and other legal advocates to be able to make sure that they are on the best pathway possible to staying here, and that is the most hope that we have seen in many, many years for our immigrant community," Reith said.

Arkansas United was part of a group that met with the White House in preparation for Wednesday's announcements.

"We can say that the Biden administration was listening to us about the most urgent needs that needed to take place," Reith said.

Higher-education officials in Northwest Arkansas also praised Biden's move. Many people participating in the Deferred Action for Childhood Arrivals program are students seeking postsecondary education or who wish to be.

"We've long held the position that the University of Arkansas believes strongly that the State of Arkansas, and, indeed, the nation and world, is strengthened by an educated population," according to a statement provided by Laura Jacobs, associate vice chancellor and chief of staff for Chancellor Joe Steinmetz.

"Here, that includes students who were brought to this country as children -- through no fault of their own -- and who have grown up in our state, attended our public schools and befriended our children, and have made contributions to our campuses, our economy and to our communities," the statement said.

The statement noted the Arkansas General Assembly during the 2019 legislative session granted in-state tuition for certain students who have graduated from Arkansas high schools, including the Dreamers.

A statement from Northwest Arkansas Community College about the protection program read: "Northwest Arkansas Community College is an open admission institution. Our mission is to educate any student who comes through our doors. We believe that education is the key to unlocking opportunity and building a strong economy and skilled workforce. As your community college, NWACC looks forward to continuing to serve all students."

Biden's most ambitious proposal is an immigration bill that would give legal status and a path to citizenship to anyone in the United States before Jan. 1 -- an estimated 11 million people -- and reduce the time that family members must wait outside the United States for green cards, according to the AP.

Arkansas United will launch its New American Dreams platform, a #StrongerTogether campaign, to push the Legislature to address health inequities revealed by the state’s pandemic response, Arkansas’ English-Only Law, limits on ballot interpreters and the continued fight for access to teaching licenses for Deferred Action for Childhood Arrivals recipients. 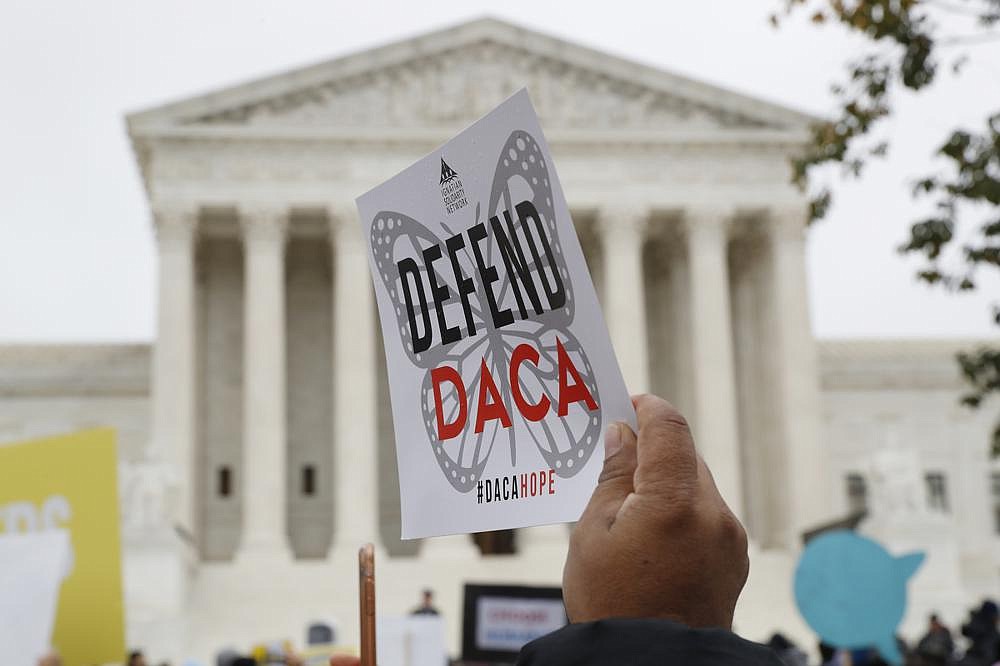 FILE - In this Nov. 12, 2019, file photo people rally outside the Supreme Court over President Trump's decision to end the Deferred Action for Childhood Arrivals program (DACA), at the Supreme Court in Washington. A Tuesday, Dec. 22, 2020 federal court hearing in Houston over a U.S. program shielding immigrants brought to the country illegally as children highlights the peril the program still faces even under an incoming Democratic president who has pledged to protect it. (AP Photo/Jacquelyn Martin, File)
ADVERTISEMENT