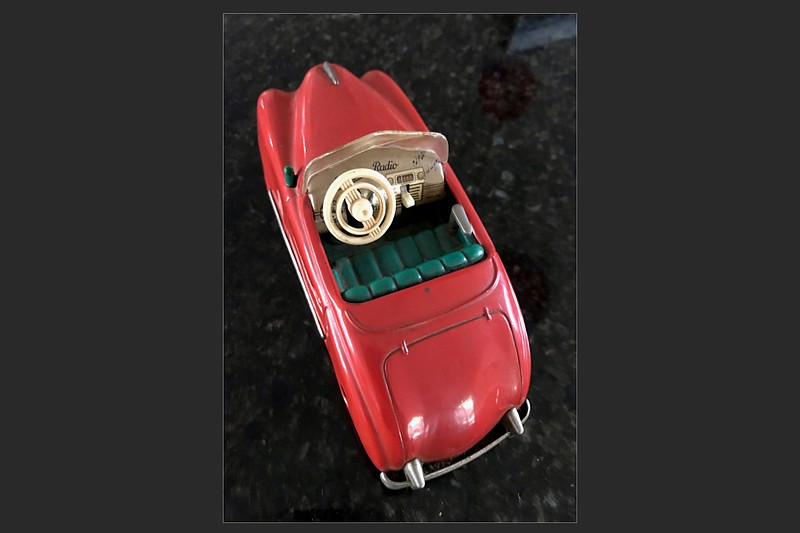 Having the box and original accessories to this Shuco car is vital to the value. (Handout/TNS)

DEAR HELAINE AND JOE: I have enclosed photographs of two toy cars I would like to know more about. I received these Schuco Radio cars about 1950. I have two, and one is in better condition than the other. Are they rare or collectible?

DEAR D.H.: Our collective heads are spinning, and our minds are filled with questions that cannot be answered from the photographs or from the letter.

That said, we want to begin with a brief history of Schuco, which was founded in 1912 by Heinrich Mueller and Heinrich Schreyer in Nuremberg, Germany — the historic center of the German toy industry. Originally the company was named Spielzeugfirma Schreyer and Co., which is a bit of a tongue-twister for non-German-speaking consumers.

The name was changed in 1921 to Schuco, a name possibly derived from the first three letters of the name "Schreyer," the "U" for the German word "und" ("and" in English), and the first two letters from "company." The firm was known for making toy cars and trucks, but they also made almost every conceivable toy from a dancing mouse or trotting dog wearing a cape to a dancing human couple or Swiss soldier playing a drum.

It is believed that because Schuco ended in an "o," the company had a tendency to end their line names in "o." There was "Studio," "Piccolo," "Magico" and "Electro" to name just a few. But there was also "Radio," which is the line of the car in today's question.

At first we were expecting this cute little car to have a radio in it, but that lasted only a second or two until we discovered the vehicle contained a Thorens music box that played "Les Lavandieres du Portugal." There was a winding mechanism for the music box and the wheels that had a distinctive Schuco key.

But for this price to be valid, the owner must have the box in pristine condition, the instruction sheet that came in the box and the key, and the car itself must look bright and essentially unused. The only information we have is from the photographs D.H. submitted and they show no box, no instruction sheet and no key.

Does the music box work? Does the clockwork mechanism that turns the wheels still function? These are vital questions to which we do not know the answers. We must assume — and we hate to assume — that all D.H. has is the two cars as they are shown in the photographs, and this represents a rather large and significant loss of value.

Lots of these Schuco Radio 4012 music box cars exist, but many have their original box, instruction sheet, key and are in generally excellent condition. This puts D.H.'s car as shown at a low level of collector interest and should probably be valued at less than $30 each.