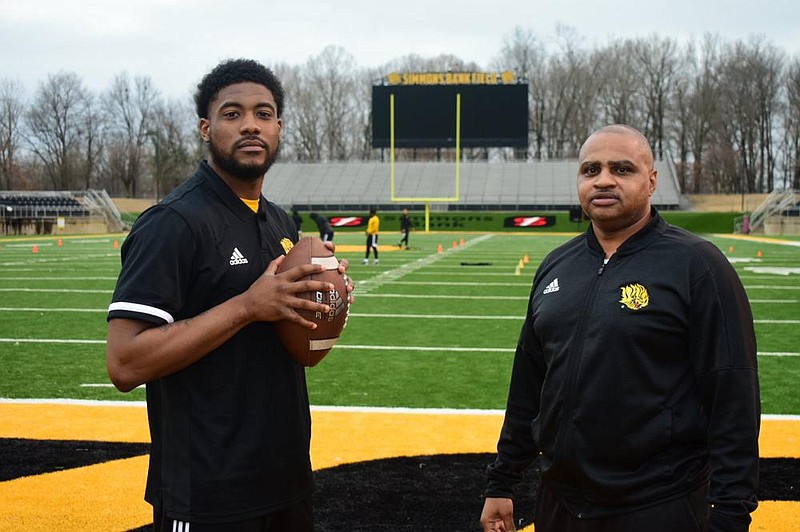 The 2020 football season came and went for major-college football programs, but for most lower-level teams, the fun is just beginning.

The Southwestern Athletic Conference was one of the first leagues in the Football Championship Subdivision to announce it would play during the spring rather than the fall as college football teams scrambled to determine if and how they should go forward with a season amid the coronavirus pandemic. That means the University of Arkansas at Pine Bluff and nine other teams are now looking ahead to a six-game schedule that kicks off Feb. 27 and will conclude with the May 1 conference championship game between the SWAC's division champions.

Junior quarterback Skyler Perry remembers how he found out football would be back.

"I was coming back and I was like, 'OK, we're just going to handle school and see how things shape around,'" said Perry, who was named the starter during the offseason and has 11 starts in 19 career games. "When they told us we could start working out, we had our equipment outside. We still did our lifts and our runs, and we found out we were having practice. The guys were fired up and excited."

First-year head coach Doc Gamble said getting players in game shape after more than a year off was "no doubt" a concern, but also one the players addressed themselves.

"We know we've got a lot of self-starters," Gamble said. "The guys look different now as opposed to how they looked in the fall. That lets me know they did do some things on their own at home."

UAPB also had the benefit of holding 15 practices during the fall and going through winter training with a full strength and conditioning staff.

"Hopefully we're on the same playing field as other guys," Gamble said. "Individually they've given themselves an edge over our next opponent physically. The biggest measure is when you go against another opponent."

The Lions begin preseason camp next Friday with their first game scheduled for Feb. 27 at home against Texas Southern. They will then visit Southern University on March 6, take a bye date March 13 for the SWAC basketball tournaments, play at Grambling State on March 20, host Alabama State on March 27, visit Mississippi Valley State on April 3, go on a second bye date and host Prairie View A&M on April 17. Kickoff times are yet to be announced.

UAPB went 6-5 overall (3-4 in the SWAC) in 2019 for its first winning season since winning the 2012 SWAC title. But Cedric Thomas stepped down as head coach shortly afterward to take an assistant coaching position at Southern Miss, and Gamble -- previously the quarterbacks and assistant head coach -- was elevated to the top role last April.

A year will have passed since Gamble took over in the interim before he coaches in a game.

"I heard I had a good chance at it, and I was told to keep doing what I'm doing and let the process play itself out," Gamble said. "It worked out for myself and some of the guys who are still around. The kids know a familiar face."

Familiarity will likely benefit Perry, the New Orleans native who threw for 784 yards and eight touchdowns in 2019.

"Nothing's really changed because he's going to coach the same," Perry said of Gamble. "He's going to criticize. You take it all in stride, and you get better each and every day."