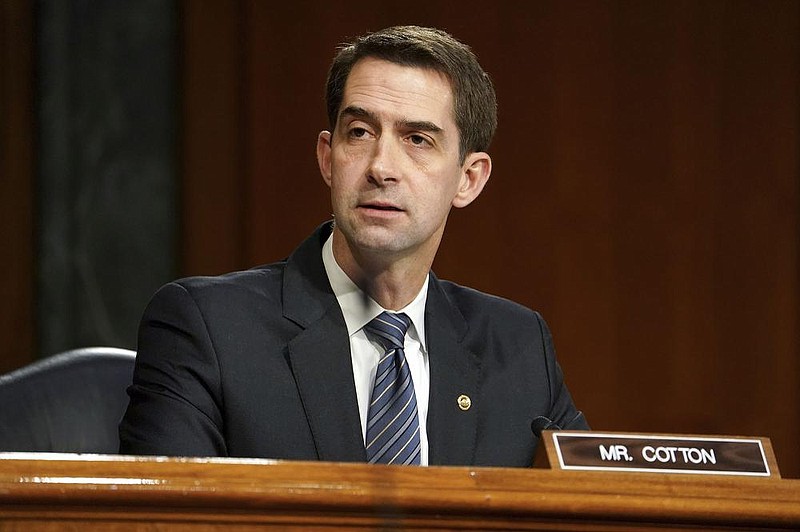 WASHINGTON -- As a political newcomer in 2012, U.S. Sen. Tom Cotton, R-Ark., exaggerated his military record while campaigning for his first seat in Congress, the news website Salon.com alleged in an article dated Saturday.

While Cotton completed a two-month-long Ranger School course and was entitled to wear a Ranger tab on his uniform, he was only Ranger-qualified and never served in any capacity as part of an elite Ranger regiment, Salon.com stated.

[Video not showing up above? Click here to watch » https://www.youtube.com/watch?v=pRCeQ5Tl3xQ]

Salon.com reproduced a May 2012 ad from the Madison County Record, calling Cotton 'A Battle-Tested Leader' who "volunteered to be an Army Ranger."

It mentioned a February 2012 Hot Springs Sentinel-Record article, which quoted Cotton as saying: "My experience as a U.S. Army Ranger in Iraq and Afghanistan and my experience in business will put me in very good condition, not just to be a vote in Congress for the conservative side, but a leader, someone who can influence my peers and help move a block of 15, 20 or 25 votes and help take the country back in a conservative direction and do the right thing for Arkansas and for America."

It also referred to a September 2011 Talk Politics interview, in which Cotton said: "I did join the Army and become an infantry officer and an Army Ranger."

A 2012 ad, approved by the candidate, begins with a screen shot identifying him as "Tom Cotton" on one line and Army Ranger" on the next.

In an October 2014 campaign commercial, he stated: "I made tough decisions as an Army Ranger in Iraq. I'll make them again as your senator."

None of his opponents challenged Cotton's Army Ranger credentials.

Saturday, Cotton's spokeswoman, Caroline Tabler, said he would not be available for comment Saturday. His previous claims about his military service are accurate, she said.

"To be clear, as he's stated many times, Senator Cotton graduated from Ranger School, earned the Ranger Tab, and served a combat tour with the 101st Airborne, not the 75th Ranger Regiment," she said in a written statement.

The 101st Airborne is a light infantry division renowned for its air assault operations.

In a statement to the author of the Salon.com article, Tabler wrote: "Senator Cotton graduated from Ranger school and is more of a Ranger than a Salon reporter like you will ever be."

Salon.com has targeted Cotton for years, running articles with headlines such as "10 frightening facts about Tom Cotton" and "Chair of the imbecile caucus: Sen. Tom Cotton proudly stands at the vanguard of shameless Republican obstructionism."

Tweeting a picture of an Army Ranger in uniform, Crow wrote: "Hey @SenTomCotton, unless you wore one of these berets you shouldn't be calling yourself a Ranger. Truth matters."

After the Salon.com article appeared, similar write-ups appeared on the websites of Rolling Stone, Newsweek, the New York Post and The Independent, a British online-only paper.

The Salon.com article didn't challenge other portions of Cotton's biography: that he decided to serve in the Army after the Sept. 11, 2001, terrorist attacks, but delayed doing so until he had paid off student loans; that he led an infantry platoon with the 101st Airborne in Baghdad, and also served in Afghanistan and as a member of the Old Guard at Arlington National Cemetery.

Merritt said in a telephone interview that the attacks on Cotton's record are "so absurd."

"An attack on him is an attack on every veteran who has served honorably," he added.

Tabler said Cotton didn't know Merritt, but offered to respond to the claims made by Salon.com.

News accounts for more than a decade, including some predating Cotton's return to civilian life, have referred to him as an Army Ranger.

Articles and sometimes opinion pieces in National Review, the Weekly Standard, the Arkansas Democrat-Gazette, The Washington Post and The New York Times all referred to him as a former Army Ranger, as did reports from CNN, Fox News and MSNBC.

Cotton's Senate website biography makes no mention of him being an Army Ranger.

It says he "served nearly five years on active duty in the United States Army as an Infantry Officer" and also "served in Iraq with the 101st Airborne and in Afghanistan with a Provincial Reconstruction Team."

The U.S. Army Ranger Course, on the other hand, is "the Army's premier leadership school, and falls under Training and Doctrine Command located at Fort Eustis, Virginia."

"[O]pen to all members of the military, regardless of whether they have served in the 75th Ranger Regiment," it is at Fort Benning, Ga.