GOP resistant, liberals want to go it alone by Compiled by Democrat-Gazette Staff From Wire Reports | January 24, 2021 at 4:31 a.m. 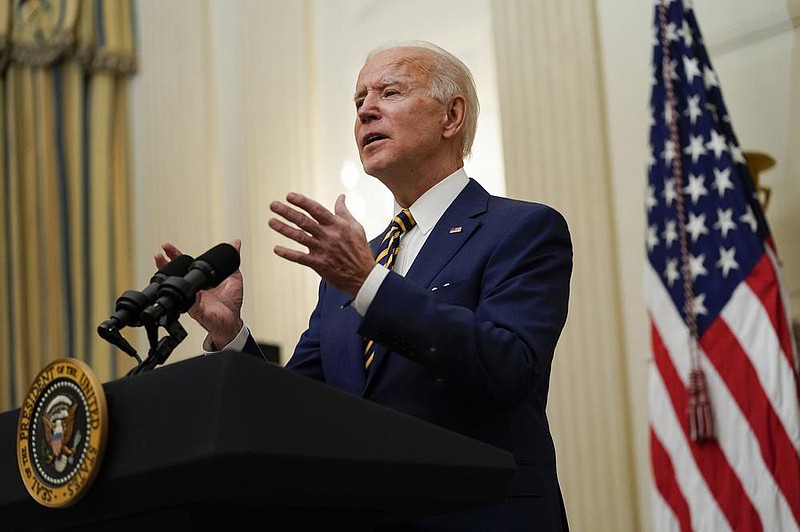 President Joe Biden “has been clear that he will not sign any new free-trade agreements” before shoring up the U.S. economy, his treasury secretary nominee, Janet Yellen, has said. (AP/Evan Vucci)

WASHINGTON -- President Joe Biden's pitch for bipartisan unity to defeat the coronavirus and resurrect the economy is meeting resistance on Capitol Hill, where Republicans and Democrats can't agree on ground rules for running the Senate -- let alone pass a $1.9 trillion stimulus bill.

While Biden's attention is largely focused on getting the coronavirus pandemic under control and pressing for bipartisan support in Congress to pass his relief plan, British Prime Minister Boris Johnson pushed Biden on Saturday to forge a new U.S.-U.K. trade deal.

Biden's relief package is getting push-back from senior Senate Republicans, some of whom say there has been little, if any, outreach from the Biden team to get their support.

Liberals are demanding the president abandon attempts to make a bipartisan deal altogether and instead push the legislation through without GOP votes. And outside groups are turning up the pressure for Biden and the Democrats who control Congress to enact economic relief quickly, even if it means cutting Republicans out of the deal.

"It's important that Democrats deliver for America. If the best path to that is to do it in a way that can bring Republicans along, I'm all in favor of that," Sen. Elizabeth Warren, D-Mass., said. "But if Republicans want to cut back to the point that we're not delivering what needs to be done, then we need to be prepared to fight them. Our job is to deliver for the American people."

Publicly, top aides insist Biden is serious about wanting a bipartisan deal on the relief bill. They say this should be achievable given the magnitude of the economic and health care crisis besetting the nation a year after the pandemic began, with more than 416,000 dead and the economy newly shedding jobs. Some Democrats have expressed optimism that GOP frustration with how the Trump administration ended could convince some Republicans to be more open to a fresh start with a Democratic president, especially since longtime lawmakers know Biden from his decades in the Senate and as vice president.

But when Biden's relief plan rang in at nearly $2 trillion this month, and included Democratic priorities like an increase in the federal minimum wage to $15 an hour, some Republicans saw it as a sign that Biden wasn't really serious about getting their support. Even those Republicans who have suggested they're open to making a deal have made clear that the package would need to undergo significant changes.

"I suspect the whole package is a nonstarter, but it's got plenty of starters in it. And a lot of them are things that we proposed in terms of more assistance to the states," said Sen. Roy Blunt, R-Mo., referring to money for vaccine distribution and the Centers for Disease Control and Prevention. "There's some things in there that aren't going to happen. There's some things that can happen. And that's how this process should work."

Outreach to GOP lawmakers before and after the plan's release appears to have occurred only at the staff level so far and has been confined to a limited number of senators, including members of a bipartisan group who helped break a stalemate over coronavirus relief legislation late last year.

Biden economic adviser Brian Deese is scheduled today to directly brief the senators in that group on a Zoom call. But as of Friday, Senate GOP leadership had not been formally briefed, and a number of GOP lawmakers who are part of the bipartisan talks said they had heard nothing from the White House.

"I have not personally [heard from the White House], and I'm disappointed in that, not about me but about, you know, it's one thing to talk about outreach, another thing to do it," said Sen. Rob Portman, R-Ohio, a senior lawmaker who is a member of the bipartisan group that will confer today with Deese.

"It's much more successful around here if you try to get the bipartisanship at the start so that it's a foundation of trust," Portman added.

Instead, Biden unveiled his $1.9 trillion plan without any bipartisan buy-in, leaving Republicans to question the need for such a big new package coming on the heels of the $900 billion Congress approved in December for economic relief, vaccines and more. Including that legislation, Congress has already devoted about $4 trillion to fighting the pandemic and the economic devastation it wrought.

"I look forward to hearing their views. My own thought is that we should only be spending money where there is need that needs to be met, and so I'd like to see the figures and calculations behind their proposal," Sen. Mitt Romney, R-Utah, another member of the bipartisan group, said. "I think there's a recognition on both sides of the aisle that where there's need, we in Congress have a responsibility to help meet that. But we don't want to be borrowing money that's not absolutely necessary."

Questioned about how a nearly $2 trillion package filled with proposals that are anathema to Republicans could be described as a bipartisan overture, White House press secretary Jen Psaki insisted it was.

She said Biden would be getting personally engaged in finding support for his plan. "He's very eager to be closely involved, roll up the sleeves ... and make the calls himself," she said.

Psaki said that in trying to sell the package to Republicans, the White House approach would be to ask them which priorities they would cut. The wide-ranging proposal includes a new round of $1,400 stimulus checks to individuals, an extension and increase in emergency unemployment benefits that would otherwise expire in mid-March, and an enhanced child tax credit, as well as hundreds of billions of dollars to help schools reopen and increase testing and vaccine production and delivery.

Some Republicans are open to a number of these provisions but view others -- such as the minimum wage increase -- as unrelated to the coronavirus and designed to appease an antsy liberal base more than garner bipartisan backing.

"Biden's opening order was such an overreach that instead of opening negotiations, it just scared Republicans away," said Brian Riedl, policy expert at the libertarian-leaning Manhattan Institute and a former GOP Senate aide. Riedl said Republicans may be open to a deal somewhere between $500 billion and $1 trillion but that Biden's opening bid made that less likely. "The opening offer can be so extreme it can poison the well and push the other side away."

While insisting that Biden's preference is for a bipartisan deal, Psaki has repeatedly declined to rule out moving forward under special Senate rules that allow legislation to pass with a simple majority vote instead of the 60 normally required. That was how President Barack Obama enacted the Patient Protection and Affordable Care Act and how Republicans passed tax legislation early in President Donald Trump's term. The procedure could allow Biden to pass his coronavirus relief package with only Democratic votes.

But the path forward under this "budget reconciliation" process could be tricky. The Senate is split 50-50 between Democrats and Republicans, giving Democrats control only because Vice President Kamala Harris can cast tiebreaking votes. That means any individual Democratic senator could hold the legislation up with an array of demands.

Also, Senate leaders thus far haven't even been able to agree on a deal on how to operate the Senate with a 50-50 split, and they're also still arguing over the timing and process for Trump's impeachment trial. Both issues are emerging as impediments to Biden getting his Cabinet confirmed and also probably need to get resolved before the Senate could take up a relief bill.

House Speaker Nancy Pelosi, D-Calif., suggested in a conversation with donors Thursday evening that she was open to advancing Biden's proposal via the reconciliation process in coming weeks, according to a person familiar with her remarks. The person spoke on the condition of anonymity to confirm the private comments, which were first reported by Punchbowl News.

House Budget Committee Chairman John Yarmuth, D-Ky., said he wasn't aware of a final decision on how to proceed but that Democrats were wary of spending too much time negotiating with Republicans at a moment of urgency.

"To haggle over every little provision of Biden's plan (with Republicans) might not be able to be done on a timely basis," Yarmuth said.

Rep. Suzan DelBene, D-Wash., chairwoman of the New Democrat Coalition, noted that last year Republicans refused for months to pass any additional relief, after a spate of legislation in the spring, before finally agreeing to another bill in December.

"We can't let that happen again," DelBene said. "People need certainty and visibility going forward, and that's why this package is so important."

Johnson's push for a new trade deal came in a broad-ranging call between the two leaders that touched on the global response to the coronavirus pandemic as well as the Biden administration announcing last week that the U.S. would rejoin the Paris climate accord and the World Health Organization, according to a statement from the prime minister's office.

A new trade agreement between the allies is a higher priority for Johnson than it is for Biden. The U.K. regained control over its national trade policy at the start of the month after the end of a post-Brexit transition period.

Psaki said Friday that the administration had no timeline for forging a new trade deal.

"President Biden has been clear that he will not sign any new free-trade agreements before the U.S. makes major investments in American workers and our infrastructure," Yellen said.

Johnson's office said Saturday that Biden and Johnson discussed "the benefits of a potential free trade deal between our two countries," and Johnson "reiterated his intention to resolve existing trade issues as soon as possible."

The White House in its own statement said that the two leaders spoke about combating climate change, containing covid-19, and ensuring global health security as well as shared foreign-policy priorities in China, Iran and Russia. But the statement notably made no mention of discussion on trade.

Information for this article was contributed by Erica Werner, Seung Min Kim, and Jeff Stein of The Washington Post; and by Aamer Madhani and Jonathan Lamire of The Associated Press. 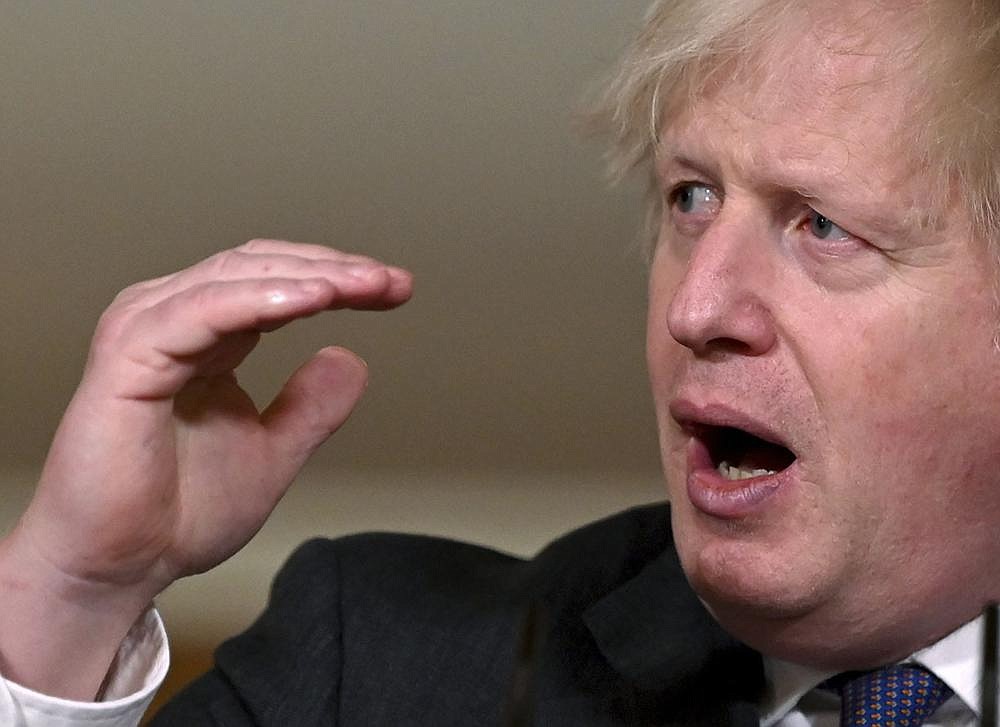