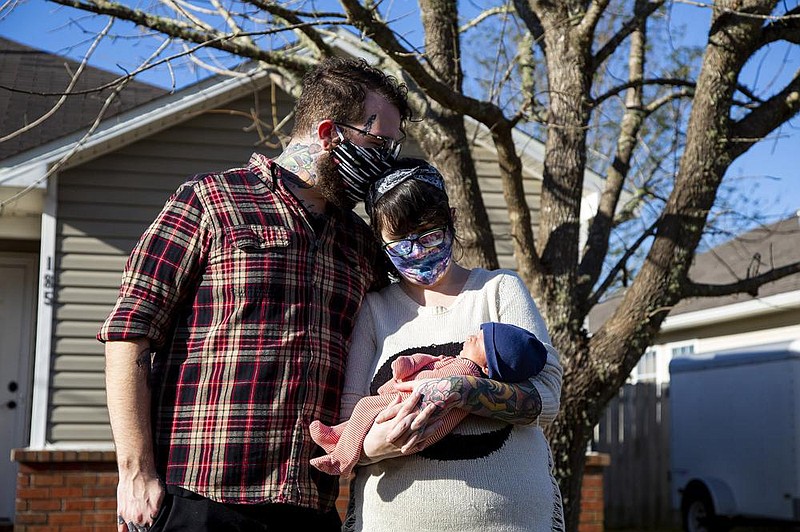 Aaron Walker self-quarantined at home with his wife, Katy Dobson, in the early days of the pandemic. He’s back to work at a tattoo shop now, after a couple of months at home. (For The Washington Post/Meggan Haller)

Katy Dobson and her family have taken to calling her 2-week-old boy, Atlas, a "coronial." Atlas' time in his mother's womb coincided almost perfectly with the nine months that the United States has spent battling the coronavirus pandemic. He was born Dec. 8 in Pensacola, Fla., 38 weeks into his mother's pregnancy and almost 39 weeks after the surreal Wednesday in March when Tom Hanks announced he had tested positive, the NBA suspended its season because of transmission concerns, and the World Health Organization officially declared the coronavirus outbreak a pandemic.

When shutdowns began in the United States back in March, almost immediately there were titters and murmurs of the baby boom that would materialize nine months later. All that free time for cohabitating couples to stay home alone together, surely, would result in overflowing maternity wards come December, the speculation went. At the same time, others wondered whether worries about the devastating effects of the pandemic would cause some couples to put their plans to conceive on hold, leading to a "baby bust" in December and January.

In some cases, like Dobson's, the former is precisely what happened: Her husband, tattoo artist Aaron Walker, 31, went into self-quarantine several days before Florida's stay-at-home orders went into effect March 30. He was suddenly home with Dobson all day every day, "and it happened, like, that week," Dobson, 27, said with a laugh.

It's still unclear what's happening on a national scale. Some hospitals and midwife groups, such as Brigham and Women's in Boston and Brooklyn Homebirth Midwifery in New York, have reported no notable change in numbers of patients expecting in December and January, while Michigan Medicine in Ann Arbor has seen about a 10% decrease. The Birthing Gently doula collective, which has locations in New York City, Boston and Charlotte, N.C., has noticed a 30% increase over last year in clients due in December and January.

The National Center for Health Statistics, part of the Centers for Disease Control and Prevention, doesn't expect to release the nationwide birthrate data for late 2020 (and settle once and for all the whole "boom or bust" question) for another six months. But what's clear now is that the first wave of pandemic babies -- covid babies, coronials, pandemi-kids, whatever you want to call the micro-generation of children conceived, carried and born during the covid-19 crisis -- is making its way into the world, and their parents have experienced pregnancy in a way that few others in modern history have. Their nine-month journeys toward parenthood have been lonelier and more dystopian but at the same time more private and physically comfortable than those of people who embarked on the same adventure as recently as last year.

Dobson had a feeling that trying for a baby in March might mean she'd still be living through a pandemic when her baby arrived. But having experienced a miscarriage in February and multiple others before that, she didn't want to wait.

Dobson's miscarriages, she said, meant her prenatal doctor visits were more frequent than most patients'; she saw her obstetrician every two weeks for her entire pregnancy. New covid-19-related policies meant her temperature was taken at three different checkpoints at each visit. Social distancing requirements and new occupancy limits meant Walker was able to attend almost none of her appointments.

"My husband had to stay in the car for every single one," she said. "So he never really got to be there for me. And it was a very stressful time, because of our history." She wasn't allowed to record any videos in the office, and found FaceTime all but useless in transmitting the imagery of an ultrasound machine. So Dobson absorbed virtually all the progress updates and news about her pregnancy alone.

Dobson found pregnancy overall to be a more solitary experience than she would have liked. Her parents, who live 250 miles away in Birmingham, Ala., agreed to keep their distance out of caution -- which caused heartache all around when Dobson briefly went on bed rest. "My husband was having to do everything," she said.

Even Dobson's brother, who lives in Pensacola, Fla., saw her only twice during her pregnancy. When she was 34 weeks pregnant, "he stood outside in my driveway with his mask on and he goes, 'Man, you're big!'"

Dobson was unable to attend any birthing classes before she delivered Atlas; they weren't offered nearby during the pandemic, she said. She had no baby shower, no shopping trips for nursery supplies or baby clothes, no gender-reveal party. Her mother, she said, sent her friends and relatives a note requesting that in lieu of a shower, they send gifts and cards with a few words of parenting advice through the mail instead. (A Zoom shower, she said, was out of the question: "Our internet's not the greatest down here.")

Dobson took a few photos of her growing belly along the way but didn't share them on social media. Because of their past miscarriages, Dobson and Walker didn't tell anyone they were expecting until her pregnancy reached about 20 weeks -- and with no social engagements for most of the year, some of her acquaintances didn't know she'd even been pregnant until she announced Atlas's birth.

Many women have expressed amusement and bewilderment at the new possibility of a "secret pregnancy" while working from home during the pandemic. Although she doesn't work, Dobson still enjoyed the extra privacy that lockdowns and social distancing measures provided. "It was pretty easy to hide it, you know, not being around other people," she said. "I thought that was very nice." Plus, "I didn't have to go anywhere or entertain people while I was feeling, you know, down and sick," she added. "And whenever I did go places, nobody tried to touch my belly."

There were other upsides, too, to being pregnant in a time when few people were interacting with anyone outside their own homes. Had the world been normal, Dobson would have wanted to take a pre-baby vacation, for example. But the two months she and Walker spent mostly homebound before Walker returned to work in May provided a more substantive "babymoon" than they would have been able to achieve otherwise.

Like every new parent who has given birth in the past nine months, Dobson had to adjust her expectations for the day of delivery -- and manage those of her family. Walker was allowed in the hospital delivery room the day Atlas was born, but no other visitors were permitted. Dobson's mother was disappointed, Dobson said, but she herself was slightly relieved: At the time, multiple relatives were sick with covid-19.

As Dobson and her nationwide cohort of new mothers transition from pandemic pregnancy into pandemic parenthood, some of their unique struggles will fade away and be replaced by the more ordinary challenges of raising kids. But the loneliness, the lack of emotional and practical support that characterized their pregnancies, will probably linger, at least until the vaccines become available to the public: Dobson will limit Atlas' contact with people outside their household for at least another few months, and for as long as the country is still actively dealing with a pandemic, she said, "we don't plan to take him anywhere."

One day, Dobson imagines, she'll explain to Atlas why for the first few months of his life, only two people -- his parents -- ever held him or fed him or rocked him to sleep. She will explain to him that he met his great-grandmother via FaceTime while she was in the hospital recovering from covid-19. She'll tell him the story of Dobson's parents driving for four hours to meet her in the parking lot of her brother's apartment and spending an hour gazing at their new grandson through a car window before heading back home.

She'll explain why his aunts and uncles and grandparents, at her request, sent over close-up pictures of their faces: "To be able to show him so he recognizes people without the mask on," Dobson explained. But as he grows up, Dobson mused, perhaps Atlas won't think anything of the masks that show up here and there in his baby pictures. "I think the mask thing is definitely going to start sticking around during the flu season," she said.

Throughout her pregnancy, Dobson has kept a journal; in the future, she wants to be able remember in vivid, specific detail the conditions that will shape little Atlas' early life. Because while it's a strange, challenging time to be a parent, she said, it's also "a weird time to be a baby." 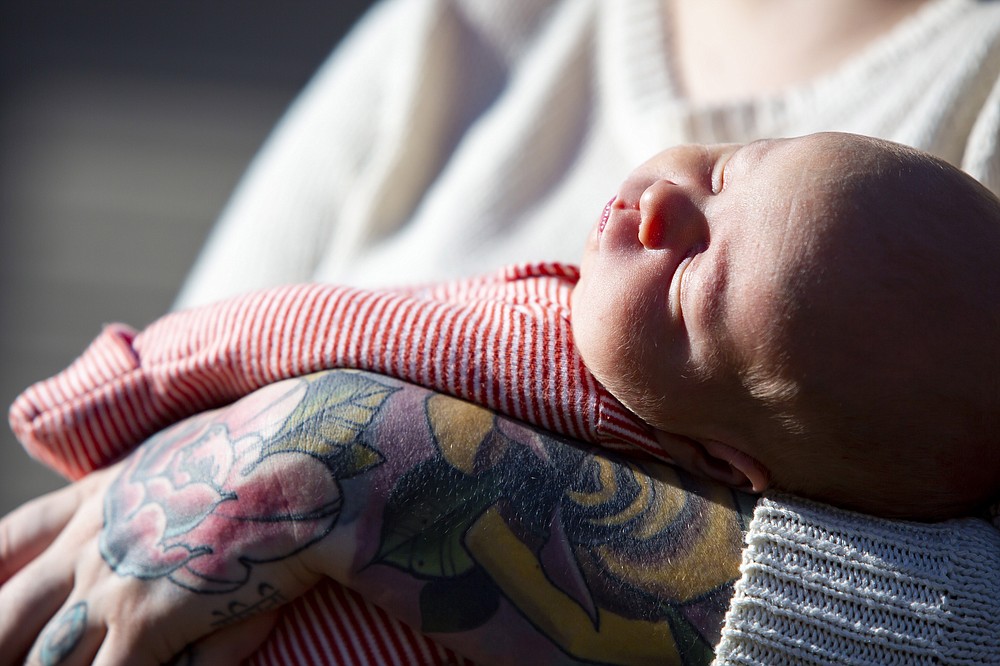 Katy Dobson imagines how she will someday explain to her son the odd early days of his life. MUST CREDIT: Photo by Meggan Haller for The Washington Post.
ADVERTISEMENT