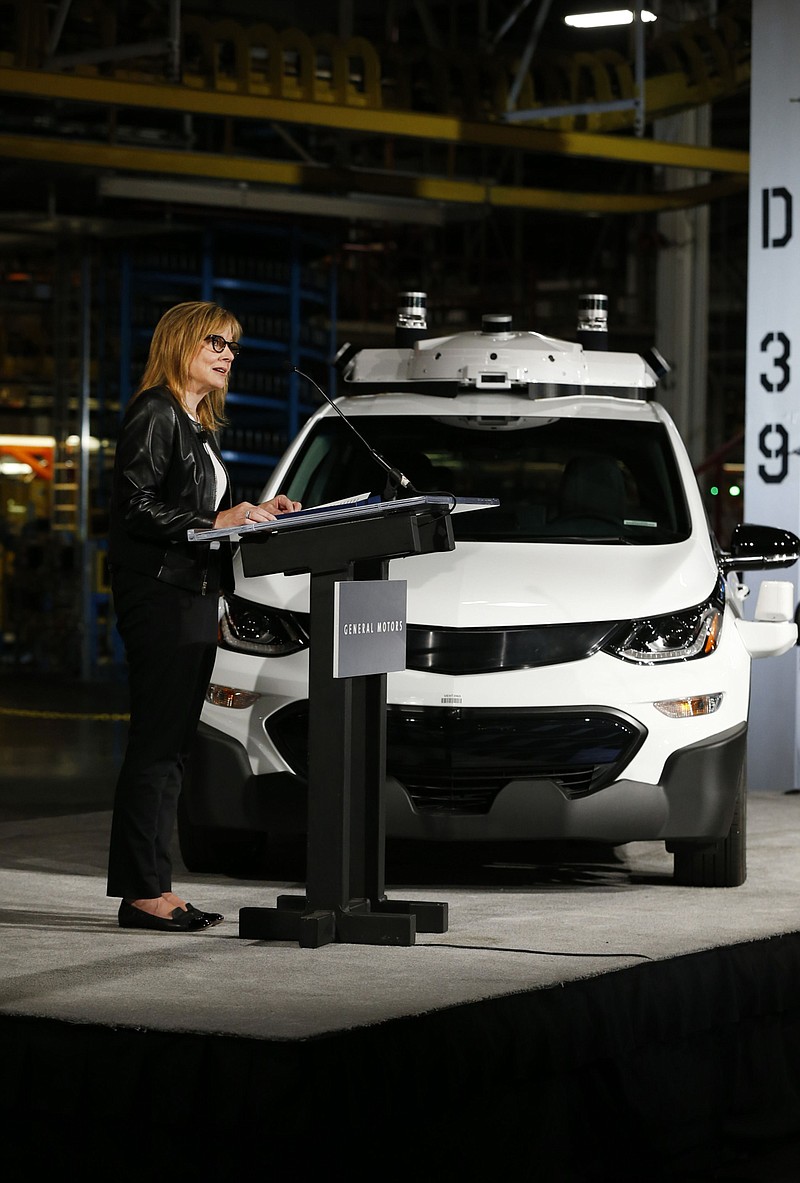 All General Motors Chief Executive Officer Mary Barra needed to hit a stock record was $27 billion and a bit of braggadocio.

The carmaker's shares surged after Microsoft partnered with it to lead a $2 billion fundraising round in a self-driving venture called Cruise. The software giant also will lend its prowess in cloud-computing, an essential tool for managing the GM-owned startup's planned fleet of robotaxis.

Barra and Microsoft CEO Satya Nadella traded tweets to promote the deal, which she linked to a broader move to invest billions more in autonomous and electric vehicle technologies. GM even updated its corporate logo this month to reflect that push.

The two-pronged strategy is behind a three-month rally in the automaker's formerly moribund stock price to all-time highs. GM's shares have soared 60% since October as Barra has doled out details of her plan to get to an all-electric and driverless lineup. In so doing, she has tapped into investor ebullience that long seemed elusive for the Detroit-based company.

"There has finally been a recognition of some of the things that GM has been working on for a while," said David Whiston, an analyst at Morningstar Inc. "They have been teasing the story and keeping suspense going. They're trying to get people excited about the product."

GM's stock remained stuck in low gear for much of 2020 as EV-leader Tesla and a host of startups saw their share prices soar on expectations for a shift in demand favoring battery-powered cars. After touching a post-bankruptcy low of $17 a share in March with its factories temporarily closed to slow the spread of the coronovirus, the carmaker's shares slowly recovered but remained below $40 -- where they had been stuck for much of Barra's seven-year tenure.

Beginning with the unveiling of GM's plans in November to hire 3,000 new workers focused on electric vehicles and spend $27 billion to launch 30 electric models by 2025, Barra has been able to capture the imagination of Wall Street and bolster the carmaker's credibility as a legitimate challenger to Tesla -- even though Elon Musk's company has a $800 billion valuation, 10 times that of GM.

While GM's stock gains were dwarfed by Tesla's 743% rally last year, they topped those of crosstown rival Ford and peer Fiat Chrysler, now part of Europe-based auto giant Stellantis. Analysts remain bullish: 18 rate GM a buy, two view it as a hold and none see it as a sell. Deutsche Bank last week added both GM and Ford to its short-term catalyst call buy list.

"Microsoft's $2 billion investment in GM's self-driving startup Cruise gives the automaker a legitimate software partner while potentially changing the view from laggard to a technology leader," Bloomberg Intelligence senior autos analyst Kevin Tynan wrote in a note. "Valuations afforded to nascent and niche EV companies -- aided by the promise of full self-driving vehicles -- have been denied to legacy automakers. Though chided to catch up, these companies actually have the production scope, scale and distribution expertise and financial wherewithal to lead the tech push."

Apart from auto tech, Barra also is being rewarded by investors for steering the automaker back from the brink last spring when sales collapsed. New-car sales in the U.S. have bounced back to nearly pre-pandemic levels and GM outperformed in the fourth quarter.

Barra has faced a few setbacks as well in recent months, including the surprise departure of rising star Dhivya Suryadevara from her role as chief financial officer, a decision to downgrade a much-ballyhooed plan to join forces with EV startup Nikola Corp. and an about-face on support for Trump administration efforts to prevent tougher emissions regulations.

Although GM has decades-old roots as an innovator in EVs, it hasn't enjoyed the breakthrough success of Tesla, which delivered almost half a million vehicles worldwide in 2020. The company's current EV lineup is limited to the ho-hum Chevrolet Bolt: A small hatchback that sold just over 20,000 units in the U.S. last year. It reinforced the notion of GM as a purveyor of EVs with little sizzle.

The coming wave of battery-driven vehicles will trade instead on GM's most iconic brands -- Cadillac and Hummer -- and its reputation as a powerhouse in full-size pickups. The automaker plans to launch a battery-electric Hummer truck later this year, followed by a Cadillac Lyriq crossover and as-yet-unnamed pickup.

Barra hit her stride in a Jan. 12 presentation to CES, formerly known as the Consumer Electronics Show, in which she revealed plans for a commercial truck business called Bright Drop, which will sell plug-in freight trucks and offer a software system to manage a fleet business. GM's design chief, Mike Simcoe, also talked about how each of GM's four major vehicle brands would have more EVs, including several Cadillacs, three Buicks for the vital Chinese market and a pickup and lower-priced vehicles for Chevrolet.

"Investors are buying the EV story more so now than six months ago after seeing some of the vehicles," said Brian Johnson, a Barclays analyst who put a buy rating on the stock after CES. "And if you look at Europe, where Tesla has lost market share, it's not winner-takes-all in the EV market."

Self-driving technology is the other major initiative Barra is promoting in her words and deeds. Cruise hasn't done much for GM's stock since the company missed its target to launch a commercial service in late 2019. But the company has kept working quietly to develop its technology as it races to get to market before rivals such as with Google parent company Alphabet Inc.'s Waymo unit and Amazon.com-owned Zoox Inc.

The recent bout of activity at Cruise -- including its hiring of a former Delta Air Lines executive as chief operating officer and a new partnership with Walmart to test driverless delivery vehicles -- indicates progress is being made toward monetizing self-driving vehicles.

The challenge for Barra will be to keep that momentum as GM debuts its latest EVs and measures car-buyer demand for them.

"That's going to be the next leg of the story," Johnson said. "A car that is affordable and stylish."