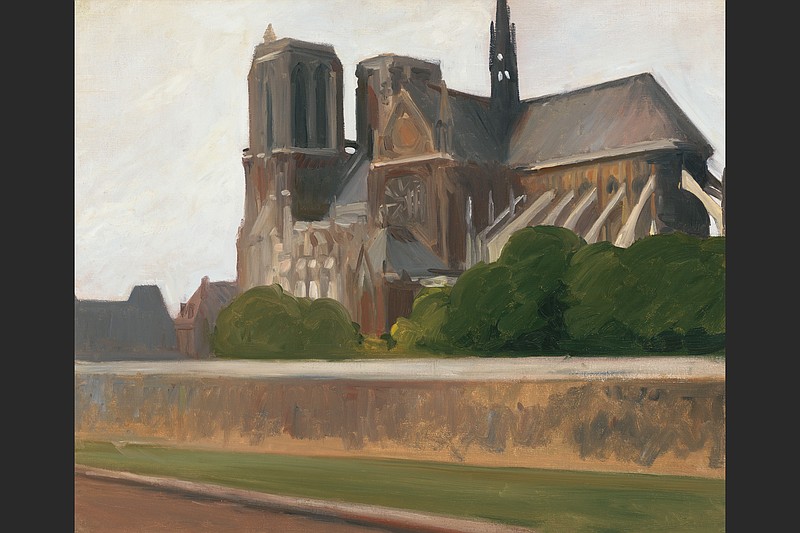 When Edward Hopper painted Paris’ iconic sights, his images were unsentimental. In “Notre Dame, No. 2” (1907), Hopper cuts off Notre Dame’s spire and paints the wall blocking the cathedral with more attention than the building itself. (Whitney Museum of American Art/Josephine N. Hopper Bequest)

In 2020, many of us, having traveled nowhere, woke up in what felt like foreign cities.

On our streets, we found strange customs, new sights. To this day, windows remain dark. Buses carry rattling seats. Our shadows seem to grow taller. The rare passerby darts to the edge of the sidewalk. An anti-greeting of sorts. The language spoken here is that of emptiness: water pipes whisper, buildings sigh, streetlights hum.

Walking through these lonely cities, you might become as grandiose as a young traveler — believing you own the streets for having set foot on them. You might feel so dissociated that, confronted with a storefront window, you jump at the sight of your reflection.

Early on in the pandemic, Twitter deemed American realist Edward Hopper the painter of the moment. His solitary figures — seated in diners or gazing out windows — circulated like memes, ostensibly capturing this growing sense of isolation.

It is enticing to believe that our coronavirus-induced loneliness is so interesting as to be worthy of artistic representation. Wouldn't it be nice to sit in solitude with the serenity of the figure sipping coffee in Hopper's "Automat"? Or to look outside with the anticipation of the woman in "Cape Cod Morning"? His figures gaze out windows because they are drawn to whatever lies beyond them. We gaze out windows because we are stuck behind them.

In this moment, we might instead look to a younger Hopper. The artist would go on to become a master of psychologically charged images, but when he visited Paris for the first time at 24, he was simply searching for a style in a "paintable" place. In a city as unknown to him as his nascent artistic voice, the perceptive skills that would power such later images as "Nighthawks" were less deftly wielded. They turned inward, to his own psyche. In Paris, he painted the city as someone outside of it. He painted our cities: impermeable, alien and at once impossibly distant and suffocatingly close.

Hopper traveled to Paris in 1906 during the waning la Belle Époque, "the Beautiful Era," leading to World War I. It was the Paris of Pierre-Auguste Renoir's tangled lunchers and Gustave Caillebotte's sauntering flâneur. The capital of the art world throughout the 19th century, the city was a destination for such American artists as impressionist Mary Cassatt, who settled there in 1874, and cubist Max Weber, who lived there during Hopper's visits. By that time, the iconography of Paris that would lodge itself in contemporary imaginations had just been built: the Eiffel Tower, the broad boulevards, the domed department stores.

In letters home, Hopper wrote of lively streets "thick" with crowds. He commented on locals' indulgence in the pleasures of nightlife and praised the Parisians' appreciation of art. With uncharacteristic expressiveness, he wrote that he had never been better.

The paintings from his three trips to Paris in his 20s — which were recently on view at the now-closed Phillips Collection in Washington — suggest more complex emotions. Hopper existed on the periphery — his lodgings were not with fellow artists but at a Baptist mission near the Seine, an arrangement set up by his church back home in Nyack, N.Y. He didn't study at one of the art academies or submit to the famous salons. And decades later, he would say that he hadn't met anyone of importance there. Hopper's Paris is not that of postcards or even the Paris of his letters. Hopper's Paris is empty.

His earliest Paris paintings feature his immediate surroundings, at 48 Rue de Lille, as subjects; they are liminal, claustrophobic spaces. In a painting of an interior courtyard, a drawn white curtain reveals only darkness. Another places the viewer in the middle of a stairwell. At the top, there is a closed door. At the bottom, the railing seems to block the stairs. No way up, no way down, we are left in a perpetual right now. 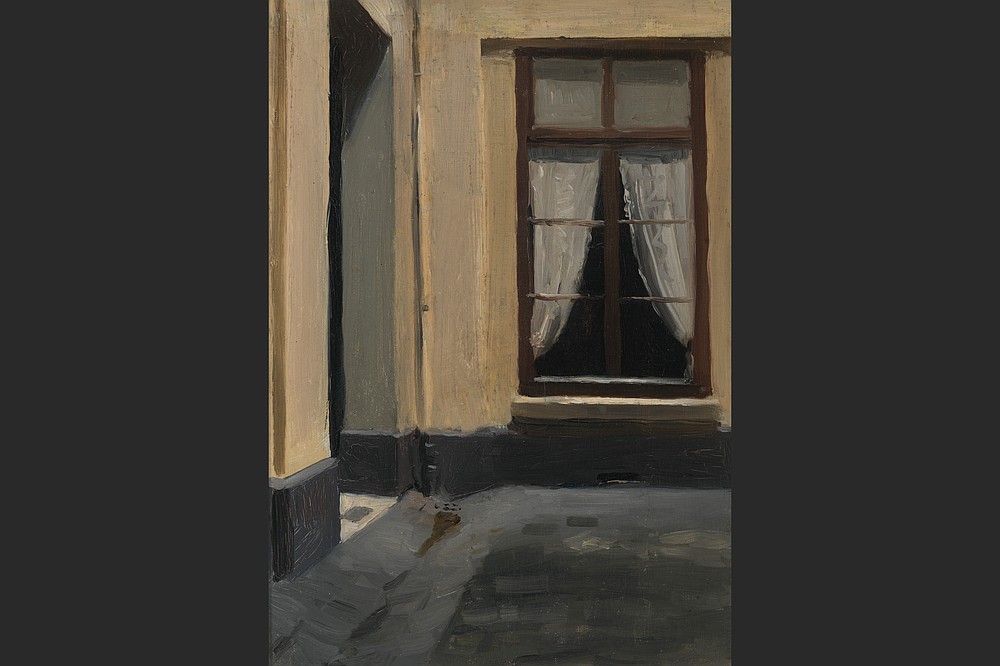 THE MORE YOU LOOK

In "Le Parc de Saint-Cloud," fragments of architecture — a roof, a bridge — function like bits of overheard dialogue on a quiet street. The little you can perceive is electrified by all that is withheld. The more you look, the more you have to look.

When Hopper turns to Paris' iconic sights, they are distant, unsentimental. He obscures the Louvre's Pavillon de Flore with bathhouses. He cuts off Notre Dame's spire and paints the wall blocking the cathedral with more attention than the cathedral itself. Like the shuttered buildings now lining our downtown streets, these are not spaces to be entered. Museums, churches, libraries — for Hopper and for us — are aesthetic objects, their function nearly forgotten.

Some might think that Hopper was missing the point — as would a tourist who is enthralled with the paintings in his hotel room or snapping photos of the president's shoes at the Lincoln Memorial. But Hopper's early paintings succeed in the way they grapple with uncertainty.

They don't depict Paris as much as they depict a familiar estrangement. And now, we are all young Hoppers in courtyards: fixating on that which is directly in front of us, clinging to its certainty. We, too, are anonymous tourists, extracted from society, cast outside of the institutions that once may have helped us understand it.

Around the time Hopper visited Paris, French photographer Eugène Atget captured a similarly empty city. Walter Benjamin, a midcentury German Jewish philosopher, described those photographs as "not lonely, merely without mood." Atget's Paris, Benjamin said, "looks cleared out, like a lodging that has not yet found a new tenant." In Hopper's paintings, he is a prospective tenant, seeing the city with fresh eyes, finding his footing.

Viewing one of Hopper's Paris paintings, you're not always sure where you stand. Whereas a painter like Caillebotte positions you decisively in the streets of Paris, the sidewalk in Hopper's "Les Lavoirs ... Pont Royal" is so wide you could swim in it. Framing devices appear as afterthoughts: a hastily drawn handrail — the only thing to hang onto in his daunting "(Bridge and Embankment)" — threatens to fall into the Seine. A wispy tree — positioning us in the foreground of "île Saint-Louis" — risks drifting off with the clouds. And yet their presence — however fickle, impermanent, haphazard — is a vote of confidence in our lonely stroll through unfamiliar streets.

It is as if in the final moments of painting, it dawned on Hopper that he — we — might just be able to find our place here.