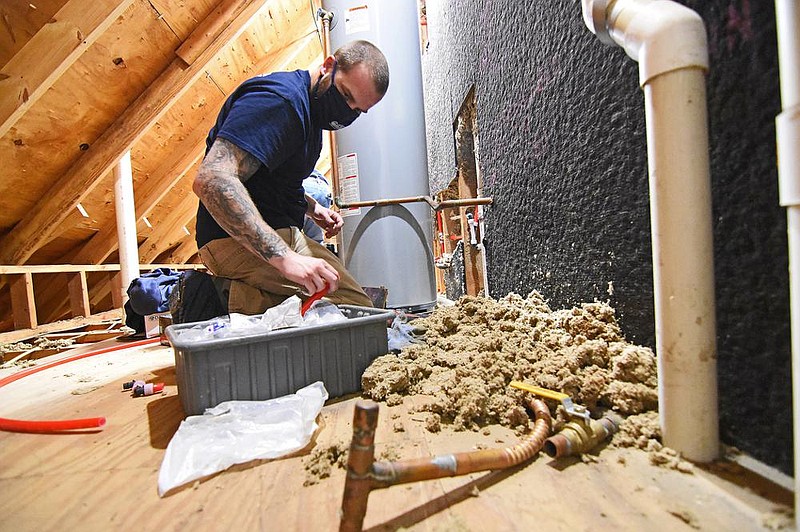 WARD -- The slow but steadily growing number of homes with leaky copper pipes is no surprise to the more than 900 followers of Cabot-Ward Leaks on Facebook.

Owners of nearly 250 homes that use Ward drinking water have had to replace some or all of their pipes, and some neighbors not yet affected worry they may be next, several residents said.

Real estate agent Daniel Sallinger began managing the online page that started in March 2019 after he experienced the now-typical pinhole leaks, which led to over $40,000 in repair and replacement costs, he said.

Sallinger, with the help of a few others who went door to door, have kept track of the homes affected and the list continues to grow, he said. The confirmed 220-house count has more than doubled since the 100 publicly reported a year ago, according to Sallinger's map.

All the Ward, Cabot and Austin houses affected are on the Ward Water and Sewer System, which started receiving calls regarding water leaks in January 2019, according to a Copper Water Pipe Failures report by the city.

The system gets its supply through the Lonoke-White Public Water Authority from Greers Ferry Lake. Several other systems use this water source: Austin, Beebe, Furlow, Grand Prairie/Bayou Two, Jacksonville and Mid-Arkansas Utilities Vilonia Water as well as Ward are all represented on the Lonoke-White board.

Ward Mayor Charles Gastineau said that the problems have been discussed at board meetings, but to his knowledge, no other areas are affected.

"There's lots of theories, but you can't replicate the theory to say, 'This is the cause'. That's the headache and frustration for not only the homeowner but for my administration and other administrations also," Gastineau said.

'UNTIL IT HAPPENED TO ME'

Many residents attended a May 2019 town-hall meeting in Ward about the pipe problems and directed questions to Gastineau and Cabot Mayor Ken Kincade, who did not return calls and messages left with his office Wednesday and Friday.

"There were a lot of people throwing ideas out that really didn't make much sense," Sallinger said.

Kirk Hendrix, a resident in south Ward on Apricot Drive, heard about the leaks but didn't worry about it when he moved in about two years ago.

"I'd seen on Facebook people crying about the leaks and blah, blah. I'm just thinking they're complaining, until it happened to me," he said.

The Ward water system checked pressures, collected samples, reviewed 25-years of data and created a list of affected houses in February of 2019, finding nothing that stood out as abnormal, according to the city's report.

In March, the state Health Department took pH levels and sample pipes for analysis and increased the frequency of lead and copper testing for the Ward system and the Lonoke-White Public Water Authority. The department contacted "one of the leading researchers in the nation concerning water corrosion control," according to the report. The U.S. Environmental Protection Agency also got involved.

All samples came back within the normal limits and under EPA guidelines, according to the report.

In April 2019, the Health Department pasted a Facebook notification and mailed a leaflet to all Ward water system customers offering free lead and copper testing. Residents said they don't remember getting anything from the city about the concerns.

Gastineau maintains that the problem could lie with the three large, privately owned pipelines -- the newest of which was added about four years ago.

The loss of the cathodic protection in one of those pipelines could lead to electricity leaching out and causing copper pipes to turn green and show pitting. This is also why pipe failure can happen when it's placed too close to a train track or tram line, according to case studies in Construction Materials' June 2016 volume.

The Ward system tested for stray voltage and found stray DC voltage in March 2019, according to the city's report. Ward contacted Magellan Pipeline and Enbridge, owner of Texas Eastern Pipeline, to ask it to test the pipelines. Everything appeared intact and normal, according to the city's report. Because these are interstate lines, any request for an independent inspection would have to be made at the federal level, Gastineau said.

Sallinger disagrees that electricity leaching is the problem because only a few areas around the newer pipeline are currently affected, according to research he and other volunteers have done. Some homes affected did not see problems until they switched from well water to Ward water, he said.

According to the residents' reports to Sallinger, the homes having a lot of problems are both east and west of the pipeline. On the west side, no homes on the Cabot water system -- which are between some affected houses on the Ward system -- have reported pinhole leaks.

Some researchers, engineers and plumbers have said the problem could be pH imbalance, settlement or the chemical treatment of the water. But Gastineau said, if that was the case, the whole Lonoke-White system should be affected, and the city does not add any chemicals.

Sallinger paid for his own study in April last year from Secat Inc. research laboratory. The corroded pipe samples he provided from several homes were a mix of copper sulfate and copper oxide with traces of chlorine, according to the test results Sallinger provided the Arkansas Democrat-Gazette.

The presence of chlorides and sulfates at the corrosion sites with traces of phosphorus indicated that chlorine and sulfur in the water were probably the cause of the corrosion, according to the results.

The city continues to do the routine lead and copper testing required by the Health Department. It has no plans to do any more testing, Gastineau said.

The last laboratory analysis showed the water quality of the Ward system was within the allowable limits of the National Drinking Water Regulations for Lead and Copper, at 0.015 mg/L for lead and 1.3 mg/L for copper and in the 90th percentile for both, according to a Health Department letter to the Ward system dated Aug. 13.

"There is not a generalized corrosion problem in the Ward system. The lead and copper results are low. We have checked these parameters for folks who have made a request and we will continue to do so. This has not shown any notable lead or copper corrosion. I do not know why an area of the Ward system has had pinhole leaks," said Danyelle McNeil, Health Department spokeswoman.

"We have quite a bit of sample results from the past, but they don't identify a cause of some folks having the pinhole leaks," she added. "The monitoring results do not show any increase in overall corrosion in the system."

Other cities around the country have experienced what appears to be the same or similar problem, Gastineau said

"This phenomenon happens all over the country; it's not just isolated to us," he said. "I would love to point and say, 'This is the cause and if you do this it won't happen again'. If someone could figure that out, they'd make a whole lot of money."

The mayor specifically referred to a 2004 Pinhole Leaks in Copper Plumbing report from the state housing department in Maryland. A state task force could not find the problem.

Some homeowners have had expenses as high as $80,000 related to the leaky pipes, often finding their insurance doesn't pay for pipe replacement. Others said they've had trouble getting home insurance when this is already a known problem.

Homes affected were built from 1979 to 2018 and include those with slab foundations and crawl spaces, according to the Facebook page and Sallinger.

Some residents around Mark Lynn Circle on the Ward system and near downtown have just recently reported problems to Sallinger. Gastineau said the city has not been made aware of some of these recent concerns.

Hendrix's house flooded in mid-January. The kitchen is gutted and all floors are ripped up, amounting to $20,000 so far and about $4,000 out of his pocket. He said he noticed his hot water tank is rusted. His house is 6-8 years old, he said.

Mary Johnson has owned her house in southeast Cabot on Bradley Drive for about a year and has had five leaks in that time, she said. She had new hot-water pipes when she moved in and has had all those on the cold-water line replaced. She's out about $2,250 after insurance, she said.

"We have not gone longer than three months without a leak. Insurance does not pay for pipe replacement. Only for damage done to the house by the water," Johnson said. "Ward assured me that they have tested the water and that the water is good, but I bought a reverse osmosis water filtration system just in case, because that's exactly what they told the people of Flint, Mich."

Jake Sisson, a real estate agent and resident, has replaced some of his pipes and anticipates having to replace the rest because of future leaks, he said.

Sisson and Sallinger said some other residents they've talked to simply can't afford repairs or to replace all their pipes at once. They said they worry about how the pipe problem will affect home values, mortgages and insurance premiums. Several people have had their insurance canceled after they filed a claim, Sallinger said.

On top of the thousands Sallinger had to shell out to replace the copper pipes with cross-linked polyethylene -- known as PEX -- his new hardwood floors, and other damage to his Cabot home on Cherry Drive, he said his dog Rio also became sick.

Rio, a fluffy Pomeranian, lost half his body weight and could barely walk. When Sallinger switched to giving him bottled water, Rio regained full weight within a few months and is running around again.

Sallinger installed an activated charcoal filter after the pipes were replaced, which makes him feel comfortable enough to drink his tap water again, he said.

Other residents have installed this type of filter, some 20 years ago. The pipes after the filtration system appear to be normal, he said. Any pipes in use before this filter is installed could already be damaged though, he said.

"We're following closely a house that was identified as having a filtration system installed approximately 20 years ago," he said. "The residents stated the supply line from outside the house to the filter system had developed a leak, however [the pipes] after the filter are normal and leak free."

Mayor Gastineau said he hates what's happening on numerous levels, from the cost involved to the anxiety of homeowners who fear their homes could be next.

"That's frustrating on everyone's part," he said. "I don't believe it's a Ward water issue... We're not at fault to make a payout. That's what some people want; I've had conversations with several customers who want us to at least pay their deductible. We're ... not to blame and therefore can't expend taxpayer money."

Gastineau said anyone experiencing problems should contact the city.