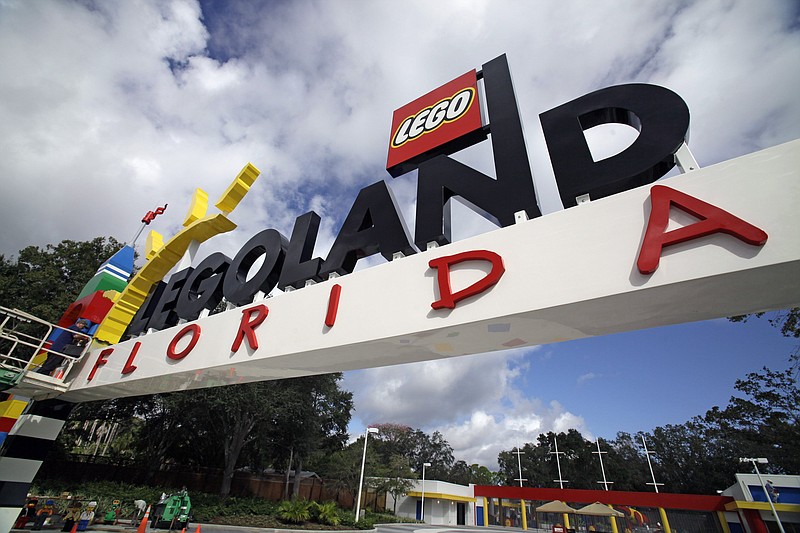 In this 2011 file photo, a worker puts finishing touches on the entrance sign at Legoland Florida in Winter Haven, Fla. The Legoland theme park in Florida is installing tents over the entirety of its MiniLand USA … tiny versions of American cities and landmarks. (AP Photo/John Raoux)

ORLANDO, Fla. — Legoland Florida is about to throw shade in the nicest possible way. The theme park is installing tents over the entirety of its MiniLand USA, a popular area featuring tiny versions of American cities and landmarks.

Work was expected to begin last week and is scheduled to be completed by summer, says Rex Jackson, general manager of the Winter Haven attraction.

"It's meant to be both providing shade but also, during the summer season, protection from the wet weather as well," Jackson says.

"The sides will be open. That will allow airflow to move throughout," Jackson adds. "But it is a rather large shade structure that is meant to be a permanent installation." A lighting package will enable effects inside the structure during special events, he says.

The addition is designed to make MiniLand even more of a "dwell area" for visitors, he says. This section of the park showcases little-brick representations of the White House, the Golden Gate Bridge, Empire State Building, the Las Vegas Strip and Florida landmarks, such as Daytona International Speedway and Kennedy Space Center.

For a decade, the park's figures have cooked in the Florida sun. MiniLand has had less natural shade than much of Legoland and its nearby gardens.

"While the shade structure is meant to enhance the guest experience, there is a maintenance aspect to that as well because it is going to help us improve the longevity and the appearance of our Lego models that we have in many lands," Jackson says.

The MiniLand covering is one way Legoland Florida is celebrating its 10th anniversary. Next up: "Brickbeard's Watersports Stunt Show," scheduled to debut Feb. 12.

"We had a water-ski show, when we opened the resort back in 2011, that was a nod back to the Cypress Gardens days," Jackson says. "But this is going to be a brand-new show with a brand-new storyline, brand-new characters, including a character that was co-developed with Lego."

The show's debut will coincide with a new event called PirateFest Weekends.

Legoland also plans to give more visibility to its "master model builders," the employees who create the Lego figures, in 2021.

"They work in a workshop that is a little bit behind the scenes today," Jackson says. "We want to make sure that all of our guests that visit get to see what it is that happens inside a real-life, working workshop."

Other forthcoming activities include a new "4D" movie, "larger-than-life" brick models and a stage show for the Lego City area, the return of Lego Friends Weekends and an expanded summertime celebration called Awesummer with fireworks and live entertainment.

"We attempted to have a lot of news throughout the year ... with our guests to celebrate all the great things that we have in Legoland Florida and all the new things that we're bringing," Jackson says.