No shovels needed: Hogs get early jump, cruise to victory 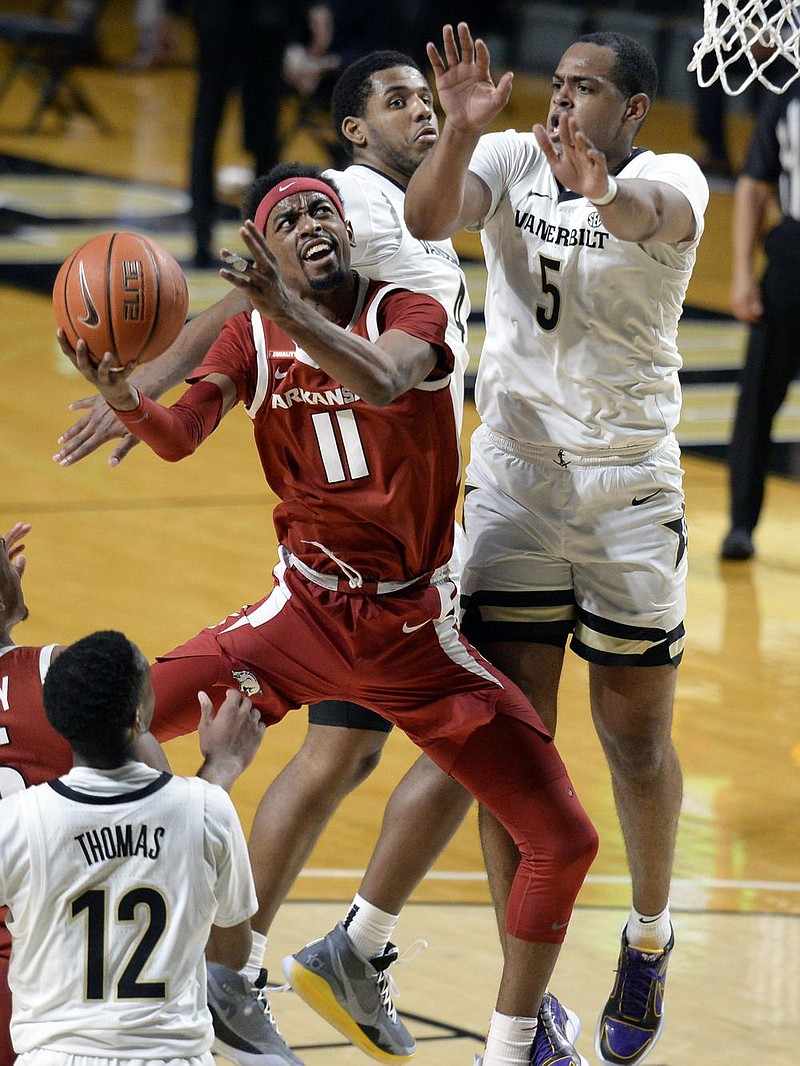 The Arkansas Razorbacks didn't have to dig out of a big hole against Vanderbilt on Saturday.

After trailing in the first halves by a combined 75 points the previous three games against LSU, Alabama and Auburn, the University of Arkansas started fast and maintained control in beating the Commodores 92-71 at Memorial Gymnasium in Nashville, Tenn.

It was Arkansas' largest margin of victory in an SEC road game since an 84-48 rout at Vanderbilt on March 6, 2019 at Memorial Gymnasium.

"I'm sure when we do our clean-up film that we'll find something. We usually do," Arkansas Coach Eric Musselman said when asked if there was anything about the game he didn't like. "But not often do you go on the road and lead for 39 minutes and the opponent doesn't lead in a game for one second."

"This team won their last game, but they haven't been a confident team over the past three or four games," Vanderbilt Coach Jerry Stackhouse said. "And we gave them confidence to know they could come in here and make shots and pretty much get what they wanted.

"We gave up nine quick points. It was just kind of a snowball from there. They just got us on our heels because of a lack of attention to details and things that we should understand how to do at this point."

"I think we really just stopped thinking," said Arkansas senior forward Justin Smith, who had 12 points, 7 rebounds and 2 assists in his third game after undergoing ankle surgery. "I think we were thinking too much and were worried about making a mistake.

"We kind of got away from that and just said, 'Forget it.' We really just went out there and played our game and played how we know how. I think that's made a really big difference with our confidence, because once you make plays, the confidence keeps growing as an individual and as a team."

Freshman guard Moses Moody led Arkansas with 26 points and hit 10 of 16 shots and 5 of 5 free throws. Nine of his baskets were two-pointers.

"I thought he was great around the rim," Musselman said. "He didn't settle from three. I thought he ran the floor really hard. I thought he really, really ran exceptionally well in transition."

A week earlier at Alabama, Moody scored 28 points in a 31-point loss.

"We have a lot of scoring options," Moody said. "The Alabama game a lot went wrong. A lot of shots weren't falling.

"It was just a lot of stuff going bad, but this [on Saturday] is what we really do."

"It gives us a really big lift, especially when he's aggressive," Smith said of Tate's all-around game. "He's very dynamic and it makes the rest of our jobs a lot easier."

The Commodores also were missing some other players, but Stackhouse blamed the lopsided loss on his team's lack of execution on defense, not a depleted roster.

"That was like a game at the park where [the Razorbacks] were saying, 'OK, I'm going to take my man,' " Stackhouse said of the Commodores' inability to stop drives or provide help defense. "There wasn't a whole lot of scheme. They just broke us down and attacked us downhill.

When the Razorbacks weren't attacking in the paint, they hit 8 of 19 three-pointers. Tate hit 3 of 5 from beyond the arc and senior forward Vance Jackson hit 2 of 2.

"I thought the shot selection from three was probably our best of the season," Musselman said. "We shot the three when our feet were set.

"I guess we took one step-back three off the bounce [by Desi Sills] that wasn't a good shot. But other than that I thought our three-point attempts were really clean and good looks."

The Razorbacks had 22 assists compared to 11 turnovers.

"We wanted guys to play with great freedom from a mental standpoint," Musselman said. "We tried not to run a lot of half-court sets.

"We've added a few things to our open offense and our opportunity break when we're playing out of the flow of the game. I thought some guys really got into their comfort zone offensively. I thought we had really good spacing."

Arkansas beat Vanderbilt for the seventh consecutive time and 11th time in the teams' last 12 meetings.

The Razorbacks have won four in a row at Memorial Gymnasium to even their record at Vanderbilt to 8-8 and won back-to-back SEC games for the first time this season.

"It feels good," Musselman said. "Obviously it's going to be a nice weekend for everybody."