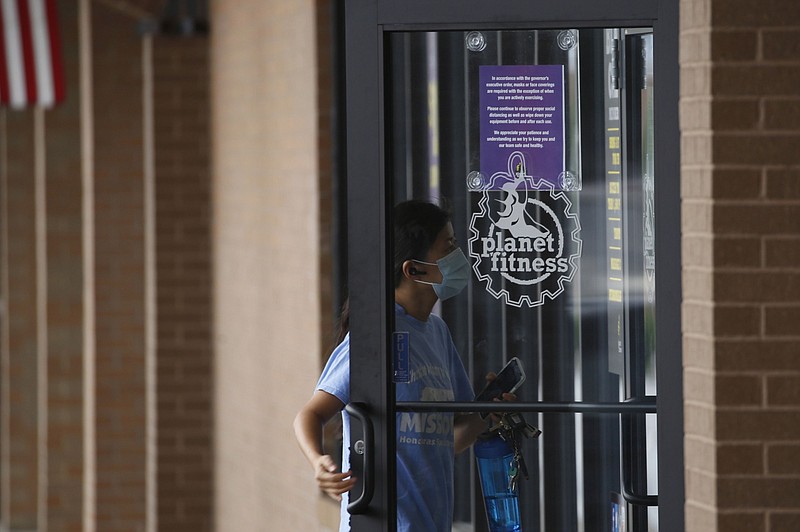 After a year in which people spent months cooped up at home getting little exercise, New Year's resolutions have taken on a little more weight in 2021.

The fitness industry can attest. Despite the coronavirus restricting gym capacity while shuttering some entirely, the traditional January spike in memberships has matched -- and in some ways exceeded -- those of years past. Part of that can be tied to the predictable explosion of online classes, and a move toward maintaining mental as well as physical health.

"It's not about bikini body goals, because who knows when we're going to go on vacation again," said Josh McCarter, chief executive officer of the fitness booking platform MindBody. "Covid-19 has pushed people to think about health more holistically."

MindBody said it's on track to match the 30% increase it usually sees in the new year, largely thanks to the shift to virtual workouts. About 50% of the platform's virtual bookings are now for yoga as more customers seek classes focused on mindfulness. "In addition to physical well-being, one's emotional, mental and spiritual fitness has become a bigger priority."

The online shift is contributing to what experts said will be a permanent change to how the $32 billion industry works. While 75% of consumers surveyed said they will eventually return to pre-pandemic routines and the actual gym, many indicated that they will retain a virtual component -- a phenomenon with broad implications for the sector.

Covid-19 has accelerated adoption of a hybrid model of online/in-person workouts that more brick-and-mortar gyms are likely to retain when the pandemic recedes. Fitness-club owners grappling with declining memberships have quickly caught on, with 72% now offering on-demand and live-stream group workouts, up from 25% in 2019, according to fitness research firm ClubIntel.

At the peak of gym closures in March, McCarter said class bookings everywhere fell as much as 85%. In the U.S., the return to in-person studio classes has been uneven, thanks in part to varying state and local restrictions. In New York and California, for example, bookings were roughly 50% of 2019 numbers, whereas in states such as Arizona and Georgia they were down only 15%.

Lifestyles that became suddenly sedentary -- with no commuting, no travel, and lots of working from home and remote-learning -- upended fitness regimes. A November study by ClubIntel of 2,000 U.S. gym members revealed that 54% of those surveyed either froze or canceled their memberships.

For people who have continued some kind of exercise routine, virtual fitness has been key. Home workouts were gaining traction even before covid-19, led by companies such as Peloton and Mirror. Since the start of the pandemic, some 80% of fitness consumers live-streamed workouts compared with 7% in 2019, according to a MindBody survey.

By September, when more than 87% of fitness clubs across the U.S. had reopened, 60% of members still didn't return to gyms, while 20% had stopped exercising altogether, according to ClubIntel.

"When their commuting patterns change, workout patterns change," said Jason LaRose, CEO of Equinox Media, a subsidiary of Equinox Group tasked with expanding the luxury gym operator's digital platform. Even with the covid-19 vaccine rollout slowly underway, the in-person fitness experience is still marred by fear and will remain so for some time to come.

Of the respondents who stopped going to a gym, 57% cited a lack of confidence that covid-19 was sufficiently under control to warrant returning, ClubIntel's study found.

The shift to virtual workouts, however, increased access to different types of classes. It also highlighted the need for balance between physical and mental well-being, LaRose said.

"We've seen an incredible uptick in meditation since the beginning of the pandemic," LaRose said. And interest is continuing in the new year -- he cited a 25% increase in meditation classes for the week ending Jan. 2. "It's a testament of how people's thinking around overall wellness has been expanded."

While 2021 may be looking up for the industry, 2020 was a nightmare for gyms and physical fitness. States began mandating health club closures in mid-March. By April 6, 48 out of 50 states had forced gyms to shutter. During this time, physical activity levels in the U.S. declined by 48%, according to health data analytics platform Evidation.

As some lockdown orders and business restrictions lifted in May, gyms predominantly in the South and West began to reopen, part of a regional trend that presaged the second, summer wave of infections. As that surge ebbed, more closures were lifted at fitness facilities in other regions, including states such as New Jersey, New York and Michigan.

But the damage was already done. The fitness lobby group International Health, Racquet and Sportsclub Association estimated that as of Sept. 30, 15% of gyms had permanently closed. It also reported that the industry lost more than $15 billion in revenue and cut 480,000 jobs. Several large brands have filed for bankruptcy since the pandemic began. Gold's Gym, 24 Hour Fitness, and Town Sports International (which includes New York Sports Clubs), all filed for Chapter 11 restructuring. Meanwhile, Flywheel filed for Chapter 7 and closed all of its studios.

Chris Rondeau, CEO of the gym chain Planet Fitness, said that -- on average -- workouts at facilities are at about 70% of last year's volumes, compared with 30% when it started reopening in May.

At the onset of the pandemic, the company increased digital content on its app and launched a digital subscription in November for $5.99.

"A legacy of the pandemic is that people know how to juggle various things at home now. When the pandemic dies down, digital options will be a substitute they're familiar with if they don't have time to make it to the gym," he said. "It's ingrained in habits now."

Most virtual workouts can be done via mobile phones, iPad or a laptop. It's as easy as propping up a device on a coffee table and following along in your living room. Some are pre-recorded and allow for pausing or rewinding. Others are live-streamed, which helps mimic the experience of exercising with a group.

Though 2,100 of its 2,800 physical locations are now open, the company dialed down its marketing efforts significantly in 2020. "It's not as much a cancellation issue as it is a join issue because we weren't driving sales," Rondeau explained. This year is still an open question.

"The first four months of the year are always really important for us," he said. "We've seen people excited about returning, but we're still going to have to claw our way back."

Over at Equinox, the chain responded to March lockdowns by launching Variis, a streaming app that offers on-demand fitness content. It seeks to re-create the in-person experience of cult-favorite fitness brands like SoulCycle (which is owned by Equinox), Precision Run and Pure Yoga.

With the exception of cycling, most classes on Variis require minimal equipment, from dumbbells to a yoga mat. Equinox sells its SoulCycle-branded at-home bike for $2,500, a purchase that also grants users access to the entire Variis platform, which would otherwise cost $40 a month. Equinox members get access for free as part of an in-person gym membership.

According to LaRose, members who use the app are working out almost 20% more per month compared with last year, a sign that even as some studios open their doors, virtual workouts remain a sizable part of routines. Whether people have an hour in between Zoom meetings or just 10 minutes, many are squeezing in multiple virtual workouts every day across a range of modalities, including running, circuit training or Pilates, he said.

The pandemic has also heightened the importance of cardiovascular health. Obesity can triple the risk of hospitalization due to covid-19, decreasing lung capacity while impairing immune function. "People are getting a head-start on strengthening their overall health thanks to virtual workouts," McCarter said. "It also breaks down the 'gym-timidation' that deters some people from going to a studio in-person."

While big health clubs like Equinox and Planet Fitness haven't increased membership prices, the cost per in-person class at boutique fitness studios rose 20% on average, according to McCarter. Restrictions on capacity and operational expenses tied to the pandemic were to blame. However, prices for virtual classes dropped about 20%.

"The future is a blend of digital and physical. Despite the fact that some of the storefronts are shrinking, consumer demand is booming as people aim for a balance between mental and physical health," LaRose said. "The stakes are higher now."