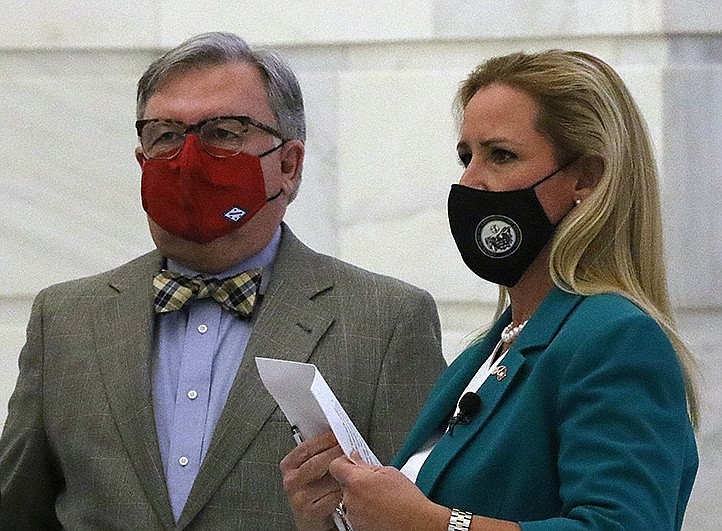 The salary for Webb -- who previously was chairman of the Republican Party of Arkansas -- is commensurate with what's paid to other department heads with extensive public service experience and/or specific expertise, said Rutledge's spokeswoman, Stephanie Sharp.

Webb also is a former state senator, former chief of staff for the late Lt. Gov. Win Rockefeller and former counsel to the Republican National Committee.

Rutledge, Gov. Asa Hutchinson and Secretary of State John Thurston comprise the state Board of Apportionment, which redraws the boundaries of 135 legislative districts every 10 years based on information from the U.S. census. All are Republicans. (The congressional district boundaries are drawn by the Repub­lican-majority Legislature.)

Asked by the Arkansas Democrat-Gazette about Rutledge's hiring decision, Hutchinson said Friday in a written statement, "I was unaware of the AG's announcement until shortly before the news conference. I was not aware of any financial arrangements. ... The AG has independent authority to make decisions on her office structure and I respect that independence."

Sen. Bill Sample, R-Hot Springs, said, "I had somebody else that is working on redistricting ... [who] said, 'D*, I feel like we are working for free.'"

"It is surprising that we would go out and pay that amount of money for something that has been done in-house in the past," Senate Democratic leader Keith Ingram of West Memphis said.

The Republican attorney general's salary is $142,092 a year.

In a news conference in the Capitol rotunda Tuesday, Rutledge announced Webb's appointment, along with her office's contracting with former state Reps. Andy Davis, R-Little Rock, and Doug House, R-North Little Rock, for $6,666 a month each to also work on redrawing the boundaries of legislative districts.

Webb and House are attorneys. Davis is an engineer.

Asked how long they will work for the attorney general's office, Sharp said the three "will be working on redistricting, and we do not know the exact timeline because the [U.S.] Census data has been delayed."

Lt. Gov. Tim Griffin, who, like Rutledge, has announced plans to seek the GOP nomination for governor in 2022, said that "with over 175 employees, Leslie should be able to handle redistricting without spending another penny.

"But we have all watched her establish a pattern -- including the notorious 'Rutledge Report' -- of wasting taxpayer dollars to promote herself," he said in a written statement.

Asked why her existing staff couldn't handle redistricting duties, Rutledge said in a written statement, "Based on my experience working on redistricting nationally in 2010-2012 for the Republican National Committee, I know first-hand the complexity of data and legal issues that may arise while carrying out this extremely important constitutional task that only happens once every 10 years.

"While the attorney general's office has the largest staff of any other constitutional office except for the governor, on any given day my office is handling thousands of cases, hundreds of investigations, 2,000-3,000 constituent calls and consumer complaints, and advising state agencies, boards and commissions as well as reviewing 1,500-2,000 bills filed and advising legislators during a hectic legislative session.

"As an experienced leader and manager, I hired one full time staff member to fill a vacant position and two others on contract with legal and legislative expertise to lead my team with this extraordinary task to ensure Arkansans have fair and legal legislative districts for the next decade," Rutledge said.

Former Attorney General Dustin McDaniel, a Democrat who served on the Board of Apportionment in 2011, initially declined to comment last week when asked whether his office hired anyone to work on legislative redistricting at that time.

Several people who participated in that effort said McDaniel relied on the existing staff and didn't hire additional help. McDaniel later confirmed that. He declined to comment on Rutledge's staffing decisions.

In April 2011, the Board of Apportionment included then-Gov. Mike Beebe, a Democrat, and then-Secretary of State Mark Martin, a Republican. Beebe and McDaniel voted -- with Martin dissenting -- to hire former secretary of state's office attorney Joe Woodson Jr. as the board's director. They gave Woodson autonomy from the elected officials.

At that time, Woodson asked for the separation "given the politically charged atmosphere that we're in," according to Democrat-Gazette archives.

In March 2011, Beebe announced that Martin's office had spent nearly $70,000 meant for state legislative reapportionment to buy a vehicle and hire former state Rep. Timothy Hutchinson, R-Springdale, as the board's director without the board's approval. Martin later reimbursed the board about $60,342, including funds for the vehicle, Legacy Consulting and Timothy Hutchinson. (He is a nephew of Asa Hutchinson.)

Thurston has hired Richard Bearden of the Impact Management Group to work on legislative redistricting because the Board of Apportionment in the past has hired outside consultants, Powell said.

"In hiring Richard Bearden, we were looking for assistance in outreach with legislative members," Powell said. "Richard and the Impact Management team have a wealth of knowledge with the Legislature and the legislative districts that we are going to utilize as we navigate the redistricting process."

Impact Management Group's contract started Jan. 1 and runs through Aug. 31. Its projected cost is $40,000, according to a copy of the contract provided by Thurston's office.

The contract states that Impact Management Group will use its relationships developed over more than 20 years of lobbying, political campaign support and personal outreach to gather information from and provide information to Thurston's staff members involved in redistricting.

Impact Management Group "will set up meetings with citizens and affected parties during the redistricting process in order to assist in the formulation and redrawing of districts in a manner that meets all applicable federal and state laws, takes into consideration communities of interests, and avoids gerrymandering, and which adheres to the standards of the Board of Apportionment," according to its contract.

Martin, who served as secretary of state from 2011-19, said in an interview Friday that he hired Timothy Hutchinson to reach out to counties during the redistricting process.

He said his office hired Chad Gallagher's Legacy Consulting to reach out to cities. Gallagher had been an aide to former Gov. Mike Huckabee and is a former mayor of De Queen.

In the interview, Martin said that among his office's employees, Rett Hatcher, Kelly Boyd and Roy Ragland worked on legislative redistricting. Ragland is a former representative.

In 2012, Martin hired Asa Hutchinson as an attorney to represent his office in a legislative redistricting case. Asa Hutchinson became governor in 2015.

Beebe said in an interview that his then-aide James Miller was "the point person" on redistricting in 2011 and some other employees in his office might have helped Miller.

He said the governor's office then didn't hire employees or consultants to work on redistricting.

On Tuesday, Hutchinson said he asked his deputy chief of staff for external operations, former Rep. Bill Gossage, to lead the redistricting team in the governor's office. Employees Andres Rhodes and Nicholas Ortiz will help in the process.

Hutchinson's spokeswoman, Katie Beck, said Tuesday that Hatcher will provide feedback to the governor from stakeholder groups concerning legislative redistricting and will be paid out of inaugural funds from the state Republican Party. Besides past experience working for Martin, Hatcher is a lobbyist and a former aide to the governor.

Asked why he decided to tap state GOP funds to pay Hatcher for that work, the governor said Friday, "I wanted someone outside of my office to have a role, and it made sense to use someone with experience and who can work with both Democrats, Republicans and Independents.

"The direction from me for everyone involved with districting is to follow the constitutional standards for redistricting," Hutchinson said in a written statement. "Any final decision rests with the governor."

Hatcher will be paid $3,000 per month for eight months, which started in December 2020, the governor said.

"He or she may coordinate town hall meetings in various parts of the state. As to whether the board follows the same pattern this year remains to be determined," he said.