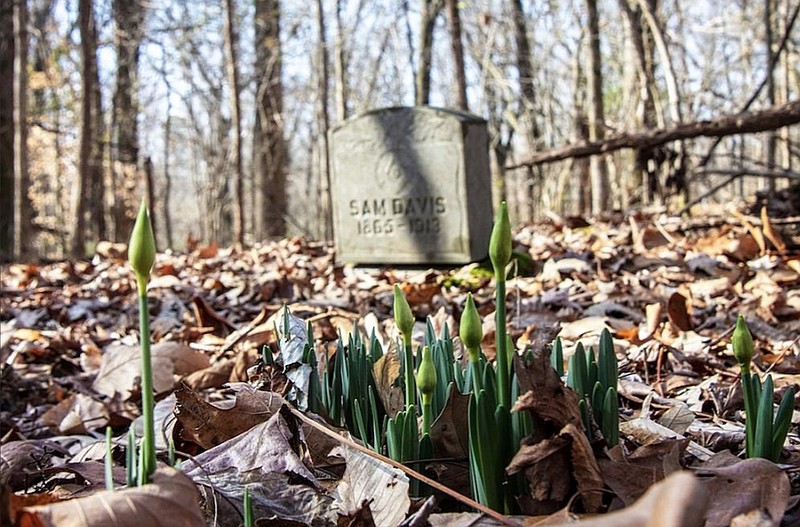 Daffodils by the grave of Sam Davis have started to emerge at a cemetery on Crowley’s Ridge in Forrest City. The Black cemetery, with grave markers dating to the late 19th century, has been abandoned for years. (Arkansas Democrat-Gazette/Cary Jenkins)

FORREST CITY — Atop an overgrown, wooded speck of Crowley's Ridge there is a cemetery.

Its dead were members St. Francis County's Black community and have rested here since at least the 1880s; the most recent interments occurred in the 1960s.

Since then, nature has slowly taken its course as the graveyard sat mostly forgotten. Now, tall oaks stretch high above and in their shadows are younger trees with trunks the size of a forearm. A thick blanket of dry leaves and fallen limbs covers the ground. There is no path through here; follow too closely the person in front and one is likely to get smacked across the face by a thin branch.

Some of the tombstones stand, others have crumbled over time. Some mark the graves of veterans; there are many from 1918-19, when the Spanish Flu pandemic struck the United States.

There are graves marked only with a small metal plaque stuck into the ground, the slip of paper that once identified its occupant long gone. And there are rows and rows of graves with no markers at all, just slight depressions in the soft, dark earth.

Josiah H. Blount is buried here in a family plot. The top of a tall monument that once stood above his grave has toppled off to the side; a thin coating of moss covers his name carved into the base.

Blount was born a slave in Georgia on Sept. 17, 1860. He became an educator and worked with schools in Texarkana, Helena, Hot Springs and Forrest City. He was a 33rd Degree Prince Hall Freemason and longtime chairman of the St. Francis Republican Party.

In 1920, he was the first Black candidate to run for Arkansas governor and received more than 8% of the vote as an independent. He died Dec. 13, 1938, in Forrest City.

Ulrich is a curator at the Delta Cultural Center in Helena-West Helena, where the exhibit "1920: An Exceptional Election Year," tells the story of Blount's campaign.

"He was a very prominent Black Arkansan," Ulrich says. "He was a self-made man and educator. He taught in a small schoolhouse in Forrest City. He speculated in real estate and owned a successful farm and went on to become a public education official. By my estimation, he is the most successful Black gubernatorial candidate between the end of the Civil War and the election of Douglas Wilder in Virginia in 1989."

Blount was also friends with the prosperous Black landowner and businessman Scott Winfield Bond of Madison and with Wallace L. Purifoy, a prominent Republican and a Forrest City lawyer.

Purifoy is also buried at the cemetery.

Adrienne James is the great-granddaughter of Blount. She grew up in Detroit and lives in Dearborn Heights, Mich. Her father is J.H. Blount, III, and he passed down the story of Josiah Blount to his children, affectionately calling James' brothers "Governor."

"Because of all the stories I heard from my dad and the elders of the family, I've always been interested in [Blount's] story and I'm constantly Googling information about him," she says.

A few months ago, she found details about his grave at findagrave.com, which estimates there are up to 1,000 at the cemetery.

"I called my brothers and cousins and let them know that we've got to get down there," says James, who has never been to Forrest City. "I do plan to visit, but the pandemic is holding me back."

Blount may be the most well-known person buried here, but even his story isn't well known.

"A lot of these people and their contributions have been intentionally overlooked and are forgotten," Ulrich says. "There are unsung people in this cemetery that had a local impact and influence. And some had a definitive imprint on state history that is also largely forgotten.

"There are a number of World War I veterans there and they haven't gotten flags placed on their graves on Memorial Day. Their graves haven't been tended to as the grave of a veteran who has fought for their country should be."

Carla Coleman is chairwoman of the Black History Commission of Arkansas and works with the group Preservation of African American Cemeteries. She says she expects the commission and the preservation group to help with efforts at the cemetery.

"It's imperative that we keep that cemetery up and preserve it so that history can be learned and shared," she says. "With the Delta Cultural Center doing [the exhibit] and tying that into the treasure that Forrest City had, it's a great story that needs to be told."

In December, the U.S. Senate unanimously passed the African-American Burial Grounds Network Act, which seeks to better protect Black cemeteries. Even though it focuses on burial sites in South Carolina, the bill also authorizes the Department of the Interior to establish a network within the National Park Service to study Black burial grounds across the country. The network would create a national database and help efforts by historians, archaeologists and preservationists to preserve at-risk sites.

The proposed legislation awaits a vote in the House.

Holly Hope is special projects historian with the Arkansas Historic Preservation Program. She works on cemetery preservation programs and spends a lot of time in graveyards. Earlier this month she visited the Forrest City cemetery with Ulrich.

"Knowing who these people are and not letting them get lost to time is extremely important," she says. "Someone finds a gravestone and looks up who that person is and they find out how this person helped form a county or a community or helped form the economy of a community."

It has been difficult establishing ownership or stewardship of the land, and Ulrich says he hasn't found a deed for the property.

"That's been almost impossible to determine and affirm at this late juncture," he says. "Getting that done is important to the process. The efforts now are getting cohesion and a relationship with the right officials and community action groups to formulate a way to get an easement and organize to clean up the cemetery and determine who the steward will be."

Ulrich is working on an application to have the cemetery placed on the Arkansas Register of Historic Places, which can't be officially submitted until ownership is established.

Evern Culler is 71 years old and is the clerk at First Baptist Church in Forrest City.

Culler is a living link to the cemetery. Her oldest brother, Thomas Culler, who was just 6 weeks old when he died in 1947, is buried there along with some of her other relatives. Her parents never took her to visit his grave, she says.

"He was the oldest, the first child. It was devastating for my parents. It took them a long time to get over that."

Culler believes that ownership of the cemetery could be traced back to some of First Baptist's pioneers.

The church originated from Spring Creek Baptist Church, which was founded in 1867. Construction of the Gothic Revival-style structure, located on Cross Street, was completed in 1914, and the church was listed on the Arkansas Register of Historic Places in 1995.

She remembers a story about three First Baptist families -- the Purifoys, the Williamses and the Bonds — buying the land where the cemetery sits. She has been searching church records to find proof.

Over the decades, as members died or left the area, the graveyard was forgotten, she says.

Culler recalls visiting the cemetery about 15 years ago with her cousin, Vera Peoples Bailey.

"She wanted me to know our family history," Culler says. "Cousin Vera was very good about the history of the church and the cemetery, and I'm the only one who would listen to her. I would go with her. I was adventurous. It was all grown up, but I wasn't afraid to go. It was wonderful to see the monuments."

It's a crisp, clear morning in early January, and the three are at the St. Francis County Museum in the Rush-Gates Home in downtown Forrest City. The museum is filled with artifacts that tell the area's history, from a display dedicated to country singer Charlie Rich, who was born in nearby Colt, to a room filled with American Indian tools, pottery and arrowheads.

Bonner recalls attending funerals at the cemetery as a child.

Jordan says a friend told him about the cemetery four or five years ago: "She said that's where they played as kids. They played hide and seek and so forth in the cemetery."

Cemeteries help connect people to their past, he says. It's something he comes across often as president of the historical society.

"I've lost track of how many phone calls and emails I've gotten from people [across the country], and they'll say their great-great grandfather is buried in St. Francis County and ask if I could help find that grave."

Towns says once ownership of the land is sussed out, the historical society hopes to take stewardship of the cemetery and clean up the overgrowth.

"We'd like to make it look better than it does now. Not to make it into a tourist attraction or anything, but cemeteries need to be taken care of. It's important for historians and families."

Hope, of the Arkansas Historic Preservation Program, says she "would like to see the stories of the people buried there come out, and I would also like to see it get cleaned up. When I was there, I wished I had a rake. I'd like to see the markers get repaired and the leaf litter cleaned up so we can see what all is up there."

Ulrich admits the exact story of the cemetery might not be known, but that doesn't mean it and the stories of its inhabitants should be lost.

"We are certainly going to do our utmost to give the people buried there their dignity and recognition and due as our forebears."