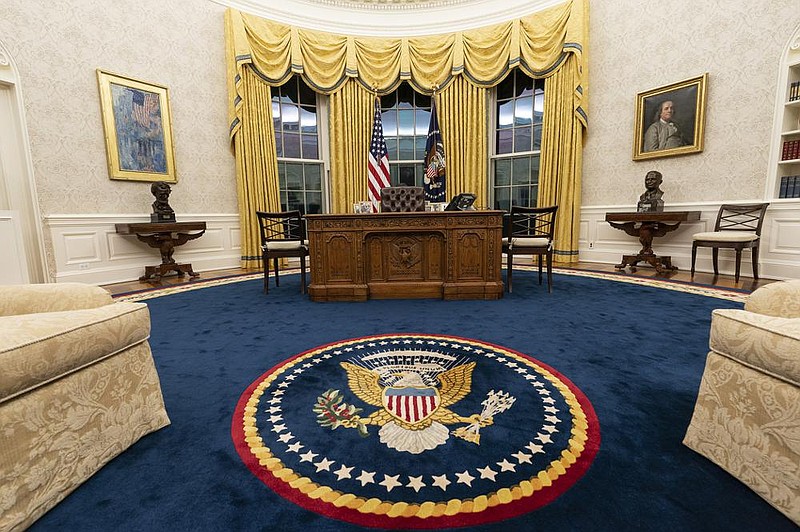 The Oval Office of the White House is newly redecorated for the first day of President Joe Biden's administration, Wednesday, Jan. 20, 2021, in Washington. (AP Photo/Alex Brandon)

WASHINGTON -- After 20 years in exile, President Bill Clinton's bold royal blue carpet is back in the Oval Office.

Staffers made the switch Wednesday so it would be ready for the White House's new occupant: Democrat Joe Biden.

"It brings back memories," he said.

With a West Wing office about 18 steps away from the Oval Office, he saw the carpet often, he said.

"I think it's a very nice compliment to Kaki and our state and to President Clinton, kind of a ... tipping of the hat by President Biden, so it made me feel good. It made me feel proud," McLarty said.

Many Arkansans are already familiar with the design: A replica is on display at the Clinton Presidential Library in Little Rock. (The library has been closed due to covid-19.)

The carpet, with a prominent presidential seal in the middle and a floral border, was crafted in Grand Rapids, Mich., and completed during Clinton's first year in office. Removed during the presidency of George W. Bush, it had been biding its time in a Riverdale, Md., warehouse, Hockersmith said.

She also designed the Oval Office draperies that are in use. Placed in storage by the Bushes, they were taken out of mothballs by the Trumps.

"I think our designs are timeless, really," she said.

Their influence was evident on the set of "The West Wing" and in the Oval Office featured in "The American President," a 1995 movie, Hockersmith said.

"They've become sort of iconic. Maybe that's because they exemplify the patriotic and energetic and positive spirit that we love about our country," she said.

In addition, Hockersmith is pleased with the art Biden has embraced.

"I love looking at the pictures that I've seen so far," she said.

In 1993, when Hockersmith helped the Clintons redecorate the White House, some critics second-guessed the Arkansans' choices.

Few were more biting than interior designer John MacMillan, who told the Chicago Tribune, "If bad taste were a treasonable offense, Hockersmith would be doing life in Leavenworth," the federal prison in Kansas.

"The room does seem to have more energy," she told the Dallas Morning News. "I think that's appropriate, because Clinton seems energetic."

For White House designers, criticism is "just part of the deal," Hockersmith said.

The Clinton-era styles, she added, have "stood the test of time."

After Clinton defeated President George H.W. Bush in 1992, Hockersmith was on hand to witness the White House handoff herself.

"We were allowed such gracious access by the Bushes. I was able to make several trips to the White House and go into the residence during the transition, including the trip that Hillary Clinton made to meet with Mrs. [Barbara] Bush," she said.

Such courtesies were not extended by the Trumps, she said.

"We had time and we had access, and the Bidens didn't have either of those, so I'm very impressed with what I can see, so far, that they were able to accomplish," she said.