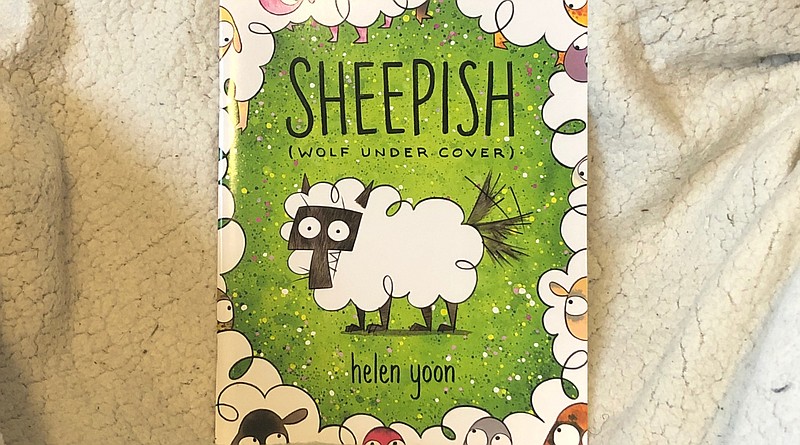 STORY: Wolf's hungry, and he's creeping up on lunch — sheep puttering in their field, running a vacuum cleaner, raising a flag, sweeping the grass ... Disguised inside a wad of cotton, Wolf sneaks in among them. But before he can pounce, one of them rings a dinner bell, and a sudden, massive flock sweeps him into an underground cafeteria.

Clutching a tray, he gets in line for the breakfast special, fried okra.

Wolf thinks the sheep don't suspect him, but they're ducking under tables and giving him the side eye.

He sets about his "master plan": to blend in so he can attack when it suits him. First, he helps wash the dishes, then he does laundry, chops firewood, bakes bread. He joins the woolly exercise class. He plays shuffleboard. He holds the book for the sheep bedtime story.

Just when he figures it's time to eat somebody, a lamb gives him a little kiss on the cheek.

Stricken by guilt, Wolf runs from the fold back to his sad den where he sets about trying to find a different diet. He reads books on pork and vegetarianism and, finally, veganism.

He's dozing off over the vegan book beside a fire when a knock at his door startles him. He opens to find a bunch of badly disguised little wolves. (It's the sheep.) They have missed him.

That's when Wolf realizes they knew who he was all along.

It might be a mistake to encourage the fantasy that predators will be pals with their prey, but ... sweet is sweet, and this is a darling story.