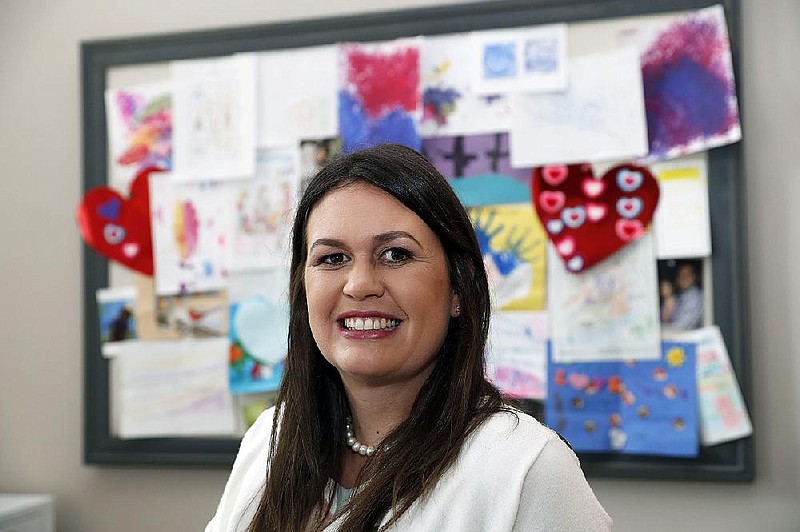 Sarah Huckabee Sanders, a former press secretary for then-President Donald Trump, on Monday launched her bid for governor in 2022 by vowing to defend Arkansas from the “radical left now in control of Washington,” as well as promote law and order, cut state income taxes and champion good schools and teachers.

She described herself as a Christian, wife, mom and proud Arkansan in a 7 1/2-minute video announcement released this morning.

Sanders, 38, of Little Rock, is the third Republican to announce a 2022 gubernatorial bid.

“I welcome Sarah Sanders to the race for governor,” Griffin said in a written statement.

[Video not showing up above? Click here to watch » https://www.youtube.com/watch?v=opbMn-n76AQ]

“I look forward to comparing our experience, track record and vision for the future of Arkansas,” said Griffin, who is a former 2nd District congressman and an aide to then-President George W. Bush.

Attorney General Leslie Rutledge of Maumelle announced in July 2020. No woman has been elected Arkansas governor.

Rutledge said Monday that “as our great State and Nation face threats to our liberties and freedoms from far-left national leaders, Arkansas must have a leader with a proven record of accomplishments against the liberal left.

"This race is about Arkansas's future and who has a proven record and not merely rhetoric in order to deliver the results we need to make Arkansas First in protecting our faith, families and freedoms,” she said in a written statement.

No Democrats have announced for the office.

Republican Gov. Asa Hutchinson, who has served since 2015, is limited to two four-year terms under the state’s term limits amendment. Hutchinson is Hendren’s uncle.

Sanders’ father is former Arkansas Gov. Mike Huckabee, who served from July 1996 until 2007. He also unsuccessfully ran for president in 2008 and 2016.

Her campaign intention had been widely expected. When Trump announced Sanders’ departure from the White House in June 2019 to return to Arkansas, he tweeted, “I hope she decides to run for Governor of Arkansas - she would be fantastic.”

A longtime political operative, she managed her father’s short-lived 2016 presidential campaign and then went to work for Trump as a senior adviser defending him on cable television programs and in other venues from February 2016 until his November 2016 victory over former U.S. Secretary of State and U.S. Sen. Hillary Clinton.

Sanders previously worked in leadership roles for campaigns for the U.S. Senate, governors and president.

She initially was principal deputy press secretary at the White House, but was promoted July 26, 2017, after the departure of her predecessor, Sean Spicer. She held the job for nearly two years and vigorously defended Trump’s policies.

In her video released today, Sander said, “America is great because we are free, but today our freedom and the rule of law are under attack.”

She said she was the first White House press secretary to require Secret Service protection because of a credible, violent threat against her.

“We’ve seen violence in our streets, at a congressional baseball practice and at our Capitol,” Sanders said. “This is not who we are as Americans. To remain free, we must have law and order and resolve our differences peacefully.

“The radical left’s solution is to impose government control and censorship from the top down, but their socialism and cancel culture will not heal America,” she said. “It will only further divide and destroy us.

“Everything we love about America is at stake and, with the radical left now in control of Washington, your governor is your last line of defense,” Sanders said. “In fact, your governor must be on the front line, so today I announce my candidacy for governor of Arkansas and ask for prayers and your support.”

Sanders said she would defend Arkansans’ right to be free of socialism and tyranny, to keep their 2nd Amendment rights and to have speech and religious liberty.

“Our state needs a leader with the courage to do what’s right, not what’s politically correct or convenient,” she said. “I took on the media, the radical left and their cancel culture, and I won. As governor, I will be your voice and never let them silence you.”

She said she was at the table with Trump confronting the nation’s most dangerous adversaries, such as China and North Korea, and winning on tax cuts, the border and judges.

Sanders said she will stand with law enforcement officers, promote law and order, and keep the state’s communities safe.

“I will prohibit sanctuary cities and cut off funding for cities that deliberately violate immigration laws,” Sanders said. “I will fight back against the radical environmental policies like the Green New Deal that threaten to destroy so many jobs. I will take on the bureaucracy, reduce the cost and size of government, and make it accountable to you.”

She said she wants to lower state income taxes to reward hard work, allow businesses to compete and prosper and create more jobs.

Sanders said she would offer more choices to parents of children in failing schools.

“Every child must have the opportunity of a quality education and no child should ever be trapped in a life of poverty and despair,” she said.

“Our goal shouldn’t be take assistance away from the working poor, but to offer the right education and job training opportunities to incentivize work and unleash hope for a better future,” Sanders said.

This story has been updated. It was originally published at 6 a.m.