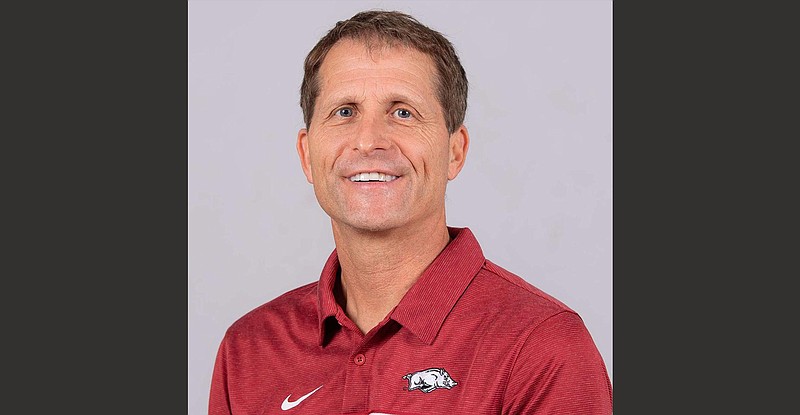 Razorbacks Coach Eric Musselman is shown in this file photo.

FAYETTEVILLE -- After the Arkansas Razorbacks shot a season-high 57.1% from the field in a 92-71 victory at Vanderbilt last Saturday, Commodores Coach Jerry Stackhouse ripped his team's defensive effort.

"That was just straight up like a game at the park," Stackhouse said of how easily the Razorbacks scored in hitting 36 of 63 shots with 48 points in the paint. "Where it's like, 'OK, I'm going to take my man.' "

Playing Ole Miss doesn't figure to feel like a pickup game in which defense is an afterthought when the University of Arkansas (12-4, 4-4 SEC) takes on the Rebels at 7:30 p.m. Wednesday in Walton Arena.

Ole Miss (8-6, 3-4) has played stifling defense most of the season, especially in winning its last two games at Mississippi State 64-46 and against Texas A&M 61-50.

It's the first time the Rebels held SEC opponents to 50 or fewer points in back-to-back games since the 1981-82 season when they beat Vanderbilt 51-48 and Mississippi State 47-33.

The Ole Miss-Vanderbilt game went four overtimes in an era before there was a shot clock or three-point shot.

Prior to last week, Ole Miss hadn't held back-to-back SEC opponents to 50 or fewer points in regulation games since the 1949-50 season when the Rebels beat Florida 54-46 and lost to Vanderbilt 44-37.

According to KenPom.com -- a college basketball analytics website -- going into Monday's games, Ole Miss ranked 13th nationally in defensive efficiency, holding opponents to an average of 90.5 points per 100 possessions.

"First of all, Coach [Kermit] Davis is a great coach," Arkansas Coach Eric Musselman said of his Ole Miss counterpart. "They control tempo. They pride themselves on the defensive side of the floor.

"They're going to mix up their defenses. We know that."

"I thought they did a great job pressuring us and being really physical with our ball-handlers," Mississippi State Coach Ben Howland said. "Basically what we saw was pressure, denial of everything, fight through every screen, really being in your face man-to-man.

"And then when they played their 2-3 zone, we did not attack it well. I thought their defense really bothered us."

The Rebels went to their 2-3 zone midway through the first half and frustrated the Bulldogs in taking a 29-21 halftime lead.

"Us going to the zone defense is going to help us," Ole Miss senior guard Devontae Shuler said after the game. "It's going to keep us more compacted. I think us using that 2-3 zone is going to really help us in the long run."

Davis said it was the best the Rebels have played their 1-3-1 zone this season.

"Our 1-3-1 defense was terrific," Davis said. "It kind of kept them off balance.

"We've had some good moments, but for about 25 minutes, that's the best we've been. We just had active hands."

"We went back and watched that game and they went with their 1-3-1 late in the game and we got two really good looks from three-point land," Musselman said of baskets by Isaiah Joe -- now in the NBA with Philadelphia -- in a 29-second span that helped Arkansas rally from a 64-56 deficit. "They seem to be a little more aggressive in their 1-3-1 this year, which also morphs back into a 2-3 zone."

[Video not showing up above? Click here to watch » https://www.youtube.com/watch?v=yxFS7mqtXiM]

The Rebels are 7-0 this season when holding opponents under 40% shooting and are yielding an average of 61.6 points per game

"I think just for us, it's the same thing it is most nights," Musselman said of executing on offense against Ole Miss. "Really, really take care of the basketball, understand what their themes are in the game."

A primary theme for Ole Miss is forcing turnovers -- 17.3 on average to rank 19th nationally. The Rebels are the only team with two players among the top five in steals in the SEC with Shuler second (1.9 per game) and Luis Rodriguez fifth (1.7).

"Certainly we have a 1-3-1 attack that we used last year," Musselman said game-planning for the Ole Miss defense. "But we did spend most of [Monday's practice] with some alterations or some slight variations to that offense as well. So I think that we know they run that anywhere from two to 15 to 17 times a game.

"When the ball gets in certain spots on the floor they fall back into a 2-3 or potentially in man, and they do that after some made baskets.

"But at the end of the day you're going to have to go out and play and make plays and not turn the ball over and get high-quality shots."