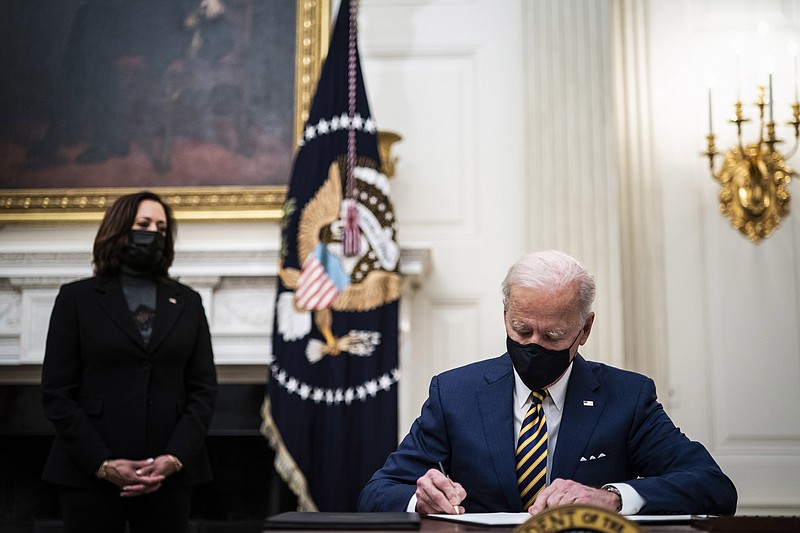 WASHINGTON -- President Joe Biden on Monday signed an order aimed at forcing the federal government to buy more goods produced in the United States, a key part of his campaign pledge to revive domestic manufacturing.

Standing in front of a blue backdrop reading "The Future Will Be Made in America," the president said he was directing regulators to tighten the definition of American-made products and creating a new position in the Office of Management and Budget to oversee purchases of domestic goods.

The president's order also will make it harder for federal agencies to issue waivers allowing the government to purchase some products made overseas. Under the new rules, agency officials will be required to justify such choices to the White House.

[Video not showing up above? Click here to watch » https://www.youtube.com/watch?v=Ews-XdSaX8s]

Biden acknowledged that efforts to promote domestic content have been a familiar part of previous presidents' agendas. President Donald Trump issued new regulations increasing the share of a product's components that must be produced domestically to qualify as made-in-the-USA one day before he left office.

"This is different and not the same," Biden insisted.

The executive order will create a website where American businesses can see what contracts are being awarded to foreign vendors, allowing them to alert the government to the availability of a domestic alternative, Biden said.

The order reflects the shifting consensus in American politics away from free trade and toward direct government intervention to promote U.S. manufacturers, a position Trump embraced. The pandemic has intensified calls for the United States to shore up its domestic manufacturing capabilities, given gaps last year in the medical supply chain that left U.S. medical workers scrambling for personal protective equipment.

"We're going to make sure that they buy American and are made in America," Biden said Friday.

The measure drew labor union plaudits, with AFL-CIO President Richard Trumka calling it "a good first step in revitalizing U.S. manufacturing." But the U.S. Chamber of Commerce said the initiative probably would not bring home lost manufacturing jobs and would boost the cost of government projects.

Turning Biden's aspirations for reviving domestic manufacturing into reality may be difficult. Trump's top trade adviser, Peter Navarro, pushed aggressively for similar provisions but was often rebuffed by other officials who argued that his proposals risked backlash from foreign nations as well as higher costs for U.S. taxpayers.

Trump's last-minute regulations, which take effect Feb. 22, give American companies the edge over foreign rivals even if their products cost 20% to 30% more.

The administration is determined to move beyond the traditional single-minded focus on price and efficiency in its approach to trade policy.

"As we sort out what globalization is going to look like in the future, we're headed toward a more thoughtful policy," said one trade specialist advising the administration, who spoke on the condition of anonymity because the person was not authorized to speak to the press.

The federal government spends as much as $600 billion annually on contracts, but a meaningful portion of that money goes to foreign businesses, said Lori Wallach, a trade expert at Public Citizen, a nonprofit watchdog organization.

It is unclear how much federal contracting money goes abroad, Wallach said. The U.S. Chamber of Commerce says 97% of federal procurement funds go to "U.S. firms." But that figure includes the foreign subsidiaries of American corporations, meaning the purchases could support workers in Vietnamese or Mexican factories rather than Americans.

Under a World Trade Organization accord on government procurement, the U.S. generally has been more receptive to foreign firms bidding on contracts than other countries have.

In 2010, the most recent year such data is available, the U.S. opened $837 billion in government contract competitions to foreign firms, more than twice the combined figure of the next five governments -- the European Union, Japan, South Korea, Norway and Canada, according to the Government Accountability Office.

The U.S. that year allowed foreign companies to bid on about 48% of its $1.7 trillion government procurement market while those five governments put out to bid 16% of their combined $2.4 trillion market.

"This is going to be a long-term play, not a short-term play," said Reinsch, a Commerce Department official in the Clinton administration.