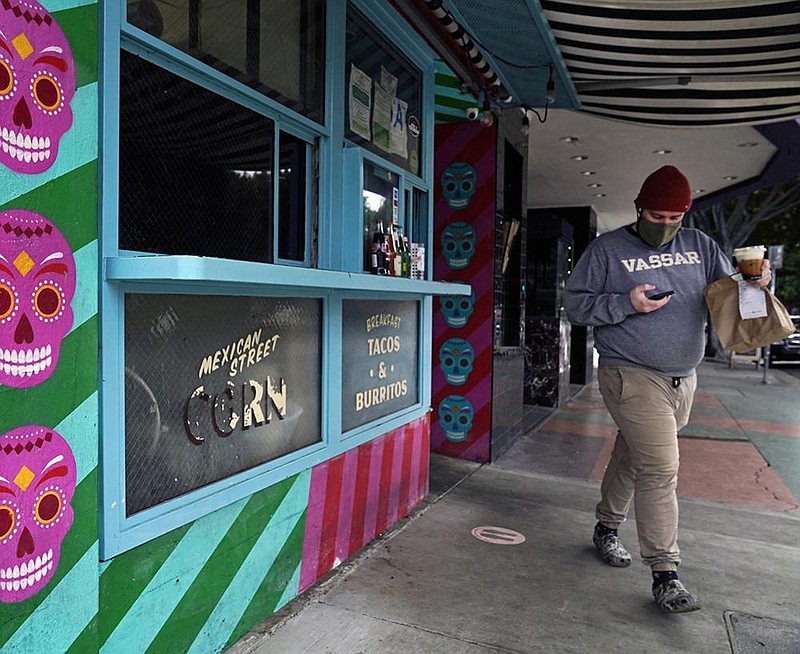 A person picks up food Monday at a restaurant in Los Angeles. Cali- fornia has lifted regional stay-at-home orders in response to a drop in covid-19 cases and hospitalizations. More photos at arkansa- sonline.com/126psaki/. (AP/Damian Dovarganes)

WASHINGTON -- President Joe Biden on Monday added travelers from South Africa to the list of those barred from entering the United States, the latest step in an effort to contain the spread of the coronavirus and fast-moving variants that have surfaced in that country and others in recent weeks.

The move also extends a ban on travelers from Brazil as well as the United Kingdom, Ireland and 26 other European countries that had been set to expire today under a proclamation signed by then-President Donald Trump shortly before he left office.

"With the pandemic worsening and more contagious variants spreading, this isn't the time to be lifting restrictions on international travel," White House spokeswoman Jen Psaki said during a Monday news conference. She said the move was part of the administration's "science-driven response" to the virus.

The restrictions on travelers from South Africa are set to take effect Saturday.

Dr. Anthony Fauci, the U.S.' top infectious disease expert, called Biden's move "prudent" in a round of television interviews Monday. On "CBS This Morning," he said that extending the ban and including South Africa "clearly will be helpful."

"We have concern about the mutation that's in South Africa," Fauci said. "We're looking at it very actively. It is clearly different and more ominous than the one in the U.K."

Fauci warned that more mutations are possible and said scientists are preparing to adapt the vaccines if necessary.

"We really need to make sure that we begin, and we already have, to prepare if it's necessary to upgrade the vaccines," Fauci said. "We're already taking steps in that direction despite the fact that the vaccines we have now do work."

While some have questioned the value of travel bans, Fauci said one important difference this time is that the ban dovetails with a requirement that all international travelers to the U.S. show proof of a negative coronavirus test.

Earlier this month, the Centers for Disease Control and Prevention warned that the variant first seen in the United Kingdom would become the dominant strain in the U.S. within about two months. It has been found in at least 20 states. The South African variant, however, has not yet been identified in the U.S.

Fauci said there is "a very slight, modest diminution" of effectiveness against those variants but that "there's enough cushion with the vaccines that we have that we still consider them to be effective" against both.

In addition, a variant from Brazil was detected for the first time in the U.S. in a Minnesota resident who recently traveled there, state health officials said Monday.

The Biden administration is also taking steps to require travelers to quarantine after their arrival in the United States and to be tested a second time. Details on how those measures will be implemented are expected soon.

Under the ban, most noncitizens who have been in those countries in the past 14 days are barred from entering the United States. However, some exceptions are in place.

The extension comes as the new testing requirement for international travelers is set to take effect today.

Under the requirement announced earlier this month by the CDC, all international travelers to the U.S. will be required to show proof of a negative coronavirus test before boarding a flight. Polymerase chain reaction tests and antigen tests will be acceptable.

Those who refuse will not be allowed to fly. Travelers must be tested within three days before boarding their flights, and airlines will be required to review travelers' documentation.

Biden also has directed officials to explore the feasibility of requiring international travelers to quarantine or self-isolate once they arrive in the U.S.

The extension of the travel restrictions is a blow to airlines that had hoped testing could replace bans and quarantines. Industry surveys have shown that people are more reluctant to travel if they must quarantine.

Biden has acted quickly to impose rules intended to reduce the spread of the virus as the administration seeks to ramp up efforts to vaccinate as many people as possible.

Last week, he signed an order mandating masks in airports and on many planes, trains, ships and intercity buses. The order followed one the president signed Wednesday requiring that people wear masks on federal property.

The European Union's executive body proposed Monday that the bloc's 27 nations impose more travel restrictions to counter the spread of new variants while making sure to keep goods and workers moving across EU borders.

Amid concerns related to the production and delivery of vaccines, the European Commission urged EU nations to reinforce testing and quarantine measures for travelers as virus mutations that are more transmissible threaten to overwhelm European hospitals with new cases.

More than 400,000 EU citizens have already died from the virus.

"The start of the EU vaccination campaign kicked off the beginning of the end of the pandemic," EU Justice commissioner Didier Reynders said. "At the same time, new, more transmissible variants of the virus have surfaced. There is currently a very high number of new infections across many member states. And there is an urgent need to reduce the risk of travel-related infections to lessen the burden on overstretched health care systems."

Among the new measures, which need to be approved by EU nations before taking effect, is the addition of a "dark red" to the EU's weekly map of infections.

Reynders said the new color highlights areas where the rate of newly confirmed infections in the past 14 days is 500 or more per 100,000 inhabitants. He said between 10 and 20 EU countries would already see that color on all or part of their territory if it were in effect now.

"We also think it is necessary for essential travelers arriving from dark-red areas to get tested before traveling and to undergo quarantine, unless these measures would have a disproportionate impact on the exercise of their essential function," Reynders said.

Deaths and cases per day in the U.S. have dropped markedly over the past couple of weeks but are still running at high levels, and the effort to snuff out covid-19 is becoming an ever more urgent race between the vaccine and the mutating virus.

Fauci said the improvement in numbers across the country appears to reflect a "natural peaking and then plateauing" after a holiday surge, rather than the arrival of the vaccine in mid-December.

States that have been hot spots in recent weeks, such as California and Arizona, have shown similar improvements during the same period.

Ali Mokdad, a professor of health metrics sciences at the University of Washington, said a predicted holiday surge was reduced by people traveling less than expected, and an increase in mask-wearing in response to spikes in infections has since helped bring the numbers down.

Caitlin Rivers, an epidemiologist at the Johns Hopkins Center for Health Security, said too few people have been vaccinated for that to have had a significant effect on virus trends. She said she can't predict how long it will take for the vaccines' effects to be reflected in the numbers.

Rivers said she is concerned that the more contagious variants could lead to a deadly resurgence later this year.

"I think we were on track to have a good -- or a better, at least -- spring and summer, and I'm worried that the variants might be throwing us a curveball," she said.

Nationwide, about 18.5 million people, or less than 6% of the U.S. population, have received at least one dose of vaccine, including about 3 million who have gotten the second shot, according to the CDC.

Only slightly more than half of the 41 million doses distributed to the states by the federal government have been injected into arms, according to the CDC's count.

The vaccine rollout in the U.S. has been marked by disarray and confusion, with states complaining in recent days about shortages and inadequate deliveries that have forced them to cancel mass vaccination events and tens of thousands of appointments.

The virus has killed almost 421,000 Americans and infected more than 25 million, with a widely cited University of Washington model projecting the death toll will reach about 569,000 by May 1.

Although Moderna said its vaccine is effective against the variants that have emerged in Britain and South Africa, it appears to be less protective against the African variant, and the company is developing a new form that could be used as a booster shot.

"We're doing it today to be ahead of the curve should we need to," said Dr. Tal Zaks, Moderna's chief medical officer. "I think of it as an insurance policy."

Moderna reported findings from a study that used blood samples from eight people who had received two doses of the vaccine and two monkeys that had also been immunized.

The British variant had no effect on the levels of neutralizing antibodies -- the type that can disable the virus -- produced after vaccination. But with the South African form, there was a sixfold reduction in those levels.

Even so, the company said, those antibodies "remain above levels that are expected to be protective."

[Video not showing up above? Click here to watch » https://www.youtube.com/watch?v=w4XHvi9N7ck]

The company's action is part of a race to control a shape-shifting virus that has already created global havoc and now threatens to mutate in ways that will make it even harder to fight.

The mutations worry scientists. The form first detected in Britain is about twice as contagious as the virus identified in China a year ago, and researchers have begun to suspect that it may also be more deadly.

Also on Monday, Merck announced that it was abandoning a pair of vaccine candidates in clinical trials.

The news came as a disappointment at a time when the United States and other countries are struggling to accelerate their sluggish vaccination campaigns.

The two projects are the second and third vaccine candidates to be abandoned in clinical trials. The University of Queensland in Australia abandoned its effort in December. The French pharmaceutical company Sanofi and other vaccine-makers have paused some projects after getting disappointing initial results but are now regrouping to move forward.

Merck will now focus its efforts on an experimental antiviral drug known as molnupiravir. Designed for influenza, it has shown promising effects in studies on animals and in early clinical trials. The trial is set to finish by May, although preliminary results could come out as early as March.

​​​​​Information for this article was contributed by Lori Aratani of The Washington Post; by Aamer Madhani, Zeke Miller, Samuel Petrequin, Jonathan Drew, Michael Kunzelman and staff members of The Associated Press; and by Denise Grady and Carl Zimmer of The New York Times.