Sanders casts bid for governor as defense of state 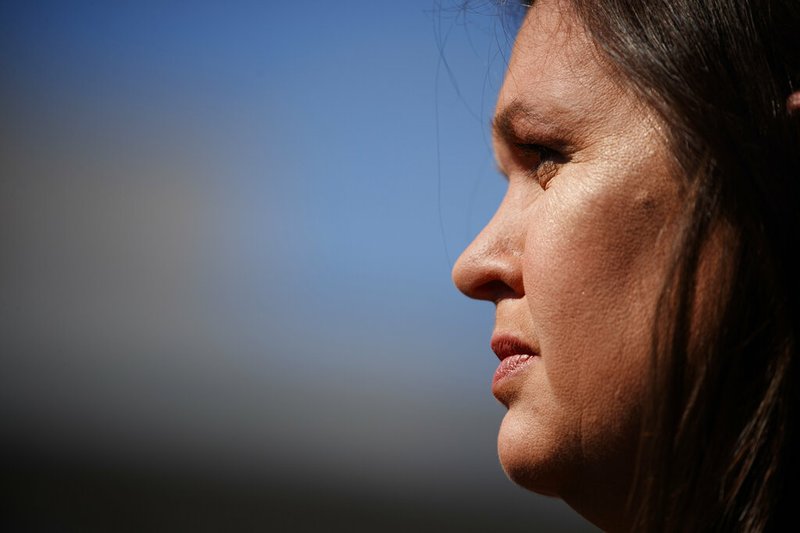 Sarah Huckabee Sanders, a former press secretary in the Trump administration, on Monday launched her bid for governor by vowing to defend Arkansas from the "radical left now in control of Washington" and to promote law and order, cut state income taxes and champion good schools and teachers.

She described herself as a Christian, wife, mom and proud Arkansan in a 7½-minute video announcement released Monday morning.

"Everything we love about America is at stake and, with the radical left now in control of Washington, your governor is your last line of defense," Sanders said. "In fact, your governor must be on the front line, so today I announce my candidacy for governor of Arkansas and ask for prayers and your support."

Sanders, 38, of Little Rock is the third Republican to announce a 2022 gubernatorial bid.

Sen. Jim Hendren, R-Sulphur Springs, said Monday that he expects to make a decision about whether to run for governor soon.

Republican Gov. Asa Hutchinson, who has served since 2015, is limited to two four-year terms under the state's term-limits amendment. Hutchinson is Hendren's uncle.

"In regard to the 2022 governor's race, at this time I do not intend to endorse anyone in the primary campaign," Hutchinson said in a written statement. "I am a voter, so I will follow the campaign with interest, but I have a job to do for the next two years, and I will devote my energies to bring Arkansas out of the pandemic and to revitalize our economy."

No Democratic candidates have announced bids for governor in 2022.

Her campaign intention had been widely expected. When then-President Donald Trump announced Sanders' departure from the White House in June 2019 to return to Arkansas, he tweeted, "I hope she decides to run for Governor of Arkansas -- she would be fantastic."

Trump endorsed Sanders on Monday, saying she is a "warrior who will always fight for the people of Arkansas and do what is right, not what is politically correct."

A longtime political operative, Sanders went to work for Trump as a senior adviser defending him on cable television programs and in other venues from February 2016 until his November 2016 victory over former U.S. Secretary of State and U.S. Sen. Hillary Clinton, who is a former Arkansas first lady.

Among other roles, Sanders previously worked for the campaigns of U.S. Sen. John Boozman in 2010 and U.S. Sen. Tom Cotton in 2014 and for her father's presidential campaigns.

She initially was principal deputy press secretary at the White House but was promoted July 26, 2017, after the departure of her predecessor, Sean Spicer. She held the job for nearly two years and vigorously defended Trump's policies.

In her campaign video, she said she would defend Arkansans' right to be free of socialism and tyranny, to keep their Second Amendment rights and to have speech and religious liberty.

"Our state needs a leader with the courage to do what's right, not what's politically correct or convenient," she said. "I took on the media, the radical left and their cancel culture, and I won. As governor, I will be your voice and never let them silence you."

Sanders said she will stand with law enforcement officers, promote law and order, and keep the state's communities safe.

"I will prohibit sanctuary cities and cut off funding for cities that deliberately violate immigration laws," she said. "I will fight back against the radical environmental policies like the Green New Deal that threaten to destroy so many jobs. I will take on the bureaucracy, reduce the cost and size of government, and make it accountable to you."

She said she would offer more choices to parents of children in failing schools.

"Every child must have the opportunity of a quality education, and no child should ever be trapped in a life of poverty and despair," she said.

"Our goal shouldn't be to take assistance away from the working poor, but to offer the right education and job training opportunities to incentivize work and unleash hope for a better future," Sanders said.

As Trump's press secretary, Sanders was sharply critical of media coverage of the Trump administration and frequently clashed with news personalities from CNN, among other outlets.

She branded stories she disagreed with as "fake news" but fended off questions about whether she considered the media to be "the enemy of the people." A June 2018 Gallup Poll showed a sharp partisan divide when it came to Sanders, with 79% of Republicans viewing her favorably, but only 14% of Democrats having a favorable view.

As deputy press secretary, Sanders defended the firing of FBI Director James Comey, telling the press that "the rank and file of the FBI had lost confidence in their director" prior to his removal.

Later, when a reporter indicated that the "vast majority" of FBI agents favored Comey, Sanders disputed that during a televised news conference, saying "Look, we've heard from countless members of the FBI that say very different things."

Eventually quizzed by then-special counsel Robert Mueller's investigators about her statements, Sanders said the reference to "countless numbers" was a "slip of the tongue," the Mueller report stated.

"She also recalled that her statement in a separate press interview that rank-and-file FBI agents had lost confidence in Comey was a comment she made 'in the heat of the moment' that was not founded on anything," the report stated.

Former Gov. Huckabee said Monday that he and his wife, Janet, are thrilled that their daughter has taken this step and look forward to campaigning with her, "but mostly we look forward to increased opportunities to babysit grandkids!"

"She faces a formidable primary field, but she is up for the challenge and her desire to serve and lead is something we're proud of," he said in a written statement. "She's smart, compassionate and fearless to stand for her convictions."

"We all value Sarah Sanders' political work in Washington and appreciate her," Griffin said in a written statement. "I welcome her to the race for governor, and am glad that she's back in Little Rock."

But Griffin said that "her pledge to ban sanctuary cities would have been a great line in a speech in 2019, but not in 2021."

"It sounds like she needs to catch up on what's been going on in Arkansas," he said.

Act 1076 of 2019 allows the state to withhold funding from any cities, towns and counties that enact "sanctuary" policies that protect people in the country illegally.

Through the end of December, Griffin reported raising more than $1.8 million in contributions for his gubernatorial campaign since March 3, 2020, and accumulating a campaign treasury totaling more than $1.7 million. So far, he has been endorsed by Republican U.S. Reps. Rick Crawford of Jonesboro and Bruce Westerman of Hot Springs.

Rutledge said Monday that Sanders and her family have been good friends for a long time and will continue to be after this election.

"As our great state and nation face threats to our liberties and freedoms from far-left national leaders, Arkansas must have a leader with a proven record of accomplishments against the liberal left," she said in a written statement. "This race is about Arkansas's future and who has a proven record and not merely rhetoric in order to deliver the results we need to make Arkansas First in protecting our faith, families and freedoms."

Through the end of December, Rutledge reported raising more than $1 million for her gubernatorial campaign in the past two quarters and accumulating a campaign treasury of more than $900,000.

He said Arkansas deserves candidates who talk about investing in every community across the state and who understand that arguing about Washington politics doesn't put food on the table, but jobs and economic opportunity do.

"A competitive race against the worst of Arkansas will not happen just because we wish it so," Gray said in a written statement. "It will take aggressive organizing and collaboration among many groups across the state so that Arkansas can be that better place we know it is. The Democratic Party of Arkansas and its candidates look forward to the challenge."