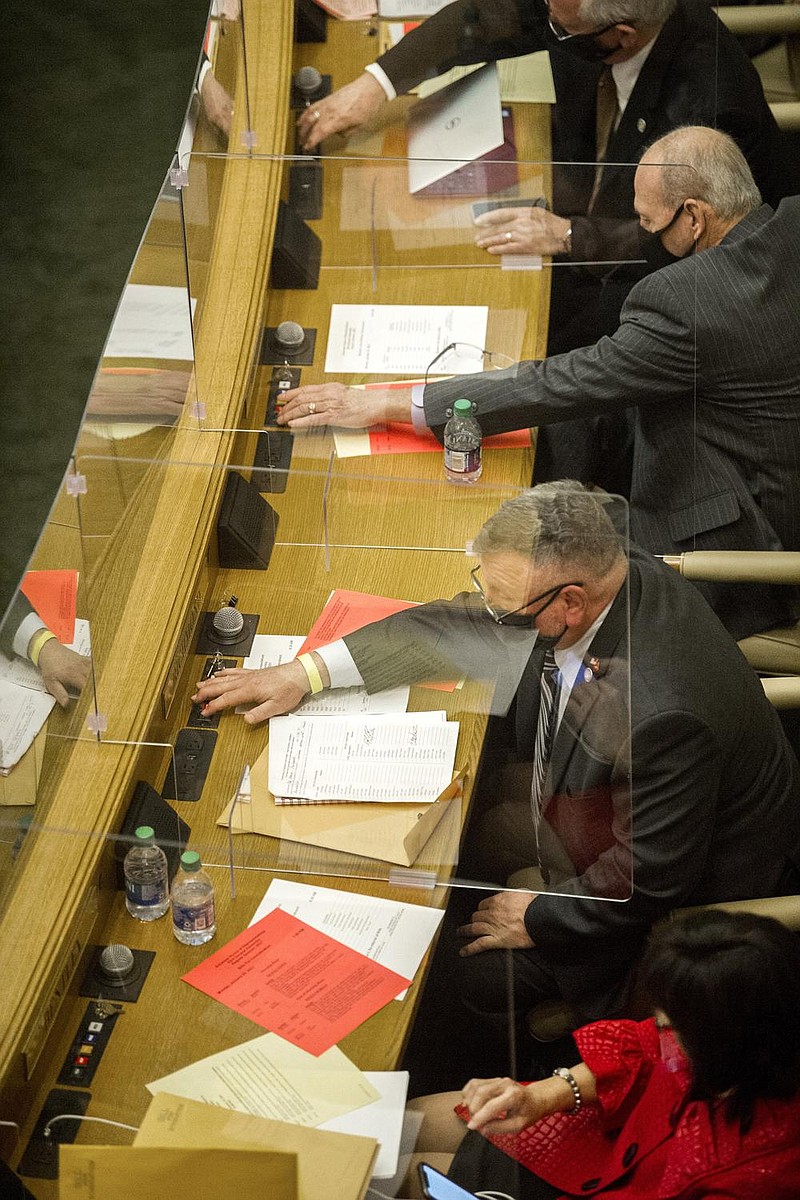 Members of the Arkansas House of Representatives cast their votes for House Bill 1025, which amended the law concerning the training of coroners and declared an emergency clause allowing them an extension on the time needed to complete their training, on Monday, Jan. 25, 2021. The bill passed 95-0. (Arkansas Democrat-Gazette/Stephen Swofford)

“Today with the small appropriation, we can start taking major steps on holding the executive branch accountable for the months and months of ignoring us, and putting us on the sideline,” Garner said.

The appropriation would fund 10 liaisons in the governor’s office, who are unpaid except for per diem during the legislative session.

The governor has come under scrutiny by some members of his party for his actions during the covid-19 pandemic, including ordering a statewide mask mandate.

The sponsor, Sen. Jonathan Dismang, R-Beebe, moved to have the bill placed on the calender again today for reconsideration.

“That will be a decision for the governor’s office to communicate with those members who voted no,” Dismang said.

In a statement released through a spokeswoman, Gov. Asa Hutchinson said he was not “aware of any concern” regarding the bill.

“As the session progresses, I am confident this issue can be resolved,” Hutchinson said.

Sample-ballots idea gets nod from panel

Legislation that would require every county in Arkansas to post sample ballots on the secretary of state’s website before each election was endorsed by the House State Agencies and Governmental Affairs Committee on Monday.

House Bill 1202, by state Rep. Andrew Collins, D-Little Rock, would require counties to submit samples of every ballot style to the secretary of state at least 20 days before primary and general elections, and 10 days before other elections. Collins said all 75 counties are required to place sample ballots on the doors of the county courthouse before an election, but only 55 counties post sample ballots online as well.

Representatives from the secretary of state’s office told the committee Monday that they approved of the legislation, after some members questioned whether the requirement was feasible for all counties.

The bill was backed by a voice vote with at least one member voicing dissent and now goes to the House.

A bill that would allow retired members of the Arkansas Public Employees Retirement System to temporarily work for legislative agencies without a 180-day separation period from employment zipped through the Legislative Joint Committee on Public Retirement and Social Security Programs.

Under SB162, the 180-day separation period would not apply to members who return to temporary employment with the state House of Representatives, state Senate, Bureau of Legislative Research, Arkansas Legislative Audit or the Arkansas Code Revision Commission during a regular session, fiscal session or a special session for a position requiring specialized institutional knowledge and experience.

“We are in desperate need of session employees” amid covid-19, Sample told the legislative committee. “We need some people in the Senate, bureau and Legislative Audit,” he said. “We need people that can do a lot of specialized things.”

The Senate approved legislation Monday that would allow the state to pull the license of a massage therapist after a prostitution offense.

Senate Bill 87, by state Sen. Bart Hester, R-Cave Springs, would add prostitution to the list of offenses that can cause a therapist to lose his or her license. State law prohibits anyone convicted of prostitution from receiving a license for massage therapy.

The bill passed 27-3, with several Democrats questioning whether a lifetime ban was appropriate for someone who is attempting to overcome a past conviction. The bill now heads to the House for consideration.

The Senate voted Monday on a bill that would require the state’s Suicide Prevention Hotline to employ workers who are veterans or are experienced working with veterans.

State Sen. Trent Garner, R-El Dorado, said the legislation is a response to the 1,077 calls to the suicide hotline from veterans in the past three years.

The Senate passed Garner’s legislation, Senate Bill 27, 33-0 with one member voting present. The bill now heads to the House.

The Senate Education Committee on Monday supported a pair of bills that would make adjustment to the state’s lottery-funded scholarship programs.

Senate Bill 131 would change the eligibility requirement for the Arkansas Concurrent Challenge Scholarship Program from a minimum letter grade of C or the equivalent to a 2.5 GPA.

House Bill 1056, which would amend the state open meetings law to allow city and county governments to hold virtual meetings during a state of emergency, passed the Arkansas General Assembly’s lower chamber on Monday.

The vote was 91-1, with four voting present.

Lawmakers passed temporary legislation allowing cities and counties to do so during a special session on coronavirus measures last year, but it expired Dec. 31.

Many local governments are already holding virtual or quasi-virtual meetings, but state law is ambiguous on whether that’s allowed, legal counsel for the Association of Arkansas Counties said at a committee meeting last week.

Justin Gonzales, R-Okolona, was the only House member to vote against the bill. During the meeting of the House Committee on State Agencies and Governmental Affairs last week, he said he was concerned about the public’s ability to give input during virtual meetings.

A bill passed by the House on Monday would require counties to provide proof of payroll tax payment and retirement system contributions.

Jacob Kade Holliday, the former Craighead County clerk, is suspected of transferring more than $1.5 million from the county’s payroll holding account into his personal account. He was arrested in June and has been indicted on federal charges.

“I think we need to pass this bill just to help protect the county employees, their taxes that they’re paying in for their retirement,” Tosh said. “It was very devastating what hit us there in that county and hopefully this will prevent that from occurring in the future.”

The Jonesboro lawmaker also said that upon consulting with the Association of Arkansas Counties, he found that many counties are already practicing some version of what he wants to put into law.

Legislation that would give coroners more time to complete their required training, citing the difficulties brought on by the covid-19 pandemic, cleared the House on Monday.

House Bill 1025 states that a person employed as a deputy coroner after Jan. 1, 2021, shall complete the state-required training within one year of beginning employment.

Coroners “have devoted an extraordinary amount of time and effort to prepare and respond to the pandemic,” which has also resulted in training being canceled, according to the bill’s emergency clause.

The House passed eight appropriations bills for the 2021-22 fiscal year on Monday.

There are no funding changes from the previous year included in the bills, Rep. Lane Jean, R-Magnolia, said. Jean is co-chairman of the Joint Budget Committee.

House Bill 1075: $2 million to Corn and Grain Sorghum Promotion Board.

The vote on all the bills was 91-0 with two voting present.

The calendar of public events of the 93rd General Assembly for today, the 16th day of the 2021 regular session.

MAC refers to the Multi-Agency Complex west of the state Capitol. OSC is the Old Supreme Court Chamber. The legislative calendar is at: https://www.arkleg.state.ar.us