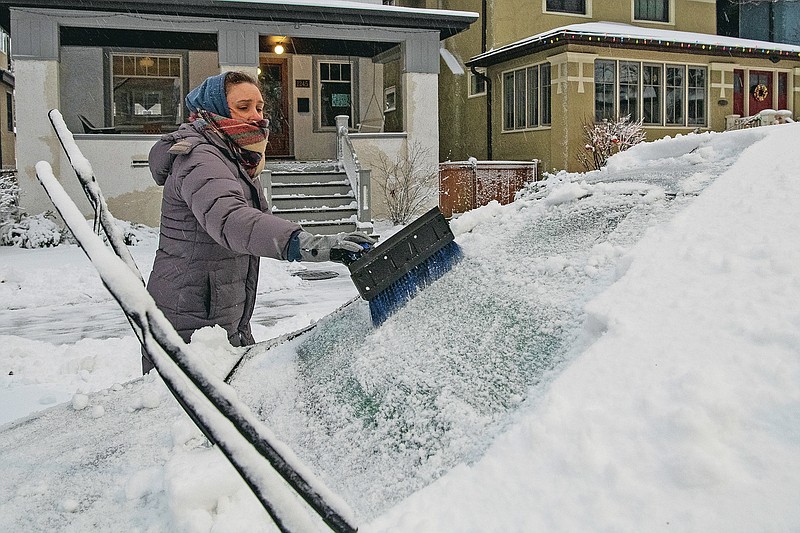 Sarah Lee clears snow off her vehicle in the Edgewater neighborhood, after a snowstorm in Chicago, Tuesday, Jan. 26, 2021. In the Chicago area, between between 3 inches (7.6 centimeters) and 5 inches (12.7 centimeters) of snow had fallen by early Tuesday. (Tyler LaRiviere /Chicago Sun-Times via AP)

OMAHA, Neb. -- A major winter storm dumped more than a foot of snow on parts of the middle of the country while another system blanketed parts of the Southwest with snow, disrupting travel for a second consecutive day Tuesday and shuttering many schools.

There were closures of several coronavirus testing sites on Monday and Tuesday in Nebraska and Iowa, and both states saw 12 to 15 inches of snow in places. At least 4 inches of snow was expected through Tuesday across most of an area stretching from central Kansas northeast to Chicago and southern Michigan.

National Weather Service meteorologist Taylor Nicolaisen, who is based near Omaha, Neb., said up to 15 inches was reported in spots between York, Neb., and Des Moines, Iowa. He said it's uncommon for the region to get more than a foot of snow from a single storm, and it has been decades since some cities saw this much.

The storm made travel treacherous in places as wind-whipped snow piled up. Interstates were temporarily closed in western Nebraska and in Wisconsin near Milwaukee because of crashes Tuesday morning, and scores of flights were canceled at airports across the region. Officials urged drivers to stay off the roads.

In Wisconsin, the weather service predicted up to 10 inches of snow could fall in the Milwaukee area, with the highest totals along Lake Michigan.

"It's not only snow but it's pretty darn windy out there, so that's causing a lot blowing and drifting," he said.

In the Chicago area, between between 3 inches and 5 inches of snow had fallen by early Tuesday. Meteorologist Bett Borchardt forecast snowfall up to 8 inches or more in northern Illinois before the storm ends Tuesday evening.

The last comparable snowfall hit the area in November 2018, when 8.4 inches fell.

Many schools and businesses across the Midwest closed for a second day Tuesday as crews worked to dig out after the storm.

Omaha had all 115 of its own plows and 300 contractors out Tuesday working around the clock to clear the streets in Nebraska's biggest city, but Assistant Public Works Director Todd Pfitzer cautioned the effort will take some time to complete. And the forecast calls for Omaha and much of eastern Nebraska to get another inch or so of snow Tuesday night.

"We are asking for a little patience. We got 12 inches of snow yesterday," Pfitzer said.

In West Des Moines, Iowa, Chris Borsberry said he needed four-wheel drive to make it into the Fairfield Inn & Suites where he works, and it still took him twice as long as normal to get to the hotel. Once there, Borsberry said he had to shovel the sidewalk seven times because it kept getting covered until the snow finally stopped.

"I got excited about that because it meant I only had one more shovel pass to do," said Borsberry, 45.

In York, Neb., roughly 250 semitrailers waited out the storm at the Petro truck stop alongside Interstate 80. Manager Rachael Adamson said she could see knee-high drifts.

"We haven't had this much snow in quite a few years," Adamson said.

In the South, one person was dead and at least 30 others were injured after a tornado carved a path of destruction north of Birmingham, Ala., on Monday night, leaving the area with crumpled buildings and downed trees.

In the Southwest, more than a foot of snow fell in the mountains of Southern California, Nevada and Arizona. Icy conditions in mountains north of Los Angeles shut Interstate 5 in Tejon Pass and State Route 58 in Tehachapi Pass.

A storm buried northern Arizona in snow while sending flurries to the outskirts of Las Vegas and Phoenix. Most of Nevada was bracing for another series of powerful winter storms that could bring several feet of snow to the mountains above Lake Tahoe by Thursday.

Preliminary snowfall reports from the latest storm included 14.2 inches at the Flagstaff airport and 16 inches at Payson between Sunday night and late Monday, the weather service said.

Another major storm was approaching the coast with the potential to bring 7 to 10 inches of rain to central California and dump several feet of snow across the Sierra Nevada mountains. That additional rain and snow could lead to flash floods and debris flows -- which can carry massive boulders, trees and other objects -- to areas north and south of San Francisco Bay. Evacuation orders were in effect for areas of fire-scarred Santa Cruz County and evacuation warnings were issued in San Mateo County. 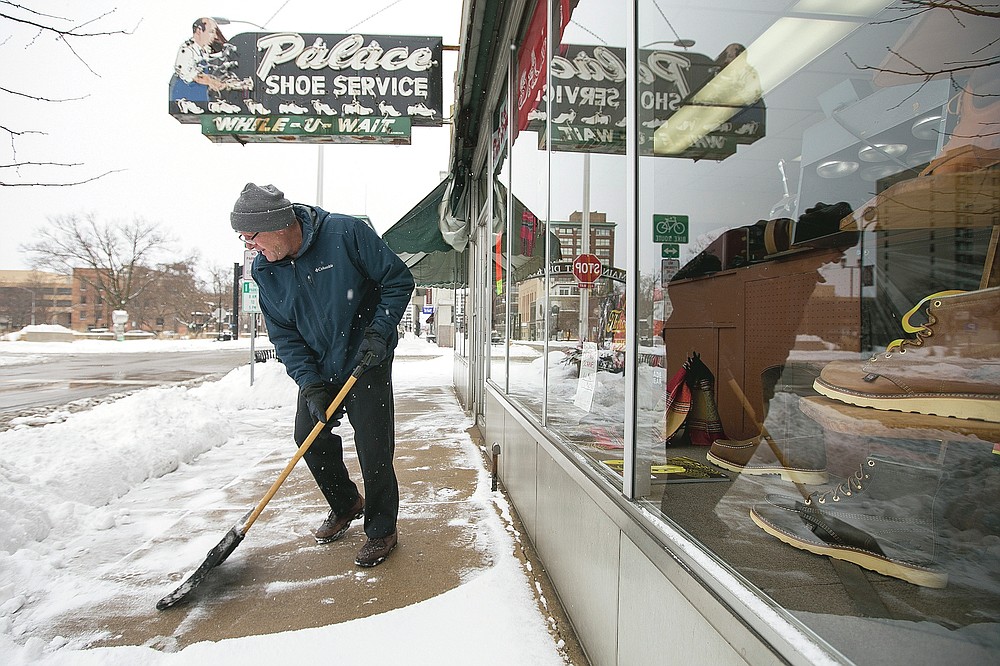 Tom Giamalva, owner of Palace Show Services, clears away snow from the sidewalk in front of his business on North Main Street on Tuesday, Jan. 26, 2021, after a snowstorm in Rockford, Ill. Many schools and businesses closed as the storm moved across the Midwest and officials urged drivers to stay off the roads. (Scott P. Yates/Rockford Register Star via AP) 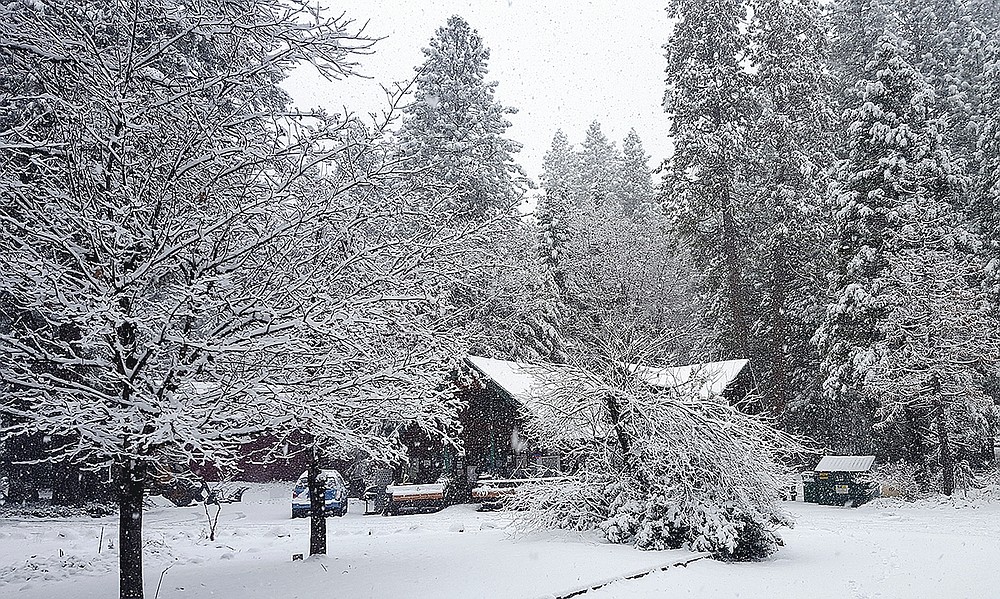 The Cascade Shores General Store is shrouded in a blanket of white snow after the storm system moved through Nevada County, Friday, Jan. 22, 2021. (Liz Kellar/The Union via AP) 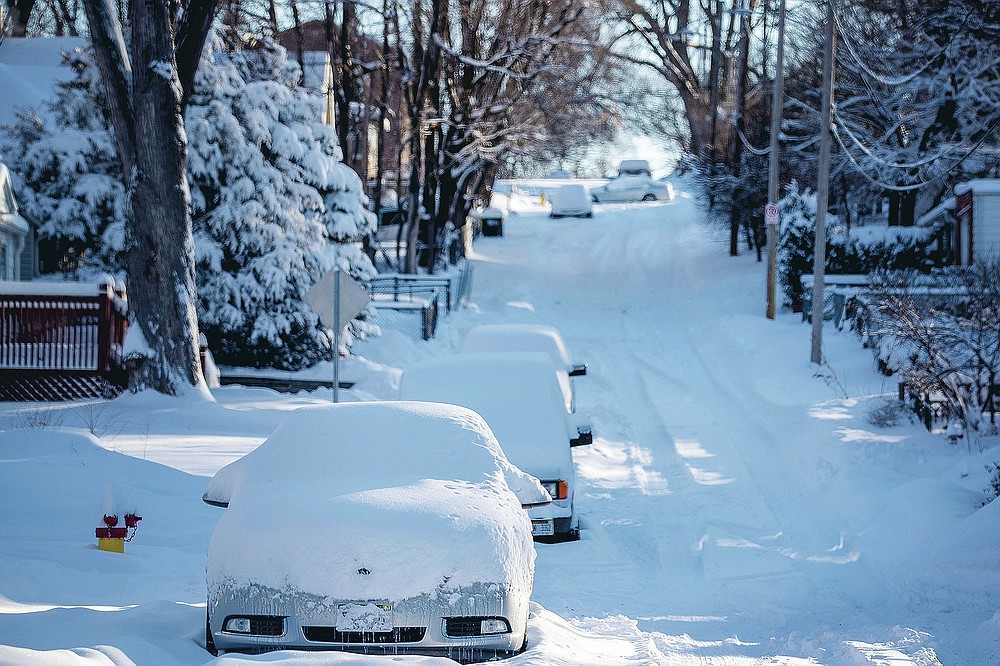 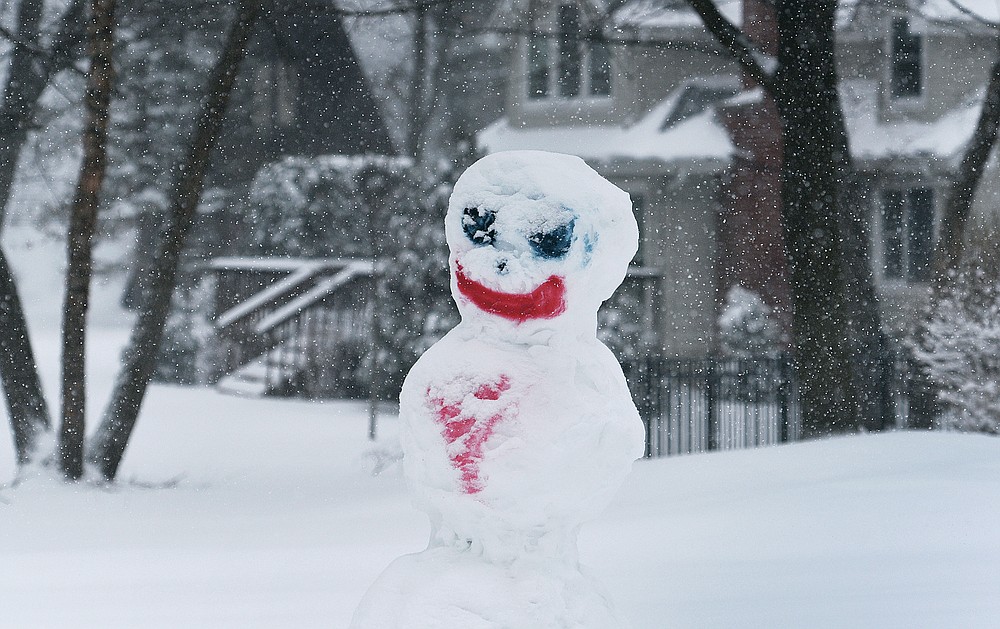 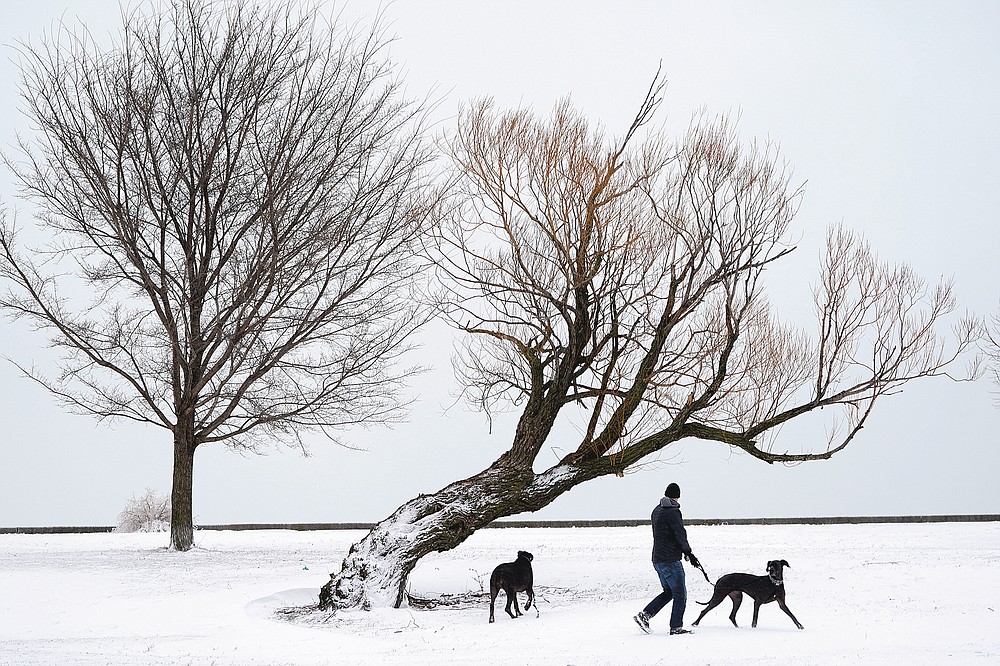 Zarin Taylor walks his two Great Danes, Dottie and Terrabella near Lake Michigan on the Northside of Chicago Tuesday, Jan. 26, 2021. A major winter storm dumped more than a foot of snow on parts of the middle of the country stretching from central Kansas northeast to Chicago and southern Michigan.(AP Photo/Charles Rex Arbogast) 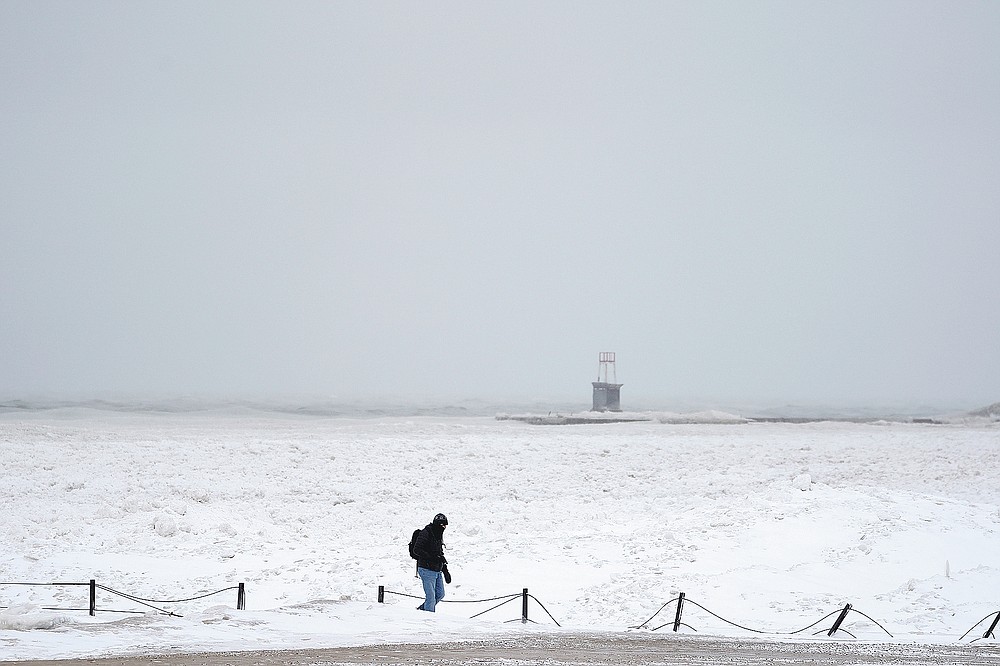 A lone man walks along a frozen section of North Ave. beach on Lake Michigan north of downtown Chicago Tuesday, Jan. 26, 2021. A major winter storm dumped more than a foot of snow on parts of the middle of the country stretching from central Kansas northeast to Chicago and southern Michigan.(AP Photo/Charles Rex Arbogast) 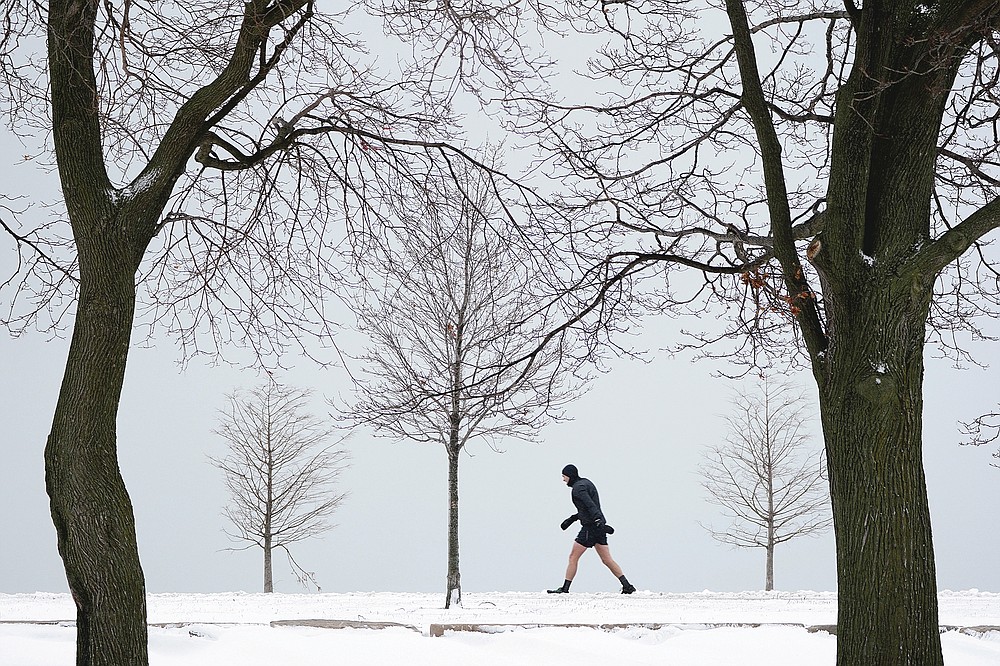 A lone runner leans into a stiff wind near Lake Michigan on the Northside of Chicago Tuesday, Jan. 26, 2021. A major winter storm dumped more than a foot of snow on parts of the middle of the country stretching from central Kansas northeast to Chicago and southern Michigan.(AP Photo/Charles Rex Arbogast) 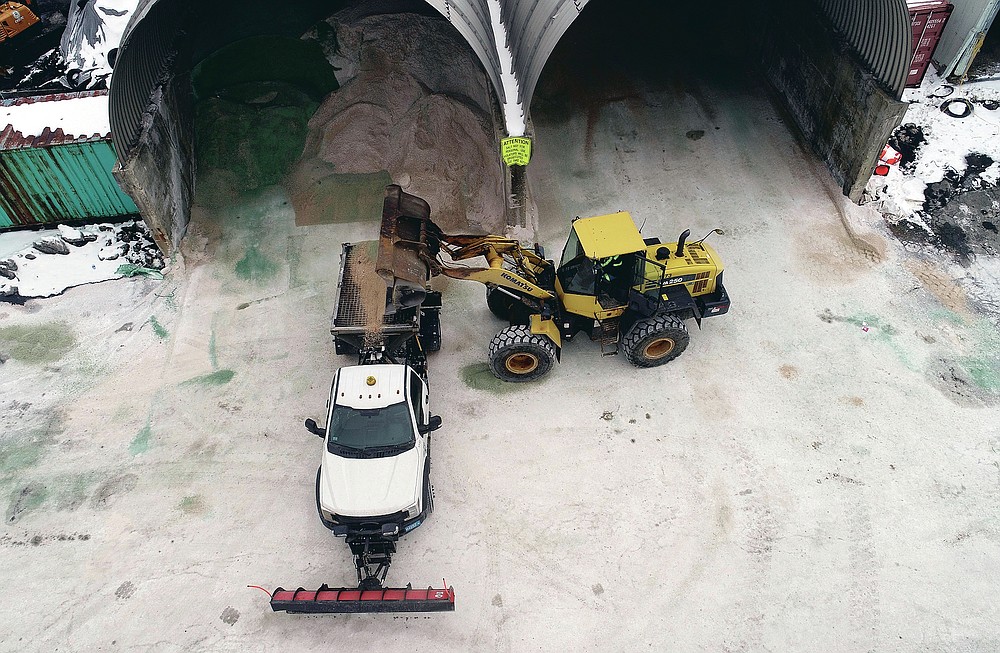 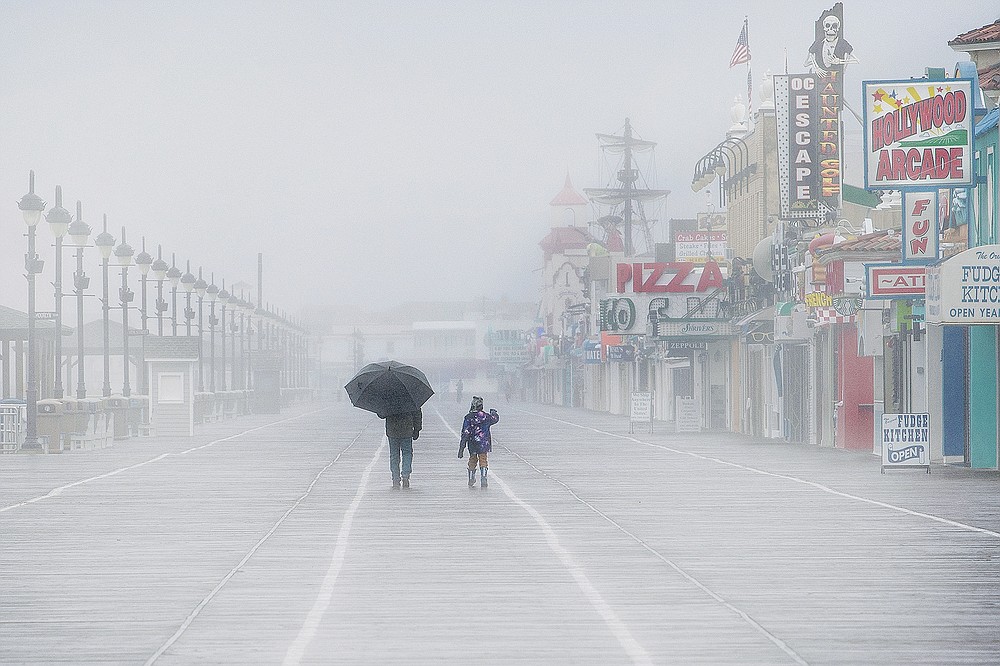 A man shields himself from the rain with an umbrella as he walks along with a child during a rainy and foggy winter afternoon at the Ocean City boardwalk in Ocean City, N.J. (Jose F. Moreno/The Philadelphia Inquirer via AP) 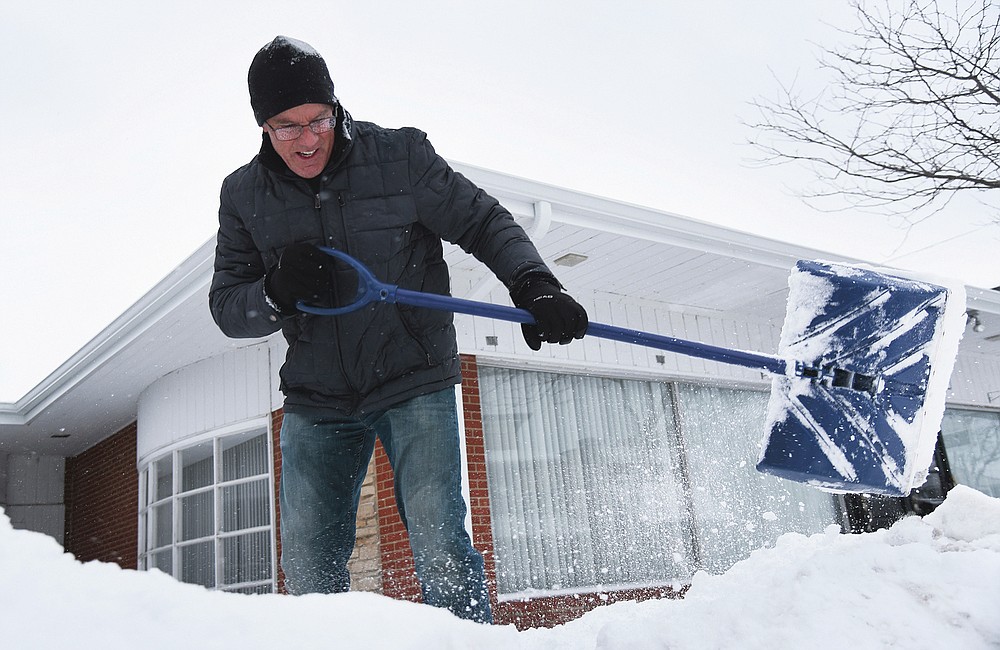