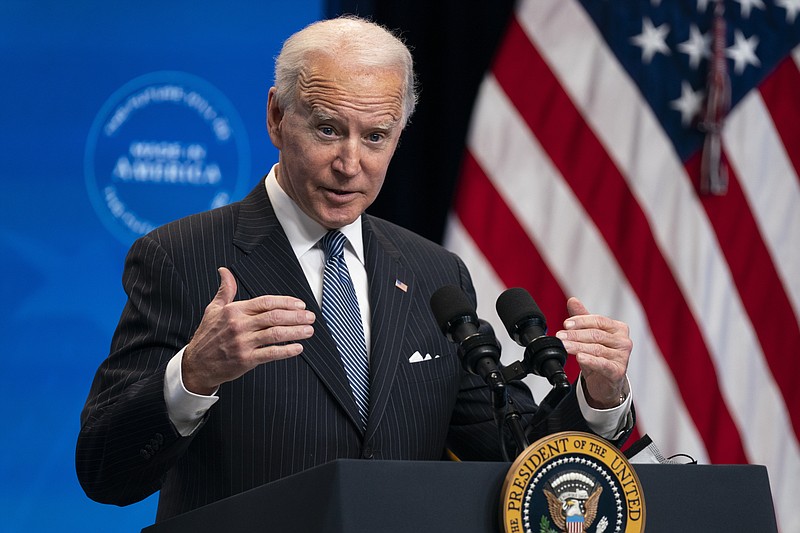 FILE - In this Jan. 25, 2021, file photo, President Joe Biden answers questions from reporters in the South Court Auditorium on the White House complex, in Washington. Biden is unlikely to confront China on trade right away because he wants to focus on the coronavirus and the economy, but he does look set to renew pressure over trade and technology grievances that prompted President Donald Trump to hike tariffs on Chinese imports in 2017. (AP Photo/Evan Vucci, File)

Biden won't confront Beijing right away, economists say, because he wants to focus on the coronavirus and the economy. But he looks set to renew pressure over trade and technology grievances that prompted President Donald Trump to raise tariffs on Chinese imports in 2017.

Negotiators might tone down Trump's focus on narrowing China's multibillion-dollar trade surplus with the United States and push harder to open its state-dominated economy, which matters more in the long run, economists say. But no abrupt tariff cuts or other big changes are expected.

"I think Biden will focus more on trying to extract structural reforms," said Louis Kuijs of Oxford Economics. "It's going to take some time before we get any shift or explicit announcements."

A Chinese foreign ministry spokesman, Zhao Lijian, appealed to Washington to learn from Trump's "erroneous policies" and adopt a "constructive attitude" but gave no indication of possible changes by Beijing.

Trump acted on complaints that are shared by Europe and other traders, but Washington has little to show for its bruising war. It brought President Xi Jinping's government to the bargaining table but roiled global trade, raised consumer prices and wiped out jobs.

The last major development was a year ago, when Beijing promised in the "Phase One" agreement of January 2020 to buy more soybeans and other U.S. exports and stop pressuring companies to hand over technology.

China fell short on those purchases. Amid the coronavirus turmoil, it bought about 55% of what it promised.

China faces more opposition than ever in Washington because of its trade record, territorial disputes with neighbors, crackdown on Hong Kong, reports of abuses against ethnic Muslims and accusations of technology theft and spying.

"We face stiffening competition from a growing and ambitious China," said Tai. "A China whose economy is directed by central planners who are not subject to the pressures of political pluralism, democratic elections or popular opinion."

That means China has to make changes if it wants to make progress, said Raoul Leering, global trade analyst for ING. He said that while many of Trump's statements were "close to nonsense," he was right that China has more trade barriers and official intervention in the economy than the United States.

After 2½ years and 13 rounds of talks, negotiators have yet to tackle one of the biggest irritants for China's trading partners -- the status of politically favored state companies that dominate industries from banking to oil to telecoms.

Europe, Japan and other governments criticized Trump's tactics but echo complaints that Beijing steals technology and breaks market-opening promises by subsidizing and shielding companies from competition.

Those complaints strike at the heart of a state-led development model Communist Party leaders see as the basis of China's success.

Beijing could offer to drop its claim to being a developing economy, a status it insists on despite having become one of the biggest manufacturers and a middle-income society, Leering said. Under World Trade Organization rules, that allows the Communist Party to protect industries and intervene more in the economy.

Giving that up "would be a very important gesture," Leering said.

Trump's opening shot in 2017 was a tariff on $360 billion worth of Chinese imports. Beijing retaliated with tariff increases and suspended soybean imports, hitting farm states that voted for Trump in 2016.

That failed to achieve Trump's goal of moving jobs to the United States. Importers shifted instead to Taiwan, Mexico and other suppliers. The total U.S. trade deficit dipped slightly in 2019, then rose nearly 14% through November last year.

A study by the U.S.-China Business Council and Oxford Economics found the U.S. economy lost 245,000 jobs due to the tariffs. It said even a modest reduction would create 145,000 jobs by 2025.

Trump stepped up pressure by cutting off access to U.S. technology for telecom equipment giant Huawei Technologies Ltd. and other companies seen by American officials as possible security risks and a threat to U.S. industrial leadership. Americans were ordered to sell shares in Chinese companies Washington says have links to the military.

The Communist Party responded by vowing to accelerate its two-decade-old campaign to make China a self-reliant "technology power."

Psaki, the White House spokeswoman, said Biden also was reviewing those issues but gave no indication of possible changes.

Information for this article was contributed by Yu Bing of The Associated Press. 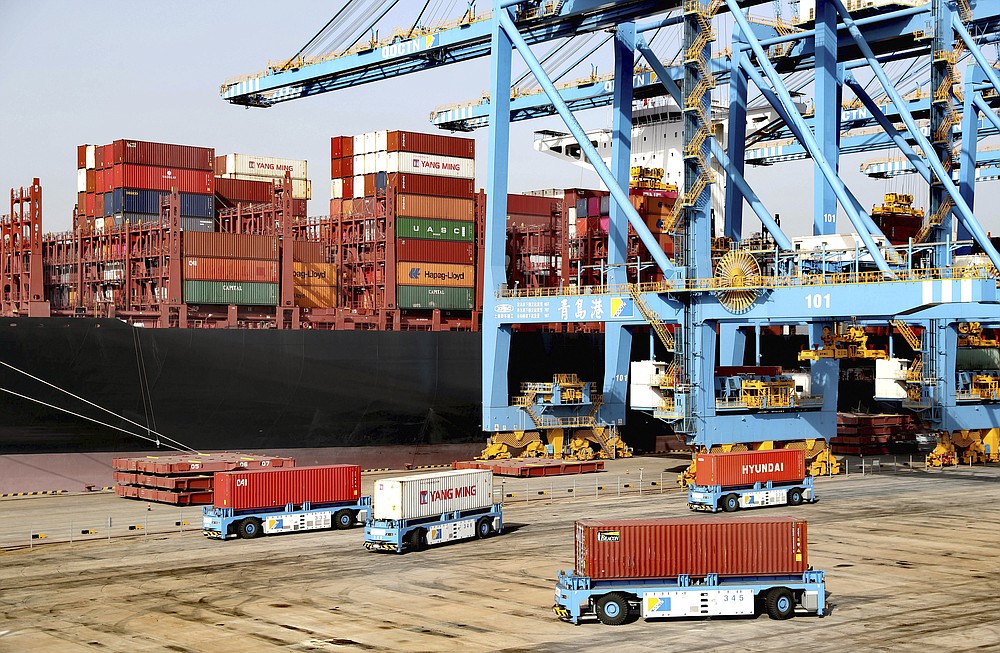 Automated vehicles move shipping containers in a container port in Qingdao in eastern China's Shandong Province, Thursday, Jan. 12, 2021. The U.S.-Chinese trade war isn't going away under President Joe Biden. Biden won't confront Beijing right away, economists say, because he needs to focus on the coronavirus and the economy. However, Biden looks set to renew pressure over trade and technology complaints that prompted President Donald Trump to hike tariffs on Chinese imports in 2017. (Chinatopix via AP)
ADVERTISEMENT