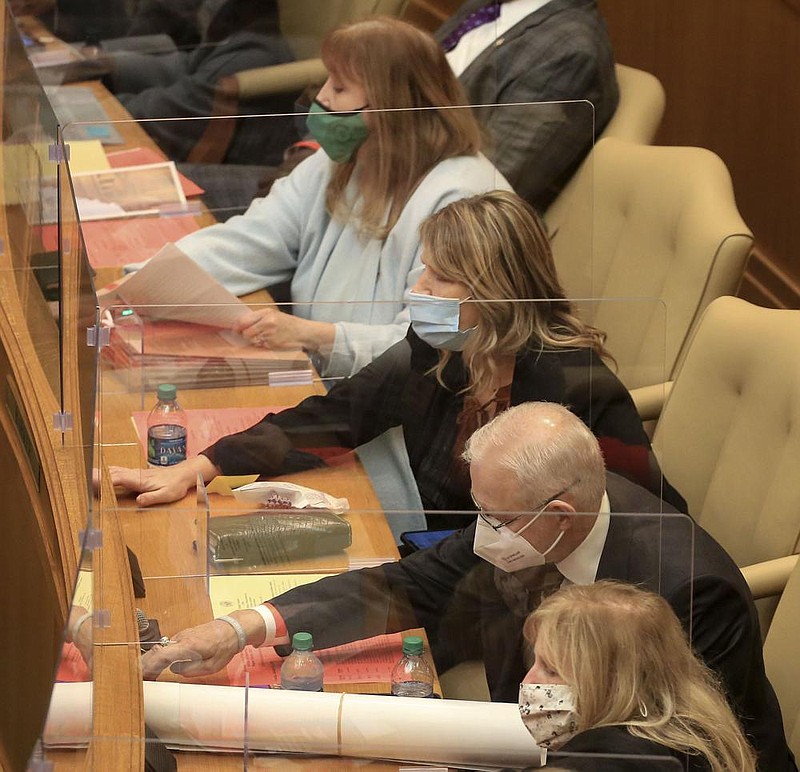 The Arkansas Senate on Tuesday approved a bill that would allow cities and counties to issue bonds to develop broadband infrastructure with the approval of voters.

Senators voted 35-0 to send Senate Bill 74 by Ricky Hill, R-Cabot, to the House for further action.

Hill told senators that “the main thing it does is allows cities, counties and municipalities to partner with a company that produces broadband services.”

The bill also would give the cities and counties the option to issue a bond to expand the partnership, and would reduce restrictions and increase competition for broadband development, Hill said.

Afterward, Hill said the bill would allow the cities and counties to own the broadband infrastructure and lease the infrastructure to service providers to pay off the bonds.

He said Cabot and nine other cities are issuing bonds or other indebtedness for broadband development.

The House Committee on Public Health, Welfare and Labor endorsed Tuesday the replacement of the term “hearing impaired” in Arkansas’ code with the words “deaf, or Hard of Hearing.”

Nathan Burleson, president of the Arkansas Association of the Deaf, said the term “hearing impaired” has fallen out of favor among deaf people because of its negative connotations about a person’s abilities. He spoke in favor of House Bill 1003, by Rep. Charlene Fite, R-Van Buren, which simply replaces the term wherever it appears in the code.

“Hearing impaired was a well-meaning term that is not accepted or used by many deaf or hard-of-hearing people,” Burleson said through a sign-language interpreter. “In the dictionary, impaired means weakness or damaged.”

The committee endorsed the bill on a voice vote, sending it to the House floor for consideration.

Hammer told the committee he hoped they would set an example and not be “the ones that they are having to meet about.”

“If you see me doing something you think that I don’t need to be doing, give me the courtesy of saying, ‘OK, don’t,’ and I’ll do you the same courtesy because I think we are going to set the bar for how everybody else conducts themselves,” he said.

In 2018, the Senate created the Ethics Committee and overhauled its rules to prohibit senators from certain activities that involve conflicts of interest and require more disclosure of other conflicts and of the personal finances of senators. The overhaul action came after federal investigations in the previous few years led to the convictions of several former state lawmakers.

The House Judiciary Committee on Tuesday backed legislation aimed to clarify the law governing the pay for clerks at the Court of Appeals and Supreme Court.

The current law states that clerks at both courts “shall receive the same salaries,” but the heads of both courts have disagreed in the past as to how the law should be applied.

House Bill 1222, by Rep. Carol Dalby, R-Texarkana, would change the wording of the law to say that the clerks “shall be of the same grade, unless the General Assembly approves a pay grade change to either court’s law clerks.”

Chief Justice Dan Kemp, and the chief judge of the Court of Appeals, Brandon Harrison, appeared before the committee to show their support for the bill.

HB1222 was approved in the committee on a voice vote and heads to the House floor for consideration.

The Higher Learning Commission, an accrediting agency, approved the merger in November.

Henderson State University will keep its name and continue to have its own appropriation bill.

Proposal on rehiring retirees moves along

The Senate on Tuesday approved a bill aimed at allowing legislative agencies to rehire retired members of the Arkansas Public Employees Retirement System for certain jobs during legislative sessions sooner than they could otherwise.

Senators voted 35-0 to send Senate Bill 162 by Bill Sample, R-Hot Springs, to the House. The bill would allow the retirees to temporarily work for legislative agencies without a 180-day separation period from employment.

State law now requires state retirees to, regardless of age, be separated from employment for six months before returning to work. Local elected officials, who get at least two years of service credit for each year in office, must separate for a year before returning to work, according to system Executive Director Duncan Baird.

Under SB162, the law would not apply to retirees who, because of their specialized institutional knowledge and experience, work for the House of Representatives, Senate, Bureau of Legislative Research, Arkansas Legislative Audit or the Arkansas Code Revision Commission during a regular session, fiscal session or a special session.

The House Education Committee voted Tuesday to support legislation that would rename the College of the Ouachitas to Arkansas State University Three Rivers.

The legislation, Senate Bill 115, cleared the Senate on Thursday. The board of trustees of the Malvern college voted in February 2019 to join the ASU System and then voted in September to change the college’s name.

The House Revenue and Taxation Committee on Tuesday endorsed a bill that would allow taxpayers with military retirement or survivor benefit income of less than $6,000 to claim a total retirement exemption up to that amount if the taxpayer has additional nonmilitary retirement income.