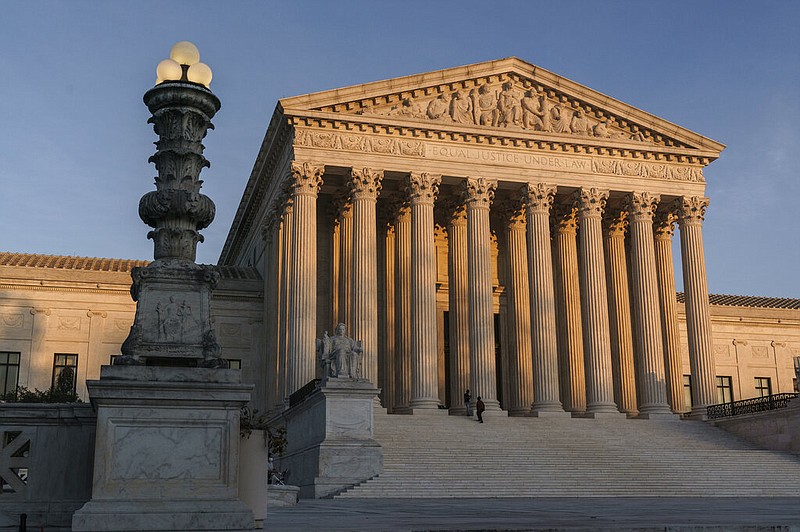 WASHINGTON -- Arkansas should be able to set work requirements for some of its Medicaid recipients, 18 states told the U.S. Supreme Court this week.

The granting of federal waivers, which allowed these "demonstration projects" to proceed, was not "arbitrary and capricious," they said.

Seventeen states signed an amicus curiae -- or friend of the court -- brief arguing that a lower court's ruling is "flatly inconsistent with historical and current practice" and could lead to "potentially disastrous consequences."

The Supreme Court announced in December that it would hear appeals involving the Arkansas and New Hampshire work requirements; both had been struck down by lower courts.

Arkansas hopes to persuade the court to allow it to use the work requirement for the Arkansas Works program, which uses Medicaid dollars to buy private insurance for low-income people.

An 18th state, Nebraska, filed a separate brief arguing that the lower courts' rulings were flawed; its attorney general is Republican as well.

With then-President Donald Trump in the White House, the U.S. Department of Justice defended the waivers.

Now that President Joe Biden is in office, the department's stance is unclear.

A department spokesman Wednesday declined to comment on the litigation.

Under federal law, the secretary of the Health and Human Services Department is authorized to approve "any experimental, pilot, or demonstration project which, in the judgment of the Secretary, is likely to assist in promoting the objectives" of Medicaid and other state-run programs.

In legal filings, Arkansas has argued that the Arkansas demonstration project's aim was "to test the hypothesis that conditioning Medicaid expansion benefits on work, education, or volunteering would lead to healthier outcomes for its beneficiaries."

Critics argued that Arkansas Works was not designed to promote the objectives of the Medicaid program, and they portrayed the works requirement as punitive.

At least 10 states have adopted Medicaid work requirements, according to the Kaiser Family Foundation.

The work requirements vary from state to state. In Arkansas, a recipient could meet the requirement -- unless he was exempt -- by working or doing other approved activities, such as volunteering and going to school.

Under the leadership of then-Gov. Mike Beebe, a Democrat, Arkansas expanded its Medicaid program under the 2010 Patient Protection and Affordable Care Act to cover adults with incomes of up to 138% of the poverty level.

After his election in 2014, Gov. Asa Hutchinson, a Republican, urged the Legislature to keep the program in place, later adding work or job-training requirements.

The administration of President Barack Obama declined to grant the waivers. The changes were subsequently approved by the Trump administration in March 2018 pursuant to Section 1115 of the Social Security Act, which authorizes waivers from federal Medicaid law.

In July, Arkansas Attorney General Leslie Rutledge maintained that the requirements would give able-bodied Arkansans an incentive to enter the workforce, helping them establish "a stronger, more resilient connection with their communities."

The Biden administration hasn't said whether it will defend the waivers or rescind them.

Asked Tuesday about the dispute over work requirements, White House press secretary Jen Psaki referred questions about the ongoing litigation to the Department of Justice.

"I will say that President Biden does not believe, as a principle, it should be difficult for people to gain access to health care," she said. "He's not been supportive in the past, and is not today, of putting additional restrictions in place. And he's spoken about that publicly, too."

A spokeswoman for Rutledge said Wednesday that the work on the appeal continues.

"The Attorney General's office looks forward to defending Arkansas Works at the U.S. Supreme Court so Arkansas may enrich the lives of our fellow Arkansans through commonsense community-engagement requirements."

Officials with the National Health Law Program, which is helping to challenge the waivers, could not be reached for comment Wednesday.

Arkansas lawmakers will consider changing the state's version of Medicaid expansion, with the state planning to seek a new waiver from the federal government for the program because the current waiver expires at the end of this year. The program provides health care coverage for about 300,000 low-income Arkansans.

The Legislature also will consider the spending authority for the program for the next fiscal year, which requires a third-fourths vote in the House and Senate. That requires 27 votes in the 35-member state Senate and 75 votes in the 100-member House of Representatives.

"Regardless of what the Supreme Court says on the work requirement, and whether it is authorized or not, we have to get our waiver by the Biden administration, so we want to shape this in a way that we can get the waiver," Hutchinson said.

The community engagement requirements continue to have the support of the governor.

"We believe that we want to move people from dependence into independence and a part of that is making sure they are adequately trained for work," Hutchinson said.