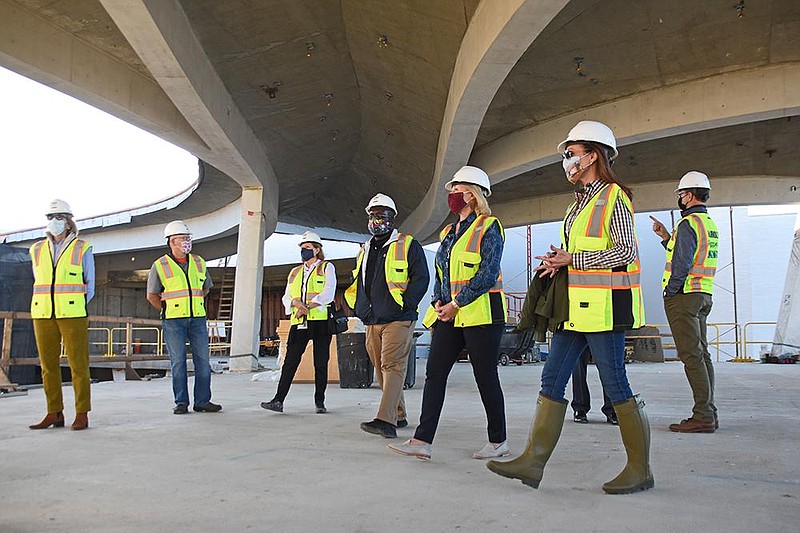 Members of the board of trustees take a tour of the renovations and expansion underway at the Arkansas Arts Center in Little Rock on Thursday, Nov. 5, 2020. (Arkansas Democrat-Gazette/Staci Vandagriff)

Leaders of the Arkansas Arts Center on Monday announced the entity will be rebranded as the Arkansas Museum of Fine Arts and provided updates on the ongoing makeover of the facility.

Back up: What ongoing makeover?

Efforts to redo the museum, which sits in MacArthur Park in downtown Little Rock, date back to 2015. Construction began in 2019.

Officials have dubbed the makeover “transformational,” and Mayor Frank Scott compared the new name to those of similar entities in the region such as “fine art” museums in Dallas and Jackson, Miss., as well as the Crystal Bridges Museum of Fine Art in Bentonville.

The new name is actually old, though — the institution was originally named the Museum of Fine Arts when it was created in 1937. The name was changed to the Arkansas Arts Center in the early 1960s to reflect its statewide mission and varied offerings.

Construction has excavated the building’s original Art Deco entrance to serve as one of two main entryways.

The renovation includes expanding the museum’s footprint of the surrounding park and extensive landscaping, with a new garden and cypress trees replacing parking lots. A restaurant with indoor and outdoor seating will face the park.

How much will the redo cost and who is paying for it?

Though the first publicly floated price tag was just $46 million, the ambition and scale of the project has grown to a current target of $142 million.

As of Monday, leaders said $136 million has been pledged so far.

Little Rock makes annual maintenance payments to the museum, and voters in 2015 approved hotel tax-backed revenue bonds that will generate $31.2 million for the expansion project.

Gov. Asa Hutchinson has pledged $5 million in public money from the state’s rainy-day fund toward the project.

When will the project be done?

Efforts to remake the museum are on track to finish on schedule, sometime in spring 2022, officials said.

Read more on the project from reporter Eric Besson.