Highway Department may not pay for Arkansas 112 side path 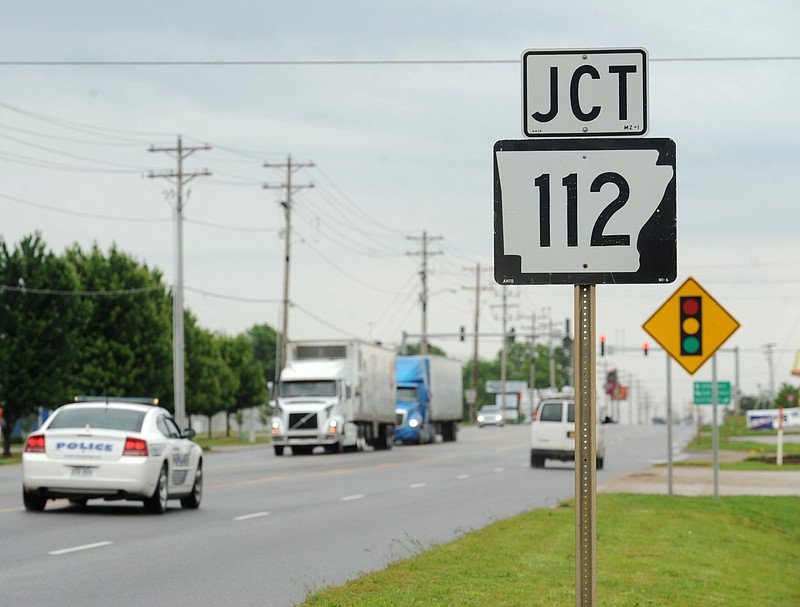 Traffic flows Friday, May 29, 2015, along Henri de Tonti Boulevard in Tontitown near the intersection with Arkansas 112.

SPRINGDALE -- The Arkansas Department of Transportation may not pay for a side path along 16.7 miles of Arkansas 112 between Fayetteville and Bentonville, regional planners learned Wednesday.

The Transportation Department's policy isn't to pay for shared-use, off-street paths along but separate from highways, according to Travis Brooks, who was on hand to discuss the issue. The department considers side paths to be more recreational in nature than a part of the state's transportation system. It will pay for on-street bike lanes.

Planners in Northwest Arkansas want a 12-foot path separated from the road by a six-foot green space and are asking the department to change the policy and pay for the path.

"Are there any active plans to take a 15-year-old policy and all the changes that have gone on across the state and perhaps updating it to where we are in this state?" Johnson asked.

Brooks said Transportation Department administrators are considering the region's request, but have not made a decision.

If the department doesn't change the policy, regional planners or individual cities along the route will have to come up with an estimated $5.5 million for construction costs.

"We're trying to design a project with a consistent access management bicycle facility up and down the corridor," said Tim Conklin, assistant director at regional planning. "It's very challenging. We're not working with just one city. We're trying to have everybody together on this project. Some of the smaller cities, especially, would be very challenged to pay for some state highway infrastructure."

Regional planners in January 2019 agreed to move forward with a vision for Arkansas 112 as a four-lane, north/south corridor with managed access. The Transportation Department is ultimately responsible for doing the design and work.

Regional planners envision Arkansas 112 as a four-lane, divided highway with raised medians, roundabouts and a 10-foot, multiuse path for bicyclists and pedestrians.

A 2015 study of Arkansas 112 tentatively recommended four lanes from Fayetteville to Bentonville, widening and straightening several curves and bypassing at least one town, Cave Springs.

The public has another chance to comment on transportation plans that will for serve as a guide for how the area will look and function with a projected population of 1 million residents in 25 years. Any projects using federal money must be part of the plan.

Regional Planning is developing the 2045 Metropolitan Transportation Plan. The draft document is available at regional planning's website as are comment forms and information. The online public open house and comment period will run from Friday through Feb. 28.

Regional planners hope to give final approval to the plan in March. The plan is required to be updated in the first quarter of 2021.

The plan includes a variety of transportation options and also looks at economic vitality, community livability and quality of life, according to regional planners.

Goals include increasing safety for people walking, biking, riding public transit and driving. It looks at ongoing maintenance for the transportation system as well as preserving corridors and right of way for future corridors.

Maximizing the capacity and reliability of existing, regionally significant roads is part of the plan, along with access and congestion management techniques and public transit and biking networks. The plan also addresses ways to minimize travel times.

The plan includes finding a dedicated, reliable funding source for regional transit systems over the next 25 years.

Rolled into the plan are elements to protect the environment, such as a Northwest Arkansas Open Space Plan and the Cave Springs karst study, which are aimed at improving storm water drainage management.

The 2045 plan includes projects paid for with the half-cent state sales tax passed by voters in November. Those include completing work on Arkansas 112, the airport access road and both ends of the U.S. 412 Northern Bypass, from Tontitown on the west to Arkansas 112 on the east, and improvements to the Interstate 49/Wedington Drive interchange and the I-49/Martin Luther King Jr. Boulevard interchange in Fayetteville.

Have a say on the plan

The Northwest Arkansas Regional Planning Commission is hosting an online public open house and public comment period that will run from today through Feb. 28.