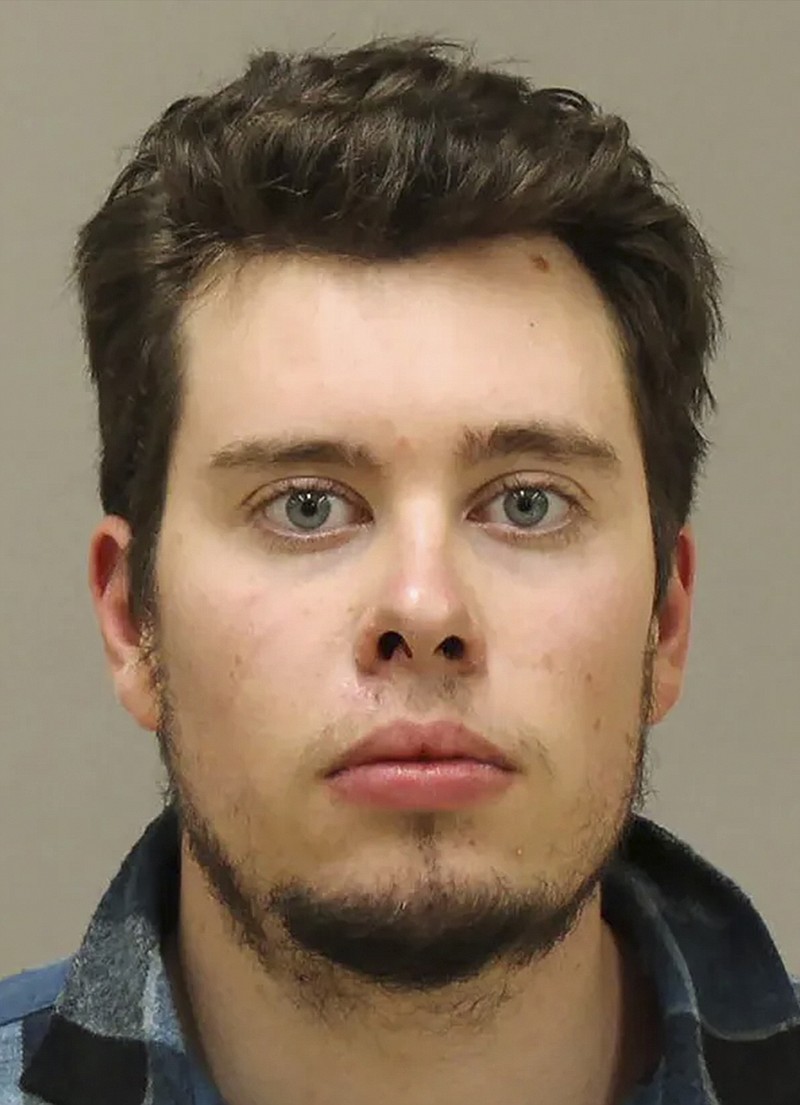 FILE - In a photo provided by the Kent County Sheriff, Ty Garbin is shown in a booking photo. Garbin, one of six men charged in an alleged plot to snatch Michigan Gov. Gretchen Whitmer has agreed to plead guilty to a kidnapping conspiracy, according to court document filed Wednesday, Jan. 27, 2021. The filing was made by prosecutors ahead of Ty Garbin's appearance in federal court in Grand Rapids. (Kent County Sheriff via AP File)

DETROIT -- One of six men charged in a plot to kidnap Michigan Gov. Gretchen Whitmer pleaded guilty Wednesday to conspiracy, admitting that the group discussed a scheme to snatch her at her lakeside vacation home and destroy a bridge to slow down police.

Ty Garbin's guilty plea comes about four months after arrests were made. His testimony could strengthen the government's case against the others and back up evidence collected by informants and undercover agents.

Garbin appeared in federal court in Grand Rapids a few hours after a plea agreement loaded with details about the operation was filed, including his pledge to fully cooperate with investigators. There was no agreement on a sentencing range, but his assistance could help him when he returns July 8.

The FBI in October said it broke up a plot to kidnap Whitmer, a Democrat, by anti-government extremists upset over coronavirus restrictions she had imposed in Michigan. Six people were charged in federal court, while eight others were charged in state court with aiding them.

WASHINGTON -- A Senate panel Wednesday easily advanced President Joe Biden's nomination of Pete Buttigieg to be transportation secretary, setting up a final confirmation vote for a key role in Biden's push to rebuild the nation's infrastructure and confront climate change.

The Commerce Committee approved the nomination of Buttigieg, a 39-year-old former mayor of South Bend, Ind., on a 21-3 vote.

His nomination now heads to the full Senate, where a vote could happen as early as this week. He would be the first openly gay person, and one of the youngest, confirmed by the Senate to a Cabinet post.

Buttigieg, in a tweet Wednesday, thanked the members of the Commerce Committee for "their vote of confidence in me." He said he looked forward to teaming with members of the committee "as we get to work on infrastructure and building our economy back better."

At his confirmation hearing last week, Buttigieg received bipartisan praise as he pledged an immediate focus on transportation safety while pointing to a "generational" opportunity to help remake how people travel.

AUSTIN, Texas -- A physician with a terminal cancer diagnosis killed a pediatrician and then himself after taking hostages at a doctor's office in Austin, police said Wednesday.

A SWAT team found the bodies of Dr. Katherine Lindley Dodson and Dr. Bharat Narumanchi late Tuesday after negotiators spent hours trying to speak to the people inside the office, police said.

Narumanchi did not work at the clinic where he held five adult employees hostages for hours, Austin police Lt. Jeff Greenwalt said. Four were either let go or escaped, and no children were there at the time, he said.

Hostages who escaped the office told officers at the scene that Narumanchi had entered Tuesday carrying a pistol, a shotgun and two duffel bags, police said. Authorities have not yet said how Dodson and Narumanchi died.

Narumanchi had applied for a volunteer position at the clinic a week ago and was declined, but otherwise had no known connection to Dodson or the clinic, Greenwalt said.

Narumanchi had recently been given "weeks to live" after his cancer diagnosis, and investigators believe that likely played a role in his actions, Greenwalt said.

OKLAHOMA CITY -- The Oklahoma attorney general's office is attempting to return $2 million worth of a malaria drug once touted by former President Donald Trump as an effective treatment for covid-19, a spokesman said Wednesday.

Alex Gerszewski, a spokesman for Attorney General Mike Hunter, said Hunter is attempting to negotiate a return of the 1.2 million hydroxychloroquine pills that Oklahoma acquired in April from a California-based supplier, FFF Enterprises. He said the office was acting on a request from the Oklahoma State Department of Health, which authorized the purchase.

Republican Gov. Kevin Stitt defended the purchase last year, saying the drug was showing some promise as a treatment in early March and he didn't want to miss an opportunity to acquire it.

"I was being proactive to try and protect Oklahomans," Stitt said at the time.

The drug has since been shown to have little or no effect on severe cases of covid-19, and a former state health official chalked up Oklahoma's purchase to something that happens in "the fog of war."

While governments in at least 20 other states obtained more than 30 million doses of the drug through donations from the federal reserve or private companies, Oklahoma and Utah bought them from private pharmaceutical companies.