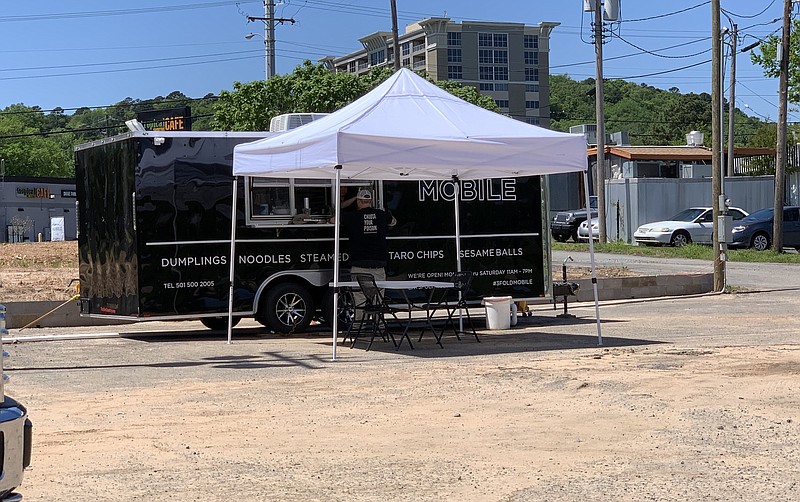 Bruno's Little Italy, 310 Main St., posted on Facebook late Sunday night that the restaurant is once again "temporarily CLOSED because one of our staff tested positive for the coronavirus. We will reopen once we have all tested negative, quarantined and have re-sanitized the facility."

However, the indefinite period of closure for Loca Luna, 3519 Old Cantrell Road, Little Rock, which shut down Jan. 6 citing "this outrageous surge in covid-19 cases," turned out to be short-lived. It reopened Tuesday.

The Faded Rose, 1619 Rebsamen Park Road, Little Rock, closed all last week after posting Jan. 18 on Facebook that "[o]ne of our back of the house team members has tested positive for covid," reopened on Monday.

And Black Angus, 5100 W. Markham St., Little Rock, which had a sign "closed for cleaning" on the door over the weekend, evidently after a coronavirus contact — a Saturday Facebook post thanks Hillcrest Family Clinic for testing the staff — also reopened Monday.

Lisa Zhang, owner of Three Fold Noodles & Dumpling Co., 611 S Main St., Little Rock, has bought the former Pinnacle Valley Restaurant, 8501 Pinnacle Valley Road, Little Rock, initially intended to be a Three Fold prep facility, but, says her manager, Rebecca Yan, there's a chance it could expand to more than just a production facility and that Three Fold Mobile, a food truck, could be a part of it as soon as this spring. Meanwhile, Yan says, Zhang put a hold on the planned prep facility/restaurant at 1509 Rebsamen Park Drive in Little Rock's Riverdale, where Three Fold Mobile is currently parked, right after the start of the pandemic, in part because of the cost — $4 million to $5 million — at a time when the business' priority had to be keeping the staff employed. Zhang has since put it on the market (a for-sale sign has sprouted on the property) while focusing on the new site, for which the start-up cost will be considerably lower. 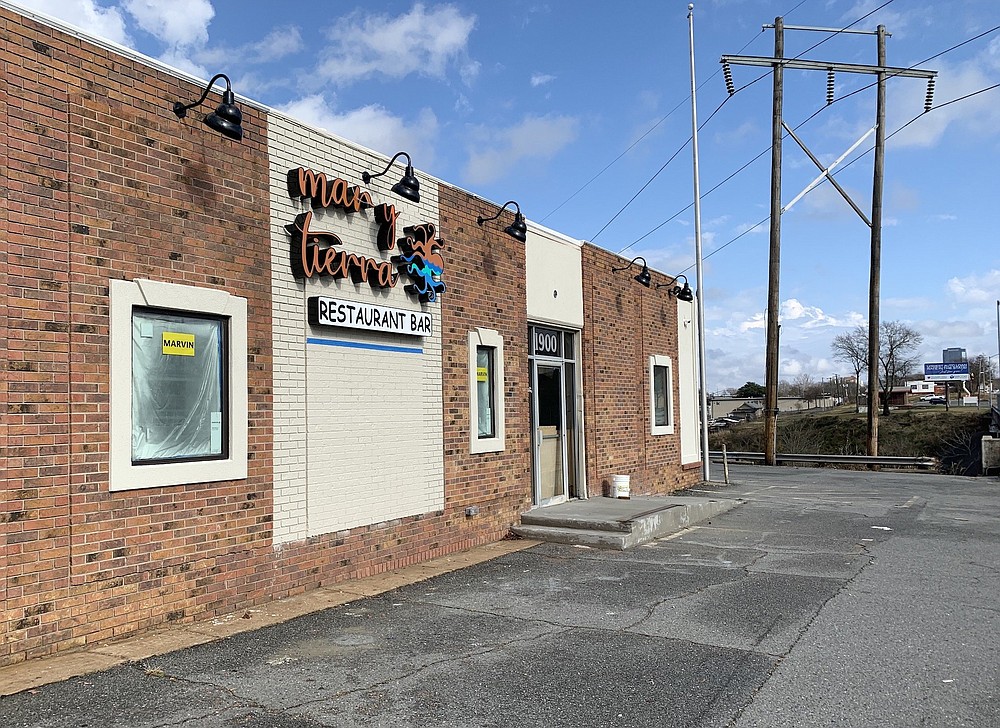 A sign has appeared on the front of Restaurant Bar Mar y Tierra at 1900 E. Third St., near the state Capitol in Little Rock, signaling that work on the exterior is, or is nearly, complete. (Arkansas Democrat-Gazette/Eric E. Harrison)

Still no target opening date from owner Gracie Soto, but we're continuing to monitor progress on Restaurant Bar Mar y Tierra, in the eastern half of the brick building at 1900 W. Third St., Little Rock. There's a nice sign on the front and most of the exterior work appears to be finished. "Marvin" on the windows is apparently the glass company.

We haven't yet heard it directly from Darin Keith, owner of Jacksonville's Keith & Co Artisan Sandwich Shoppe (he hasn't been returning our phone calls), but we're told there is an opening target in first week in February for Bennett's, in the the longtime home of Zaffino's by Nori, 2001 E. Kiehl Ave., Sherwood. Whereas Keith & Co basically does breakfast and lunch, the new place will offer counter service for lunch and casual sit-down dinner and a menu focusing on steak, fish and pasta. Tentative hours, at last check: 10:30 a.m.-9:30 p.m. Monday-Saturday with a 9 a.m.-3 p.m. Sunday brunch. The phone number of the Jacksonville shoppe is (501) 515-1313.

The North Little Rock Planning Commission has received a site plan for Arkansas' first Waldo's Chicken & Beer outlet, going into the former Johnny Carino's, 4221 Warden Road, North Little Rock (that's the service road that runs north to south along U.S. 67/167, "behind" McCain Mall). The plan calls for demolishing the building and for two drive-thru lanes. As we recently reported, the Keet family's JTJ Restaurants firm is gearing up to open as many as 20 outlets in Arkansas and Oklahoma. The concept belongs to Nashville, Tenn.-based Fresh Hospitality, from which the Keets also franchise their eight Arkansas Taziki's Mediterranean Cafe restaurants. Waldo's chief features are fried and rotisserie-roasted chicken with house-made sauces and sides, and as many as 12-16 beers on tap, some of which will be local craft brews. Target to open is sometime in June. 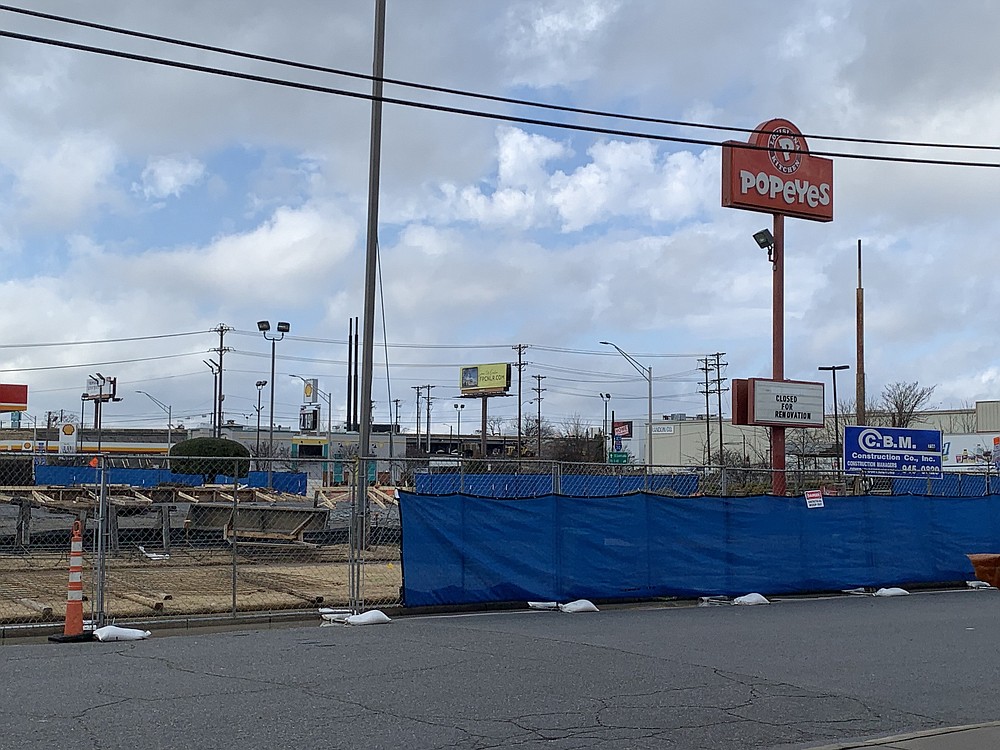 The Popeyes Louisiana Kitchen on North Little Rock’s East Broadway has been razed and a construction on a new one has begun. (Arkansas Democrat-Gazette/Eric E. Harrison)

And speaking of North Little Rock, the Popeyes Louisiana Kitchen, 716 E. Broadway, has been demolished and construction has begun on a new one. Danny Gilliland of franchisee Sweet "P" Enterprises says the target to reopen is mid-April, and confirms that this was the first Popeyes in the Little Rock metro area.

Meanwhile, on the south side of the river, Business section reporter Noel Oman has been perusing Little Rock building permits from that city's Planning Commission, and ran across two of interest: $150,000 for the remodel of the Taco Bell at 719 Broadway and $750,000 worth of work, to include new decor and remodels for the bakery and deli for the Kroger at 614 Beechwood St. in Hillcrest.

Kyle Pounders' beta test of his Excaliburger food truck as a drive-thru operation last week was sufficiently successful that he's keeping it going. "If you didn't get burgers last week or you just didn't get enough, Excaliburger is back for another round," Pounders posted in an email blast to customers. He didn't post the location but last week the truck was parked on a lot at Cantrell and Cedar Hill roads in Little Rock's Riverdale. The process involved signing up in advance for a burger with cars lining up, some of them for as long as 30 minutes, while Pounders checked the order sheet and handed out burgers from the food truck's front door. This week he will continue to serve pre-order burgers — visit excaliburger.com — but "next week we will have a full and trained crew" that "will allow Excaliburger to serve the random drive-thru customers." And starting Feb. 2, they'll open at 11 a.m. Tuesday-Saturday for lunch "with a set number of cheeseburgers and go till we sell out, usually early-mid afternoon," and resume for dinner from 5 p.m. until they sell out.

Comes now The Grumpy Rabbit, 105 Front St. SW, Lonoke. James Hale, former co-owner/chef at Acadia and most recently head guy at the Capital Bar and Grill in the currently not-operating Capital Hotel (also formerly sous chef at Andre's Hillcrest and Spaule), is the executive chef, with former Little Rock pastry chef Tamara Murray, who has been handling special events for Seattle sports teams, as the executive sous chef. Owners Gina and Jim Wiertelak are promising "quality American-style fare that keeps you coming back for both excellent food, and also a unique dining experience" while "contributing to and supporting historic downtown Lonoke." Posted hours are 11 a.m.-9 p.m. Tuesday and Thursday; 11 a.m.-9 p.m. Wednesday, Friday and Saturday; and 11 a.m.-2 p.m. for Sunday brunch. The phone number is (501) 438-8005; the website is grumpyrabbitlonoke.com; and the Facebook page is facebook.com/grumpyrabbitlonoke.

We have no details yet on location(s) or a timeline, but Boise, Idaho-based chain-franchise "concept" Gyro Shack plans to expand into the Little Rock market. Franchise owners Mark Urness and Matt Jeffries "have positioned the brand for large-scale growth targeting Little Rock and other key regions throughout the southern half of the United States," according to a news release, which noted Jeffries "has restaurant operations experience dating back more than 20 years." There are, as of this writing, nine Gyro Shack locations offering "Chicago-style Greek gyros, served fast and made-to-order," with plans to add five franchise locations in 2021. Check out the menu at gyroshack.com; if you're looking for a franchise opportunity, visit: gyroshack.com/franchise.

Restaurants in Fayetteville, Russellville, Blytheville, Pine Bluff, Little Rock, Rogers and Springdale are among the finalists for the Division of Arkansas Heritage's 2021 class of the Arkansas Food Hall of Fame.

Finalists in the Proprietor of the Year category are:

And the finalists for "Gone But Not Forgotten" honors:

Winner of a fifth category, the People's Choice Award, is based on the number of nominations, so there are no finalists. The winner will be announced during a virtual Feb. 22 induction ceremony.