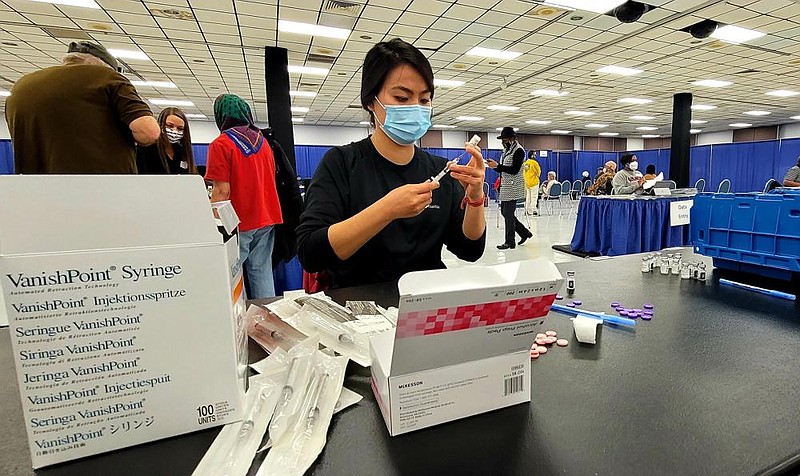 A volunteer draws the covid-19 vaccine into a syringe for a nurse. Volunteers including pharmacy techs, medical students, nurses and doctors helped out Friday at the Pine Bluff Convention Center. (Pine Bluff Commercial/Eplunus Colvin)

The parking lot was packed, looking more like a sold-out event, but despite the dire circumstances that caused the gathering, Jefferson County's most vulnerable population was swinging and swaying to the sounds of oldies as they waited their turn to receive their shots.

"We are coming together to vaccinate 1,000 people in one day," said Smith, who added that the goal was to vaccinate about 100 people an hour so, by the end of the nine or 10 hours, the number would be reached.

The outreach included the 70 and older population with a focus on those who did not have access to the internet or had difficulties scheduling their appointment online.

From 8 a.m. to 6 p.m. a smooth transition of senior citizens received the covid-19 vaccination. From temperature checks to the 15-minute observation area with emergency medical technicians on stand-by, the event ran without a hitch.

"We partnered with Rep. Vivian Flowers, the mayor's office, and several churches," said Lelan Stice of Doctor's Pharmacy, who added that the Arkansas Department of Health used the system from Doctor's Orders Pharmacy to schedule people from all over Jefferson County. "Everyone that came is in their time slot and that's how we've been able to maintain the social distancing."

Senior citizens hummed along to familiar tunes, some tapping their feet to the beat as they waited in the seating area. And despite the large number of people getting shots, there did not appear to be any congestion or long wait times.

"It's almost been a perfect storm in a really good way for Pine Bluff," said Flowers. "Everything was thought of so it could be organized down to having a separate area for people who couldn't get out of their cars."

A concierge-type service transported senior citizens in golf carts to and from their cars with the help of Harbor Oaks Golf Club, which supplied the carts.

Even Mayor Shirley Washington assisted with wheelchair assistance while volunteers from all over Arkansas, including UAMS in Little Rock, assisted with vaccine administration.

"It's a very high level of officials here who understand this is important," said Flowers. "It's about people and they came to Pine Bluff today to be a part of the crew of volunteers to make sure it ran smoothly."

According to Smith, officials ended the day with 850 vaccinations administered. But the 1,000 figure was actually topped. Stice said about 2,000 vaccinations would be administered in total, counting all locations that were doing the vaccines on Friday.

"We vaccinated about 360 at Doctor's Orders clinic on 28th Street and the hospital is vaccinating about 450 at First Baptist Church on the south side of town," he said.

Flowers said she was proud of the works that she and her colleagues put together with the Pine Bluff delegation along with house members Ken Ferguson and Mike Holcomb when it came to getting more doses in the state and the attention that has been drawn from the push.

When Phase 1B of the state's covid-19 vaccination plan rolled out to cover school staff, daycare workers, and those who are 70 and older, Arkansas did not have enough doses for the increase.

The state was receiving nearly the same amount of doses that it did in the initial phases.

According to health officials, shipments only included a few vaccines at a time, and with the increase of people in Phase 1B the average was less than 500 doses per county.

Stice said officials are trying to establish a model that can be used across Arkansas.

"We've had conversations about planning another one for southeast Arkansas, trying to do one down there," said Stice, who added that officials are looking to serve citizens who are homebound and want to be vaccinated.

Not just a Jefferson County movement, the day's events are something that Flowers wants to see happening all across Arkansas.

"We know that if we are suffering from the lack of resources, you can imagine what's happening in Dumas, Altheimer, or in other rural areas south of Little Rock," she said. "It's not just about us; it's about our whole state, and if people are not being served here and in other parts of the state, then we are not doing well as a state." 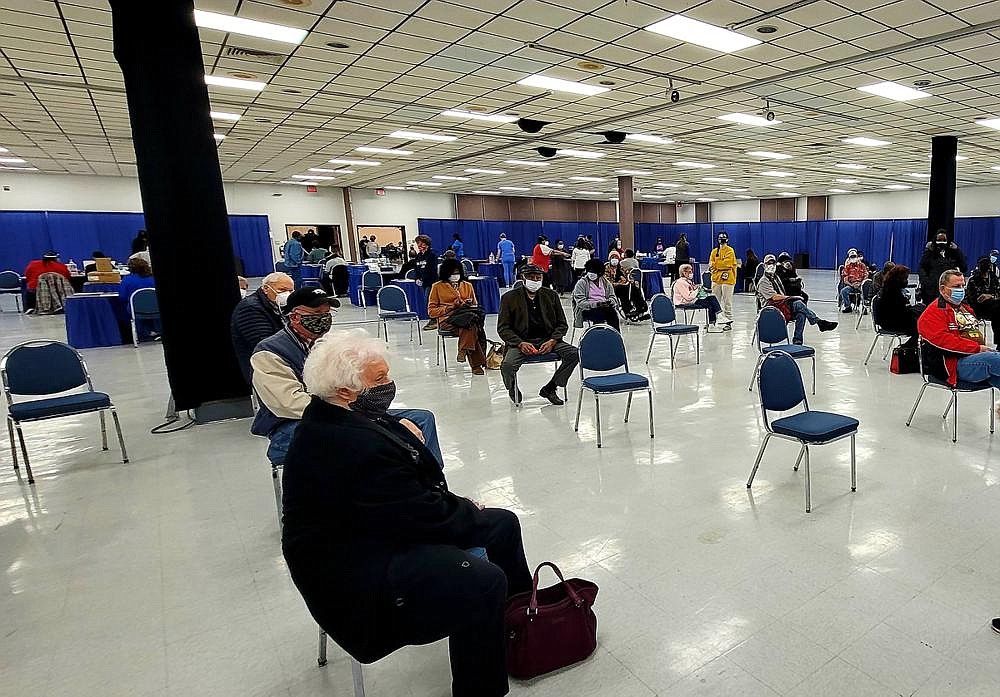