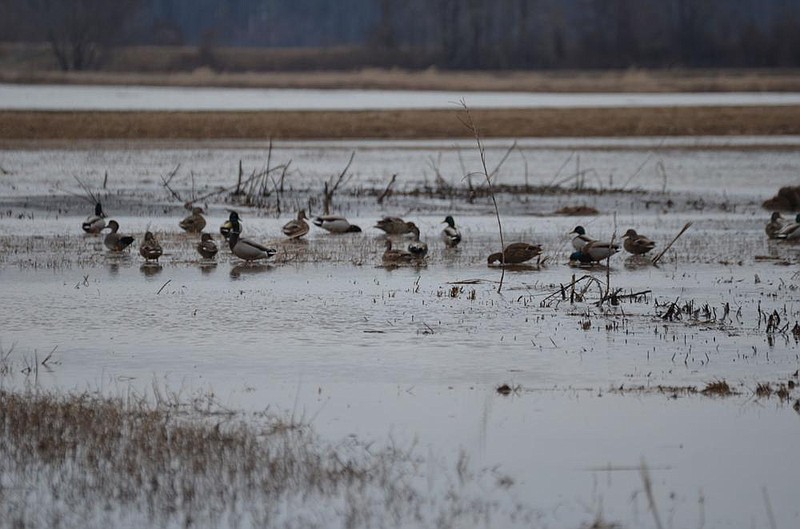 Concentrations of late season ducks find sanctuary on plentiful habitat away from hunting pressure. (Special to The Commercial)

With iPad in hand, he approached wader-wearing waterfowlers walking up from their boats with one goal in mind, conducting a survey of that day's experience in the woods.

"The series of questions is designed to assess the overall daily hunting satisfaction of hunters. A few additional questions address what factors might positively impact or detract from the experience. We ask things like what did you think of the water level in the woods, did you feel overcrowded by the number of hunters around and how many birds did you harvest?"

Naylor said, "We also ask age of hunter, number of years hunting WMAs, how many days they hunt public lands per year and ZIP code among other things. Their answers to these questions help us evaluate a hunter's experience level compared to how they feel about our current management practices. We're looking for differences in how long-term hunter views differ from relatively new ones. We may also figure out patterns of what really drives satisfaction."

According to Taylor, the answer to the number of birds seen and harvested Friday was few to none. Naylor addressed the poor reports with his take on the 2020-21 season.

"The classic term we always hear is hunting has been 'spotty.' We talk to a few people that say they've had good success. Not wanting to give away their secrets, most people don't speak up too much about great hunting until the season is coming to an end. The recent rain brought a few doses of added habitat. Any little change causes some regional relocation of birds. In other cases, birds may have finally exhausted certain resources where they've been and have to look for new ground.

"Recently, folks have been seeing fields full of pintails and shovelers. That's a strong indication of the spring migration back north. Those species of birds are returning from their wintering grounds in Mexico. It would be unusual for mallards to be going south while pintails and shovelers are already headed north."

Naylor continued, "We completed our final aerial waterfowl survey for the 2020-21 wintering period between Jan. 17 through 20. The Delta mallard population estimate was about 200,000 birds lower than the 2010 to 2021 long-term average but similar to late January estimates over the last few years. Mallard numbers don't normally increase after the first week of January but still proved up some from two weeks previous. However, they're still lower than the long-term."

"There is a funny storm system forecast for the weekend, throwing a lot of atmospheric change into the mix. Maybe hunters in the fields will find a stormy Saturday to their satisfaction while flooded timber waterfowlers will see a sunny, windy Sunday bring a happy conclusion to the hunt," he said.