One of the mystery plants for this week was a series of trees with large roots on the ground and around buildings. 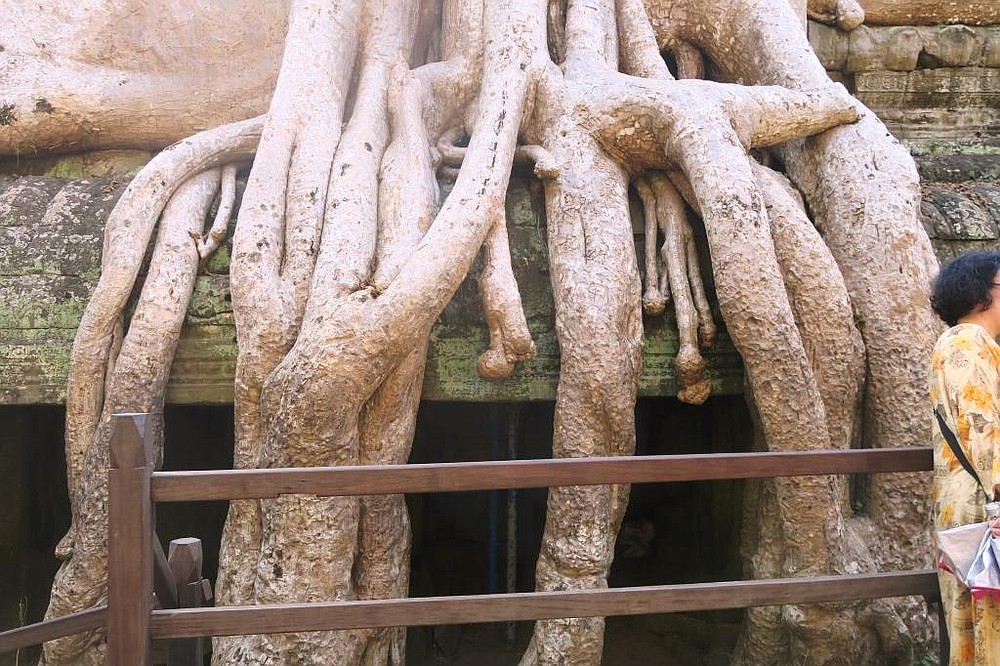 There was a lot of interest in the plants, with quite a few guesses. While there were several species we saw in our travels to Vietnam and Cambodia, collectively the trees are called strangler trees, since they kill other trees and have done massive damage to the temples as well. 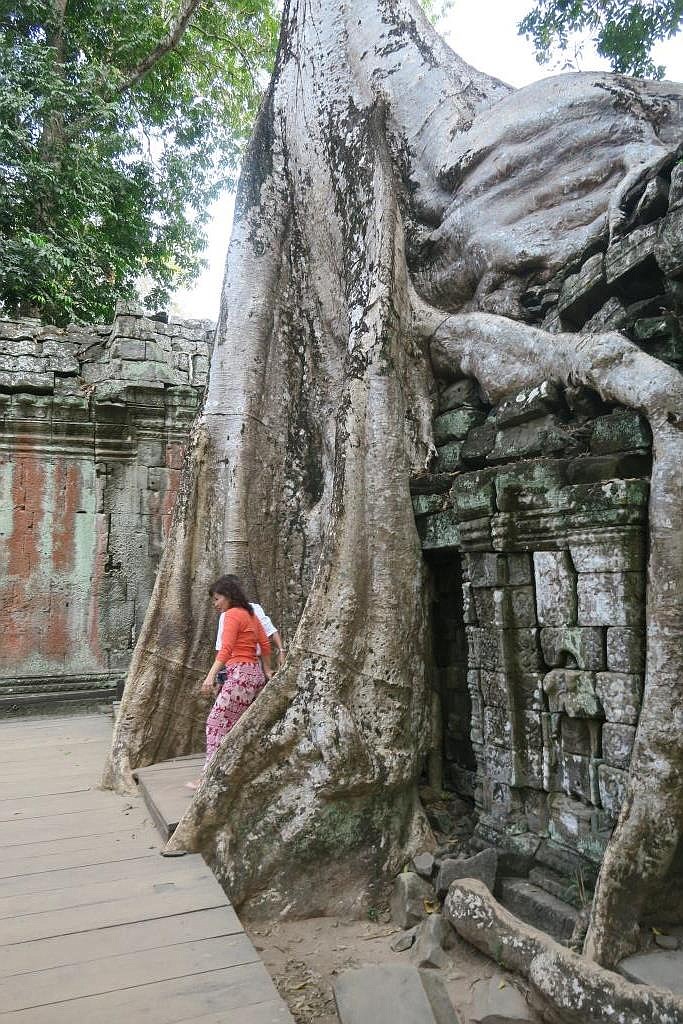 We have seen examples of strangler trees in Costa Rica, 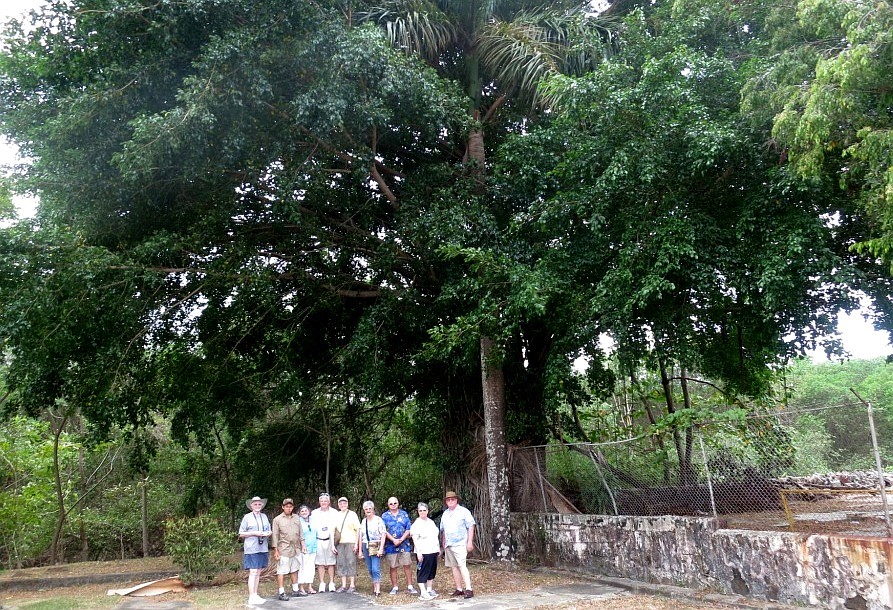 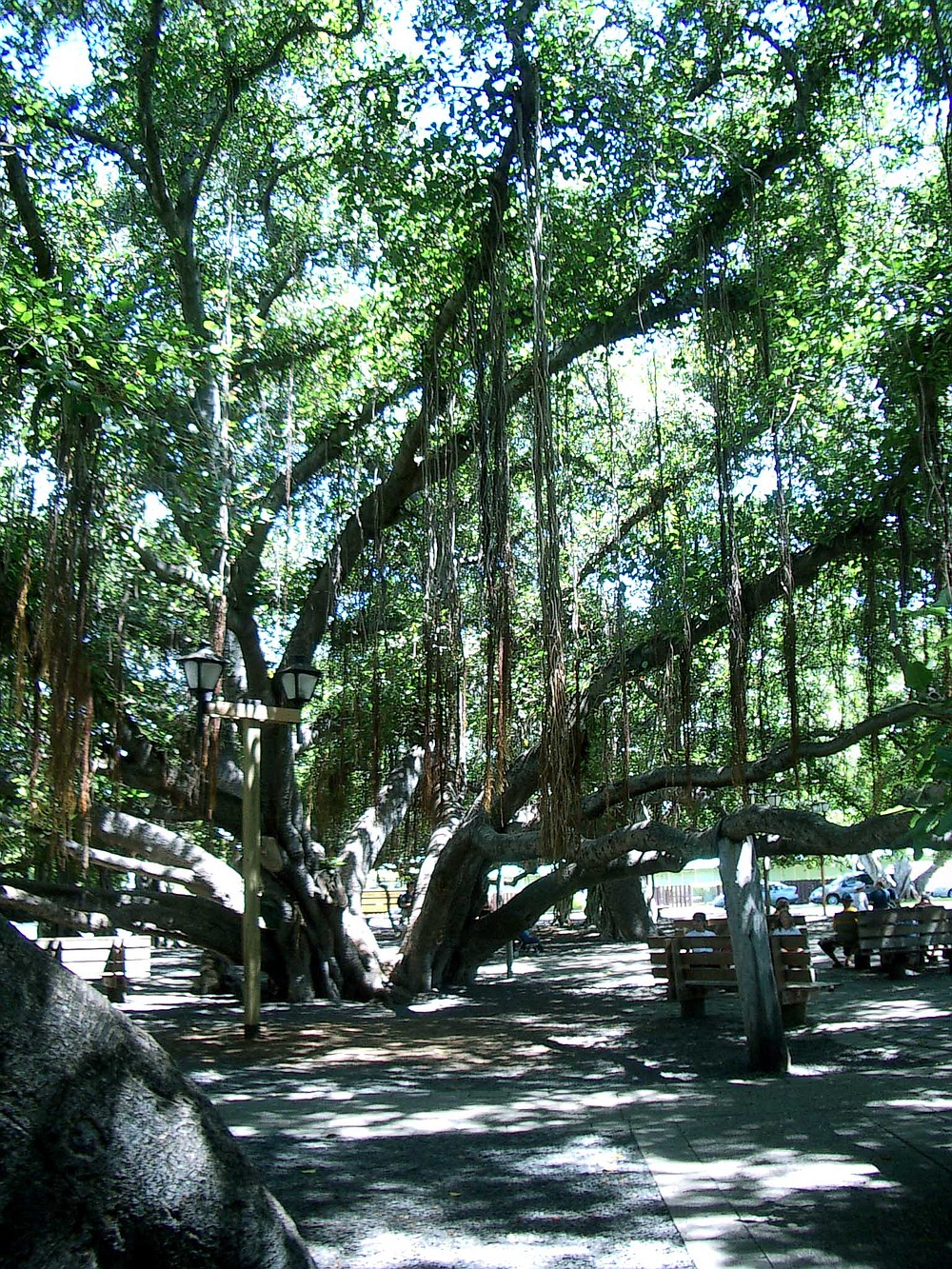 New Zealand and even in southern Florida.

There are several species of trees that get the common name strangler tree. The most common is the strangler fig- Ficus. There are actually several species of ficus that have this growth habit. They get their start in life from a small seed which a bird drops into a larger tree. The seed germinates and then gets its nutrients from the rain and the sun collected on the host tree. It continues to feed from the host as it sends slender roots down to the ground and around the host tree. Eventually the roots hit the earth and the trees grow aggressively, strangling out their host tree and sending roots outwards. Ficus trees are evergreen.

In Cambodia, we saw two species of deciduous trees that were even larger and more aggressive than the strangler fig— the Thitpok - Tetrameles nudiflora 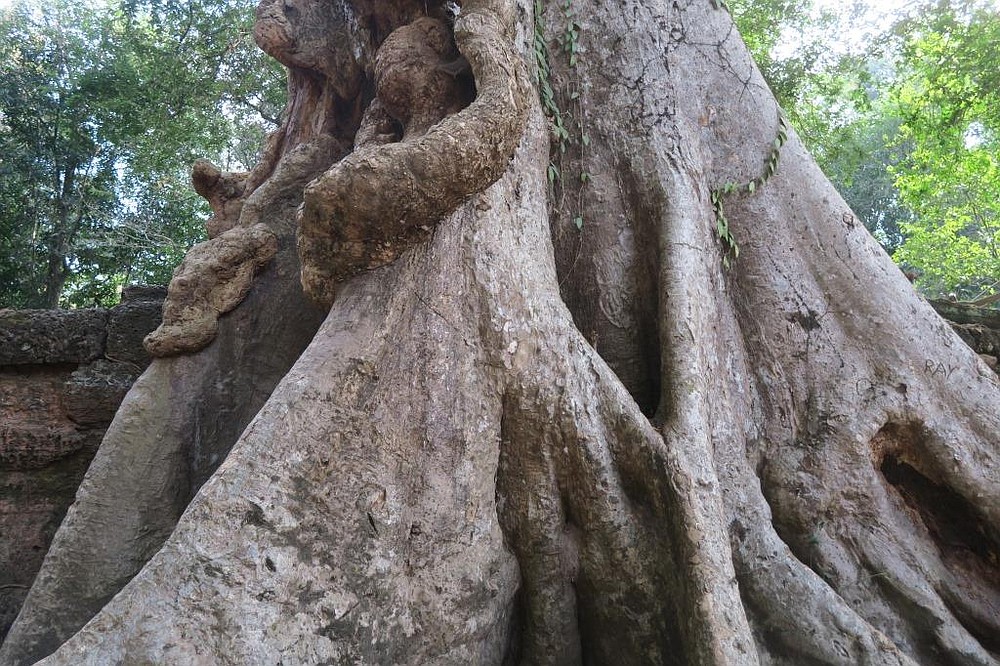 and the silk cotton tree, Ceiba pentandra. There were some strangler figs (ficus) but they were much smaller. 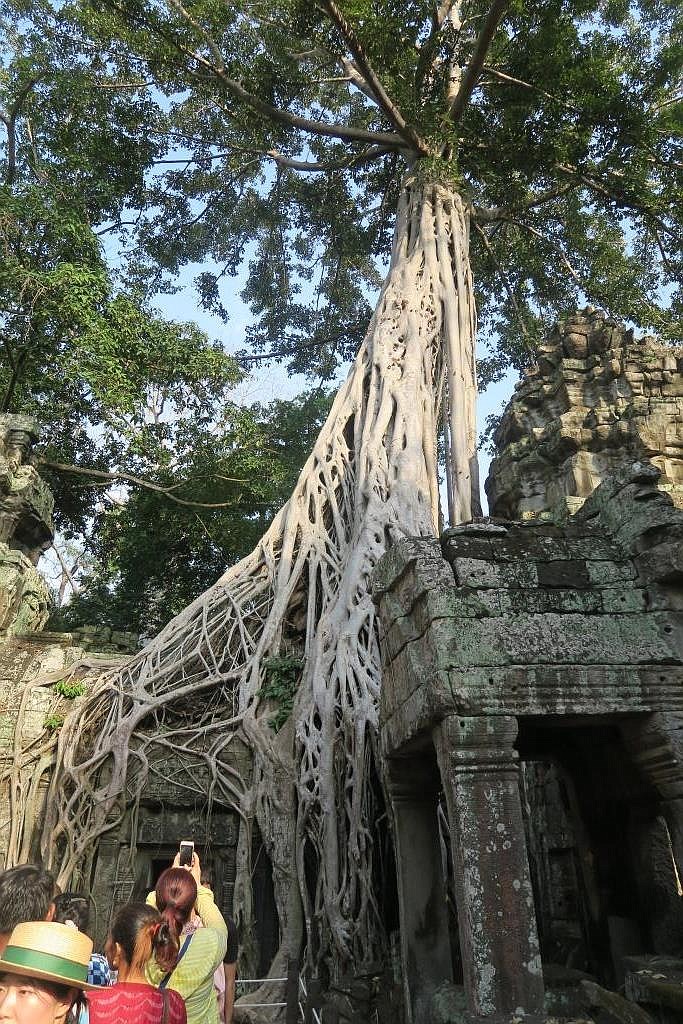 When we visited Siam Reap Cambodia, we toured several ruins of ancient Buddhist and Hindu temples. There are supposedly 50 old temples. The ruins in Siam Reap were abandoned after the fall of the Khmer empire in the 15th century, and neglected until the 20th Century. The jungle started taking over. With careful preservation and work, they are reclaiming many of the temples. At one of the temples, Ta Prohm, 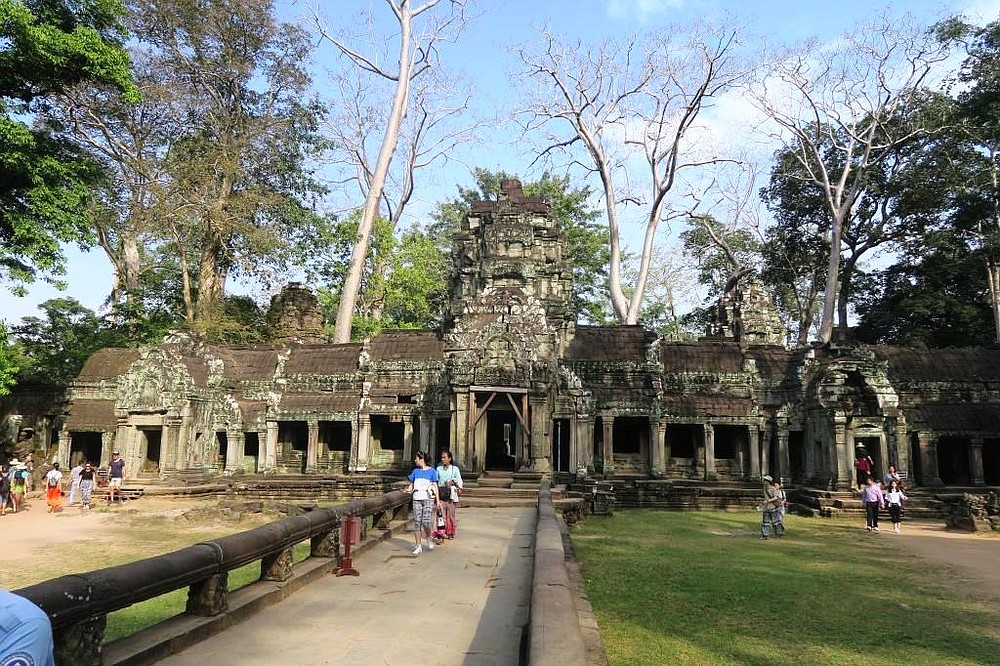 they have decided to let the trees have their way, to show tourists, just what these trees are capable of. It looks like something out of a horror movie—and in fact was the setting for the movie Tomb Raider—they didn’t have to create anything unusual for the set, they just let nature do it for them. 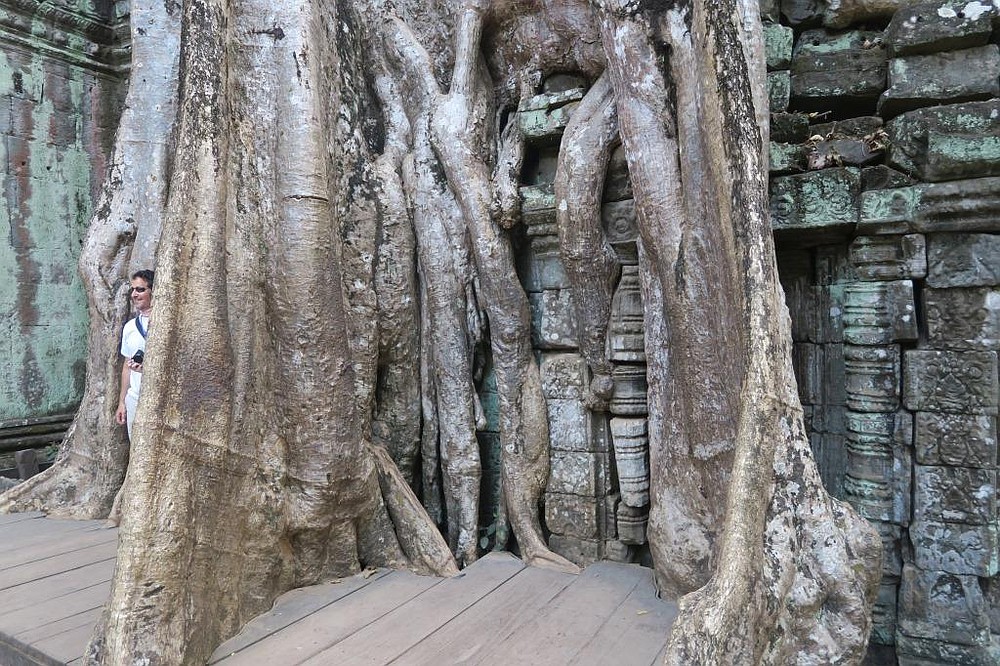 The massive roots look like they are a creature from outer space. 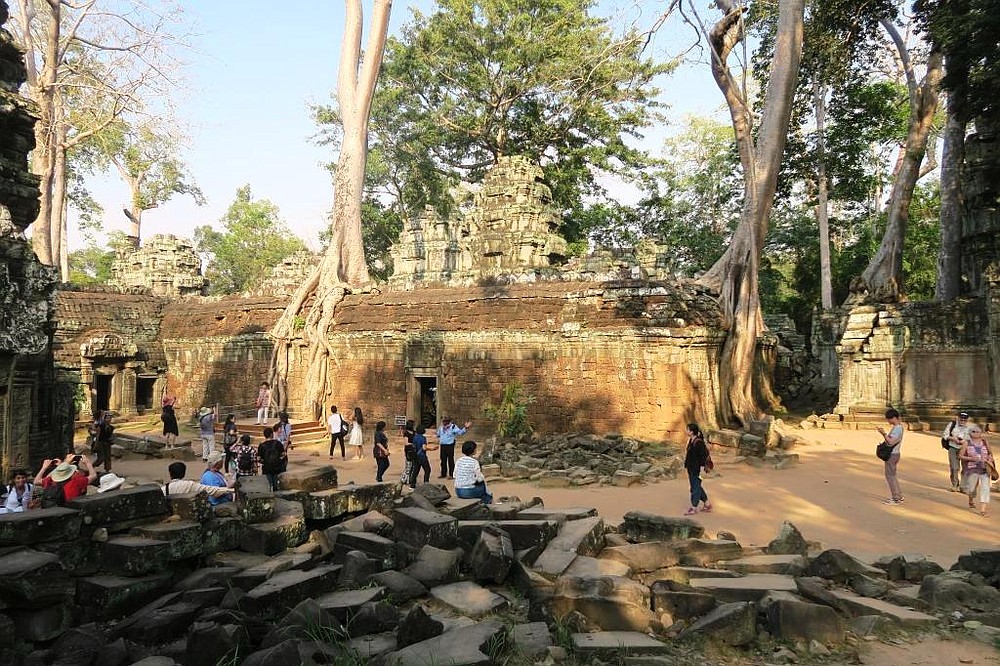 One reason the roots seem to be growing in and around the temple stones, is that the stones used to build the temples are made of sandstone which is porous in nature. 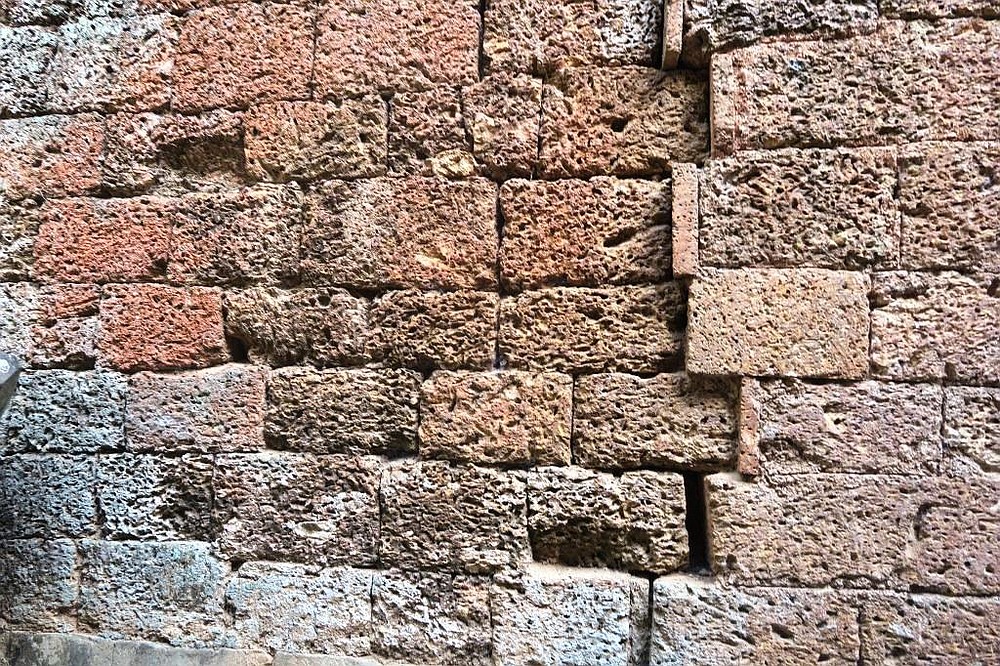 The roots are able to extract water from the stones.

I have heard strangler trees described at botanical boa constrictors, and that is an apt description. 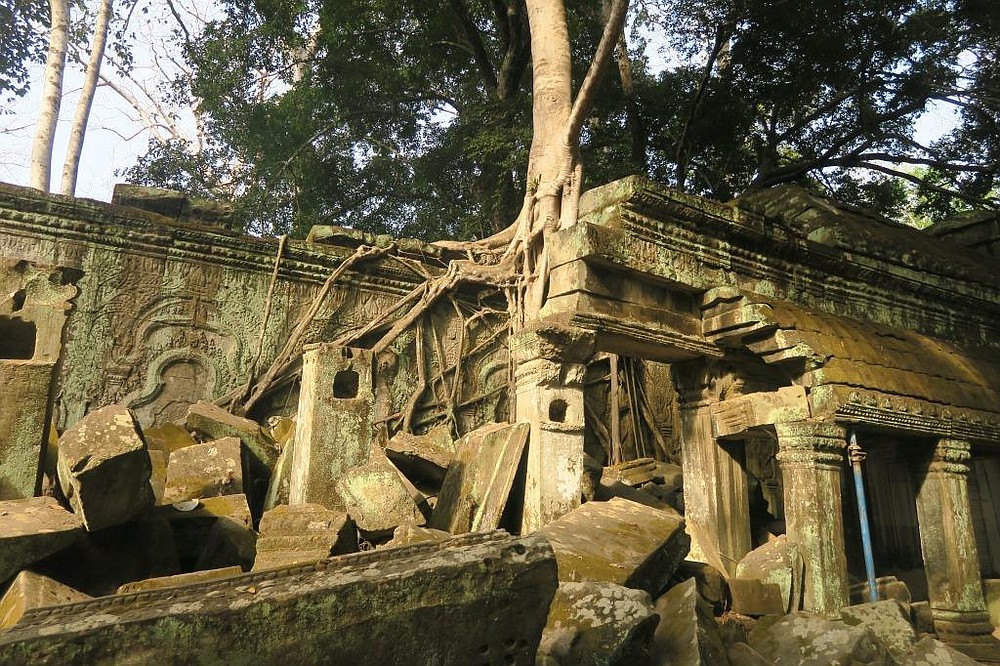 You will find strangler trees all over the world, from the Amazon rain forests, to Australia and New Zealand, the southern US and California, Hawaii, central and south America, and Asia. The most common genus is the Ficus, but there are several other species with the same growth habit. Depending on where the trees are growing, the common name will change. For the ficus genus there are common names including Banyan Tree, Strangler Fig, Moreton Bay Fig,

and more. There is a lot of religious connotation associated with them as well, particularly in the Buddhist and Hindu faiths.