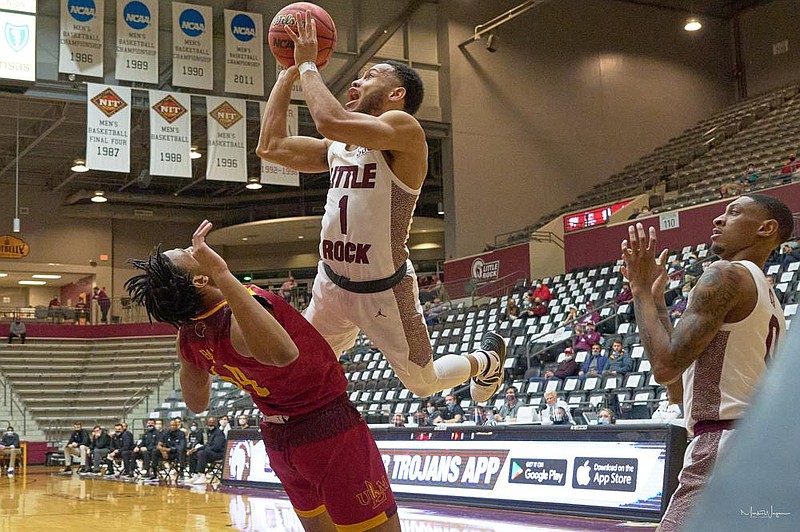 UALR’s Markquis Nowell (right, with the ball) puts up a shot Friday over a Louisiana-Monroe defender during the Trojans’ 66-62 victory overthe Warhawks at the Jack Stephens Center in Little Rock. Nowell finished with 17 points. (Photo courtesy UALR Athletics)

UALR squandered a halftime lead and trailed by seven points with 4:36 left to play Friday before a 13-2 run salvaged a 66-62 victory over Louisiana-Monroe.

Nikola Maric made a go-ahead hook shot with 19 seconds remaining, but it did little to soothe University of Arkansas at Little Rock Coach Darrell Walker.

"Overall, I'm not happy with this performance," he said. "We've got to get better. We got the 'W', which is good for us, but we have to get better."

The Trojans (9-7, 5-4 Sun Belt) overcame a sluggish second half behind 17 points apiece from Maric and Markquis Nowell to sneak past the Warhawks (4-12, 2-6) to open the weekend series. The teams will meet again at the Jack Stephens Center at 4 p.m. today.

UALR shot 21.7% from three-point range and turned the ball over 16 times during the latest in a series of low-output offensive performances. Ben Coupet Jr. finished with 12 points, and Ruot Monyyong posted 8 points and 9 rebounds.

The Trojans led 36-31 at the break, but eight points from Ozier in the opening minutes of the second half led a 13-4 Louisiana-Monroe run that put the Warhawks ahead 44-40 with 13:45 to play. They maintained that edge until Monyyong's foul-line jumper knotted the game at 60-60 with 1:15 left.

Maric put the Trojans ahead about a minute later, and Monyyong sealed the game at the free-throw line.

"This win says that we can do a lot more and a lot better," Maric said. "We are really good as a team and we can really be even better. But it feels good to win this game."

UALR scored 15 points off of turnovers and twice led by 11 in the first half. A 7-0 run powered by a Coupet three-pointer and free throws from Nowell gave the Trojans a 24-13 lead. Louisiana-Monroe punched back before the half when Josh Nicholas, who finished with 15 points, produced a 10-4 run to narrow the gap.

Walker lamented the offensive performance in which his team shot below its season-average of 47.6% from the field.

In both halves, Nowell came off the bench and provided the Trojans with a spark, scoring seven in the second half. The junior knocked down a pair of free throws in the final minute, and recorded an assist and a steal during the closing 13-2 run.

"It's great that I can go to the bench and bring Markquis off the bench because we're not scoring," Walker said. "He's capable of scoring the basketball. We all know that. We needed to score tonight."

The Red Wolves (6-8, 3-4 Sun Belt) finished the game by scoring the final nine points. Arkansas State overcame a 61-54 deficit in the final 3:45 of regulation to force the overtime. ASU took the lead for good on a layup by Norchad Omier with 2:13 left in the overtime. Eaton scored the next four points to give ASU an 80-75 cushion.

Omier finished with 15 points and 20 rebounds, 15 of which came on the defensive end.