Vaccinations continue; number in hospital down 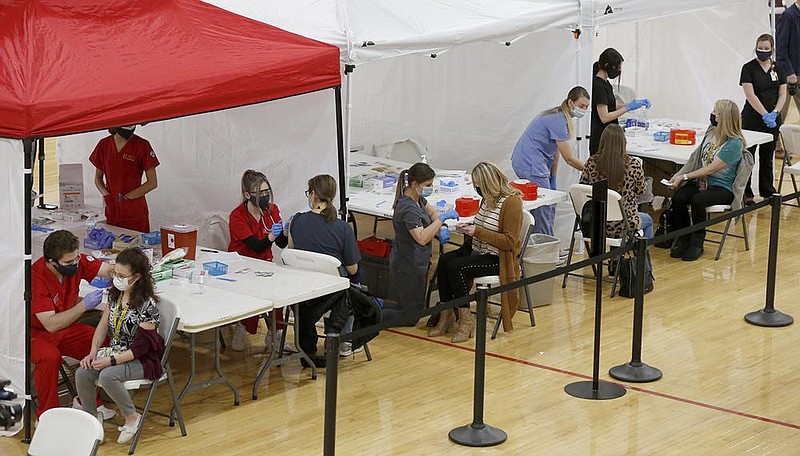 Covid-19 cases in Northwest Arkansas increased about 2,000 in the past week, according to the Arkansas Department of Health.

Pharmacies and hospitals continue to vaccinate nursing home residents and employees, health care workers, people 70 and older and school and day care employees against the disease.

More than 284,000 doses had been given in Arkansas as of Friday, according to the Health Department. The data includes first and second doses. Exactly how many vaccines have been given in Northwest Arkansas is unclear because the Health Department has only provided statewide data. A spokeswoman said last week the department is working on making county-level vaccine distribution data available.

Rogers vaccinated about 250 employees a week ago and has second doses planned for Feb. 11 for those who received their first doses but none for those who haven’t received a vaccine, according to Ashley Siwiec, spokeswoman. The district has 2,063 employees.

Bentonville planned to vaccinate an additional 100 employees Friday after initially vaccinating about 500 employees last week, according to Leslee Wright, spokesman for the district. The district has 2,364 employees.

Nearly 1,000 of Fayetteville Public Schools’ 1,463 employees have received the first dose of the vaccine, according to Alan Wilbourn, spokesman for the district.

Both the Moderna and the Pfizer vaccines approved for use by the federal government require two doses weeks apart.

Northwest Health System, which has five hospitals in the region, had given about 9,000 doses as of Thursday, according to Christina Bull. Mercy Health System has given 5,587 doses, according to Jennifer Cook, spokesoman. The data for each system includes first and second doses and includes people in Phases 1-A and 1-B.

The county had 1,438 active cases Friday including 957 confirmed and 481 probable cases.

Hospitals in Northwest Arkansas had a combined total of 79 patients in their covid-19 units as of Thursday, according to a joint statement from the region’s largest health care organizations via Martine Pollard, spokeswoman for Mercy Health System. Hospitalizations in the region have decreased over the past few weeks after reaching a record for most covid-19 patients at one time Jan. 8 with 140 patients.

Both antigen tests and polymerase chain reaction, or PCR tests are used to test for covid-19.

Antigen tests produce faster results, are generally only used on people with symptoms of the virus and have a higher chance of giving false-negative results. Antigen and most PCR tests are done via nasal swabs.

Groups of residents in Phase 1-B who aren’t yet be eligible to receive the vaccine include food and agricultural workers, manufacturing workers, public transportation workers, U.S. Postal Service workers and essential government workers. The state has estimated those groups will be able to begin getting the vaccine in February.