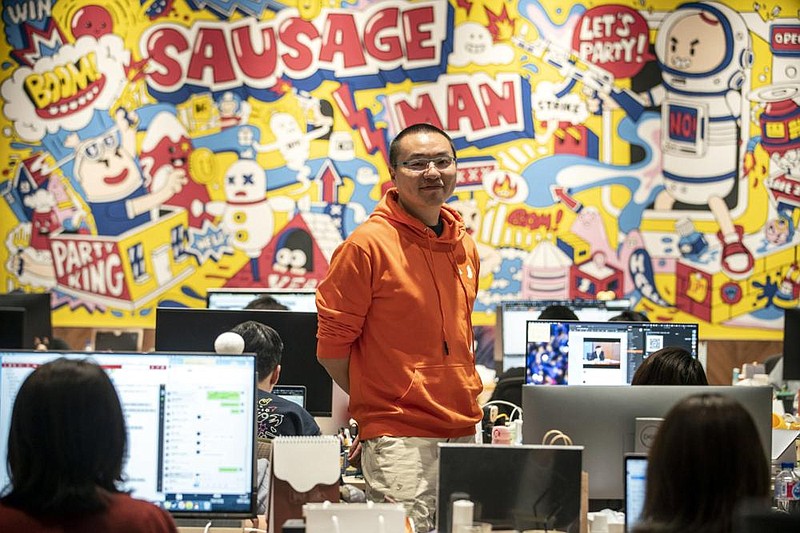 When China's two big mobile powers clashed publicly on New Year's Eve, the stock of a little-known gaming company surged the most ever, minting a new billionaire in 38-year-old maverick entrepreneur Huang Yimeng.

Shares in his independent game distributor XD rose 24% on the first trading day of 2021 after Huawei Technologies temporarily removed all Tencent Holdings games from its app store in a dispute over their revenue split. Investors flocked to the ByteDance-backed creator of TapTap -- a Steam-like download service for games that bypasses the dominant app stores -- on the sign of the schism between China's big two.

The rare incident brought to the fore simmering resentment against the 50% cut that app stores like Huawei's charge developers and highlighted the key attraction of TapTap: it is ad-supported and thus free to use for players and publishers.

Now Huang, inspired by Epic Games' fight against Alphabet's Google and Apple's platform fees, hopes to ride that upswell of rebellion and challenge the status quo in the $30 billion Chinese mobile games arena.

Already counting blockbuster hits like Genshin Impact on its platform, XD is working to lure more developers disillusioned with the tight grip on game development and distribution enjoyed by Tencent and hardware vendors like Huawei and Xiaomi, which make their app stores the default on every phone they sell.

"More and more creators will come out and say 'no' to traditional distribution channels because they don't need to pay them for selling good content," the 6-foot, 1-inch XD co-founder and chief executive officer said in an interview. "The danger of companies using hardware to trap users inside their ecosystems is something we should be looking at from an anti-monopoly standpoint."

Huang isn't all talk. One of 2020's biggest mobile hits, Pascal's Wager, picked TapTap as its exclusive Android distribution partner in China. The thematically dark action role-player, created by Giant Network Group unit TipWorks, has sold more than 1.05 million copies globally, according to the studio's founder Yang Yang. TapTap generated half of those sales and the rest came from the iOS App Store and Google Play, said Yang, who first showcased the game during Apple's iPhone 11 event in 2019.

"The timing was perfect in that our game met with TapTap's rapid growth," Yang said. "If someone wants to work with you without even making money, that means they really care about your product. Their way of game publishing is disruptive."

TapTap's rise is aided by a growing -- and global -- government and consumer backlash against the handful of mobile giants that control the app economy. It coincides with a Chinese crackdown intended to rein in its most powerful internet corporations from Tencent to Alibaba Group Holding. Regulators have yet to address gaming platforms, but the 50% rule set by Chinese Android stores -- which makes Apple and Google's 30% levies look like a bargain -- is fueling discontent among game studios, big and small.

For months, Tencent had sought a bigger cut of sales through Huawei's app store in marquee titles like Honor of Kings, but the two companies failed to agree on a deal, according to a person with knowledge of the matter. On Dec. 31, Huawei removed Tencent games from its app store only to restore them hours later. Tencent said the next day that the two sides had reached an agreement, without providing details.

Against that backdrop, TapTap users grew 52% in the first half of last year. XD's stock has risen roughly 470% since listing in Hong Kong at the end of 2019, pushing its market capitalization north of $3.7 billion and the value of Huang's 35% stake to about $1.3 billion.

XD is one of the few up-and-comers in China's games industry that hasn't relied on Tencent's patronage. It's attracted powerful backers like ByteDance -- the Tencent nemesis behind TikTok and Douyin that's developing its own interest in gaming -- as cornerstone investors for its initial public offering. Fellow Shanghai startups Lilith Games and Genshin creator miHoYo are also among its investors, though Huang and his co-founders maintain the controlling stakes and voting rights. That's helped TapTap become a more neutral platform, where gamers look for both Tencent blockbusters and independent tiles.

The CEO's path was as unlikely as that of his company. Huang's first entrepreneurial effort got him kicked out of college.

A former semi-pro basketball player, his first business was a peer-to-peer download network called VeryCD that was quickly overrun with pirated content. In 2003, a sex tape circulating on the network that had been recorded on Huang's university campus drew the ire of its governors, leading to his dismissal after refusing to remove the clip. He told his school back then that online platforms shouldn't be responsible for policing content.

"I didn't regret my decision," he said. "I'm lucky I left school early so I got more time to work on my website."

Huang found more success in making web games, enticing fans to splurge on weapons and power-ups for their warriors and sorcerers. As China's internet use shifted from desktop to mobile, he realized there wasn't a Steam-style community dedicated to smartphone gamers. TapTap was born in 2016 and has been free to use from the outset.

Outside of China, Fortnite maker Epic Games launched its PC games store in 2018 to challenge Steam by offering a 12% revenue split with developers rather than 30%. XD's strategy mirrors Epic's: its in-house games attract users to the store and the store lends more exposure to its games.

For now, Huang's company still generates the bulk of revenue from selling virtual items in games it develops or publishes. Ad sales through TapTap accounted for less than a fifth of XD's $205 million revenue in the first six months of 2020. Huang expects TapTap to contribute a larger proportion as the platform continues to increase ad slots.

"It's about time for Huawei and its peers to make changes," said Chundi Zhang, a gaming analyst with Ampere Analysis. "But if the big guys do cut their fees, it will be TapTap's turn to be threatened. This is a game of checks and balances."