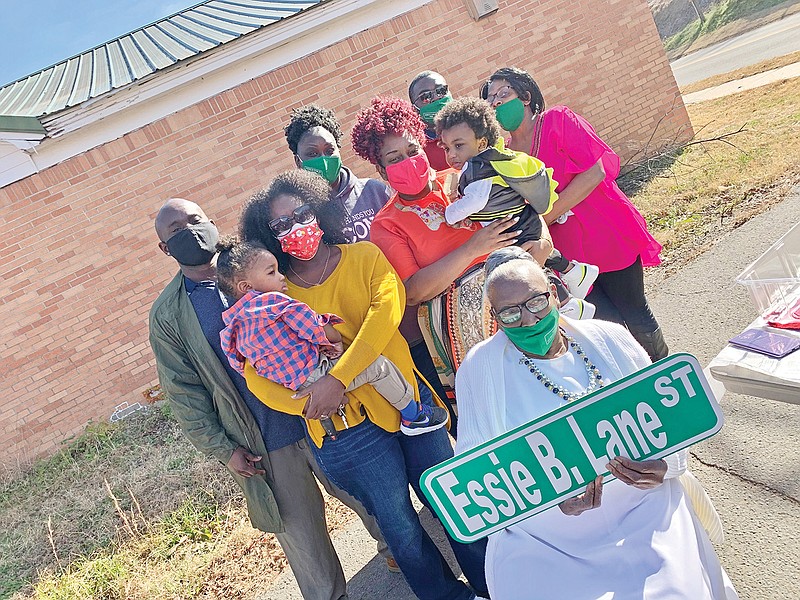 Diane Brown said she was sitting on the porch of her mother’s house, observing changes in the neighborhood, when she decided the street name should be changed, too.

She said the neighborhood looked like it should. To her left lived a family of four, and in front of her was a yellow house that signified change. Rental houses had become homes filled with love, she said.

“Works have spoken,” Brown said she thought as she remembered what Lane Street once was: a drug-ridden neighborhood known for trouble, with police cars patrolling the streets regularly.

Brown said she believes the street’s residents wouldn’t have experienced these changes without her mother, Essie Acklin, who raised Brown and her nine siblings there, but Acklin wasn’t just raising her children. Brown said Acklin was also helping the youths who were sucked into the life of drug dealing.

“If she saw the young men outside their home, that became her opportunity,” Brown said. “She would boldly walk across the street and talk with them about salvation. She always talked kindly to them; she expressed God’s love and encouraged them to do better. Always, before she left their presence, she would ask if she could pray with them, and they would usually allow her to do so.”

Brown recalled how the street had changed as a result of her mother’s bravery and said it was only fitting to honor Acklin by naming the street after her.

With consultation from Mayor Allen Lipsmeyer and encouragement from her daughter, Brown sought to petition the neighborhood for support of her idea of naming the street after her mother. In October, the Morrilton City Council approved the street-name change to Essie B. Lane Street.

On Dec. 22, neighbors, family and friends honored Acklin and her work to improve the neighborhood with a sign reveal and a celebration to officially change the street’s name.

“It’s all about her (Acklin),” Wilson said. “I’m excited that we have a connection that made that day even more special because I got to represent our family and our city at the same time.”

During the celebration, Acklin was surprised by a visit from her pastor, Bishop Frank Anderson Jr. of New Zion Temple Church of God in Christ in Conway. Since the coronavirus pandemic began, Acklin’s favorite activity of going to church had been put on pause, she said.

Acklin, with her family and pastor together, said during the celebration that she wished she could go to church.

“I’m taking you to church today,” Wilson whispered in Acklin’s ear, and sang the hymn, “I Want Jesus to Walk With Me,” and everyone joined in on the singing.

“When she mentioned that she wanted to go to church, in my mind, I thought we had to take her to church,” Wilson said. “[Then I thought], we’re here. Let’s give her a little bit of what she’s been missing.”

Brown’s hope to celebrate the street-name change was for her mother to see what an impact she had made in the neighborhood and the community, although changing the community was never Acklin’s goal — her goal was to change its residents’ hearts.

“I just kept trying to talk to them,” said Acklin, who is now 91. “A lot of them were drug addicts, and I wanted them to live better lives. … I wanted them to stop living the lives they were living and to see people saved.”

Acklin, a retired evangelist who had opened the Powerhouse Church of God and Christ ministry, made it her mission to help the youths in the neighborhood.

“She was really bold,” Brown said. “Her mission was to save lives, and that’s what she focused on.”

Acklin said that at one point, she was invited into a neighbor’s home and saw marijuana plants growing inside the home, yet her reaction wasn’t fear.

“I just wanted to help them more,” Acklin said.

“We, as her children — we were always warning her not to be going over there because she didn’t know these people, and anything could happen,” Brown said. “But she felt like she was on a mission and doing her work for God. And she was. For her safety, we tried to stop her, but she was not wanting to do so. She continued, and the young men never bothered her.”

Acklin was often met with rejection, however, from youths who did not want to accept her mission. Acklin said she got on a first-name basis with her neighbors and continued to show kindness, whether they listened or not. When she saw the youths across the street, she said, she would wave to them and pray for them.

“She developed a relationship with them,” Brown said. “I do believe that, because she never had a problem with them. So she’d go across the street by herself, and they learned to respect her.”

Acklin’s works to change hearts were also accomplished through her love of gardening. She worked to beautify the neighborhood with her small vegetable and flower garden.

Acklin sometimes struggles with her memory and may not recognize the true impact she’s had on the community, Brown said.

“Mom talks about how they wouldn’t listen. You may never hear it, but I do believe some of those lives were changed,” Brown said. “They probably remember the good old lady who used to come over and pray and talk to them about God. I’m sure their lives were changed. … She got her roses, whether she 100 percent understands it or not. She did a lot of work to help make the changes in this neighborhood by being brave enough to go talk to them.”

“She was going to do her part,” Brown said. “Once she did that, I think she didn’t know it would go further. … Mom’s goal was to bring lives to Christ. She didn’t really see beyond that.”