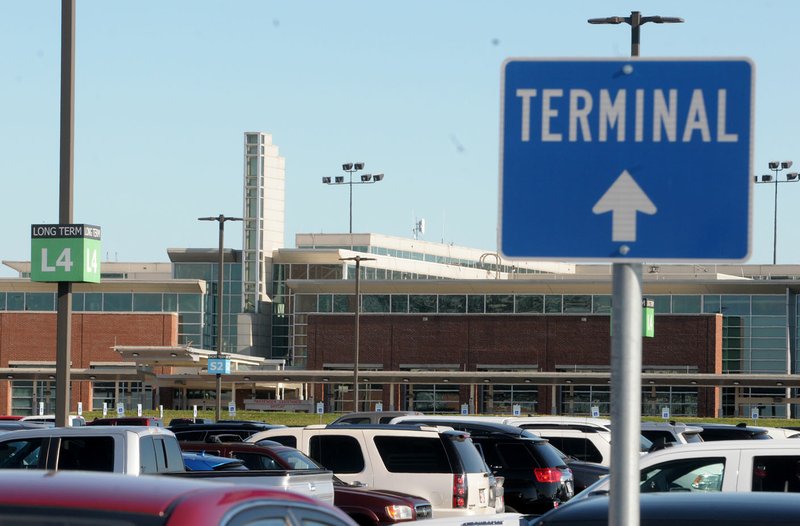 NWA Democrat-Gazette/DAVID GOTTSCHALK The terminal and front entrance is visible Friday, June 22, 2018, at the Northwest Arkansas Regioinal Airport in Highfill.

The proposed access road to the Northwest Arkansas National Airport shouldn't significantly affect threatened or endangered species or environmentally sensitive areas if it's built in a direct line from the Springdale Northern Bypass and Arkansas 112 interchange, according to an environmental assessment study.

The Arkansas Department of Transportation wants a new four-lane, limited access road to the airport because it provides the most direct and reliable route. The proposed road reduces the likelihood of congestion, accidents or extreme weather events interfering with people getting to and from the airport, according to the Transportation Department study.

Aaron Burkes, executive director of Northwest National, said he's excited to be nearing the finish line on the environmental approval.

"We are very pleased with the finding that a new, direct road connecting the Springdale Northern Bypass with the airport is the preferred alternative. This will be the fastest and safest route to connect our passengers to the airport," Burkes said.

Highway officials say they expect to have a public input session to talk about the study and project soon.

The environmental assessment was a huge hurdle, but the project still has challenges.

Transportation Department officials will decide if there are any significant problems with the proposed route after a public input session and review of comments from residents, public officials and public entities.

The proposed route could go to the Federal Highway Administration for approval later this year.

Philip Taldo, an airport board member and member of the Arkansas Highway Commission, said getting an access road has been a long and complicated process for a number of reasons, one being the number of federal, state and local agencies involved that all want to have input.

"It's been a long time coming, but it seems like the stars are aligned at this point, and we're going to get to move it forward," Taldo said. "I think that if everything goes in the future like they're talking about -- in 2045 having double the population -- it's going to be a much needed addition. You can't judge it by just what the traffic is today. Ten or 15 years down the road, it's going to be a lot heavier."

Projections earlier this year by the Arkansas Economic Development Institute at the University of Arkansas at Little Rock predicted 974,275 residents in Benton and Washington counties in 25 years. Benton County is projected to have 545,893 and Washington County 428,382. The current population for the two counties is estimated to be 531,000.

Airport officials wanted a new road to the airport from the beginning. The alternate routes came into play because the Federal Highway Administration, federal wildlife officials and the state Transportation Department, which all have to sign off on the road, require all reasonable alternatives to be explored before a project is considered.

The route preferred in the study would be 4.6 miles long and have no entrance or exit ramps between the beginning and end. Almost 242 acres of right of way would be required. Construction is estimated to cost $79.7 million and right of way acquisition another $5.8 million for a total of $85.6 million.

That compares to a total estimated cost of $66.7 million for a partial new route and $57.1 million to improve roads.

The state Department of Transportation is expected to design, build and pay for the project as part of the highway improvement program approved by voters in November. The airport also has about $14 million in federal money earmarked for the road.

Two residences and three businesses would likely have to be moved for the road, according to the study.

The route would impact 3.3 acres of wetland and 6,509 linear feet of streams where bridges will cross. The route would go through 15.6 acres of 100-year floodplain, but with minimal impact, according to the report.

The route is close to two karst springs, which are suitable habitat for endangered Ozark cave fish, and 75.5 acres of suitable bat habitat, including 11 suitable roosting structures. About 11 acres of prime farmland could be impacted.

Dye tracing done by Ozark Underground Laboratory identified threatened and endangered species habitat slightly outside the project's scope and the potential exists for other similar habitat to be found in the area, according to the study.

Should a cave be found during construction, it will be secured to prevent entry and the U.S. Fish and Wildlife Service will be contacted to determine proper procedures to be followed and to determine whether any endangered species live in the cave. Stream and wetland mitigation will also be done.

Road to a connection

The plan was for the Northwest Arkansas National Airport Authority to build and pay for a “long driveway” to the airport from Arkansas 612 at Elm Springs. That plan was shelved in favor of working with the state on a road that’ll likely end up being a state highway. The Arkansas Department of Transportation in June 2019 offered to do the environmental assessment, get the necessary approvals, design and build the road. Airport officials accepted the offer, saying it will speed the process of getting the road done. An improved connection to get from Interstate 49 to XNA has been identified as a priority project of regional significance for more than 20 years and is part of the region’s 2040 Metropolitan Transportation Plan. 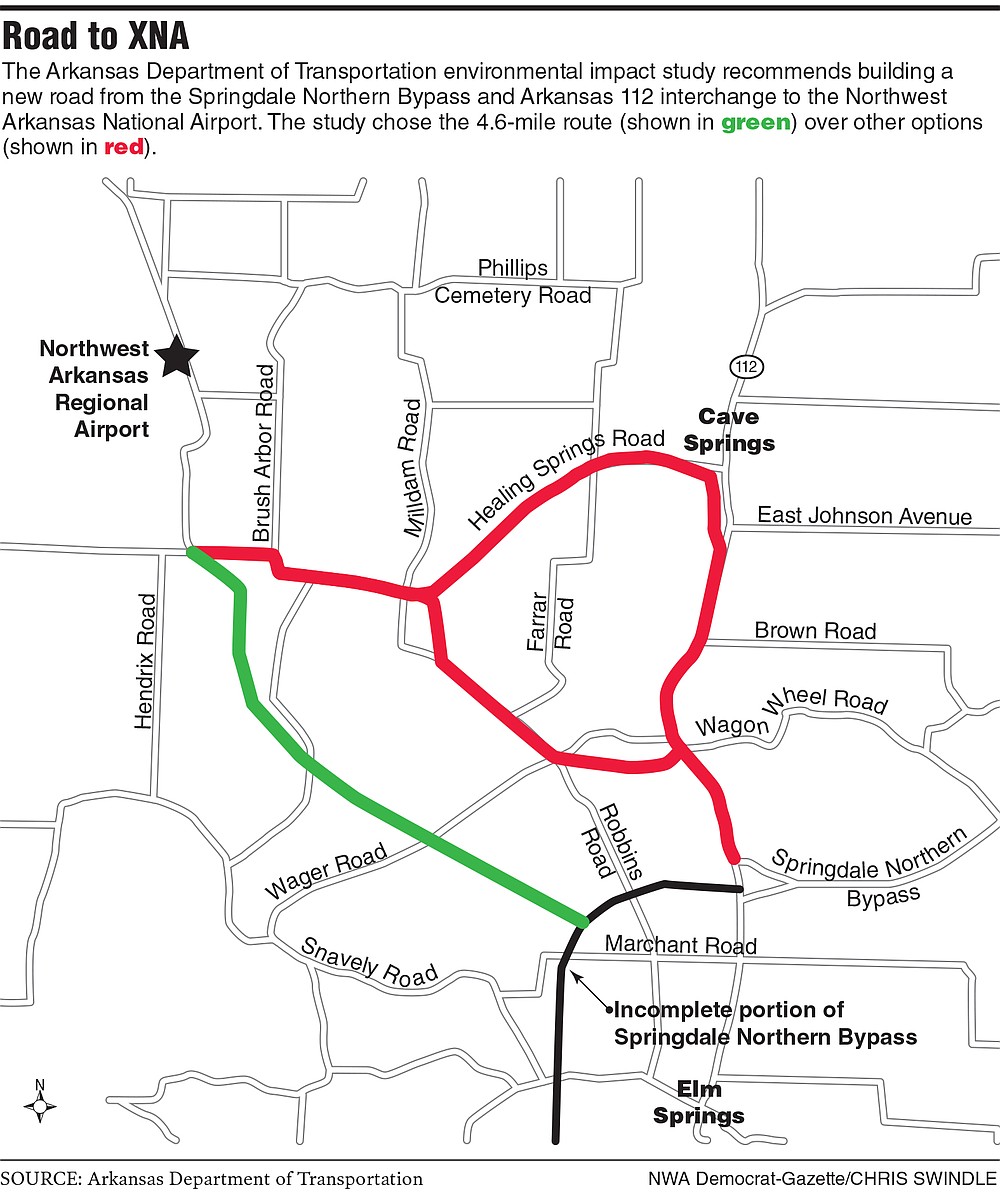