June case preceded state’s decision to review use of controls at care centers by Kat Stromquist | January 31, 2021 at 4:42 a.m.

Labels on a cabinet in a ward at a psychiatric hospital in Lakewood, Wash., read "flashlights" and "restraints" in this Nov. 18, 2015, file photo.

A man who lived at an Arkansas-run center for people with developmental disabilities died last summer after three staff members restrained him, just a few months before state officials pledged to review physical restraint use at the sites.

The resident died June 13 after having a medical emergency while restrained by Booneville Human Development Center staff members, according to documents that the newspaper obtained under Arkansas' public records law.

He'd been "brought to the ground" as workers grabbed his arms and then "began holding" his legs, a report from a watchdog group to state officials said. The staff noticed he wasn't breathing "approximately one minute" after he was restrained.

The man, 42, died at a hospital about an hour after the restraint incident began, files show.

His death, not revealed in news reports until now, provides new context for the state's Division of Developmental Disabilities Services' promise in September to review the use of physical restraints and restraint devices in its five human development centers. The devices include padded boards, restraining chairs and wrist wraps.

Committees at work on the policies are scheduled to meet again Feb. 11. Thus far, the state plans to bring in a consultant to observe and interview staff members, begin more robust data tracking, add camera coverage across the facilities and take other steps, the division's director Melissa Stone said in an interview.

Stone stopped short of saying the death was a "trigger" for the review, while explaining that she did not want to downplay the event. The state was influenced by a restraint data assessment that officials undertook during pandemic lockdowns to see if the isolation affected residents.

"Those numbers were high," she said. "We need to reengage ourselves in this."

The review was made public last fall as the Arkansas Democrat-Gazette reported on an apparent pattern of harmful restraint use at two of five centers housing hundreds of people with intellectual and other disabilities. Among them were incidents at the Booneville site in 2019 that broke one resident's arm and caused another to faint when he was placed in a "choke hold," records show.

Records detailing the 42-year-old man's death last summer raise fresh questions about how Arkansas investigates restraint incidents that hurt people in the care centers. Some of those people cannot speak or walk, and many don't have family members who visit or advocate for them, current and former employees say.

In an Oct. 22 report sent to Stone, a Disability Rights Arkansas attorney and advocate described the man's death and offered what amounted to a scathing critique of the state's response. The group is a federally-designated monitor and advocate for people with disabilities.

Writing from medical records, interviews and state files, the seven-page report alleges that first responders and a physician weren't informed that the man was physically restrained, and were instead told that he "was found in the hallway" and had "choked on his lunch" before he was pronounced dead at Mercy Hospital-Booneville.

The man's mother did not learn that he was restrained by the staff until nine days after his death -- "too late for them to request an autopsy," the report said.

Stone responded to the Disability Rights Arkansas report on Nov. 13 with a three-page written proposal to form new committees to "inform restraint practices" used for human development center clients. Her response "isn't intended to argue with your report or point out discrepancies," she wrote to advocates.

In an interview this month, she said cameras in the facility -- the Booneville site had none -- would have helped make the situation "black and white" to her.

Disability Rights Arkansas director Tom Masseau wrote in an Oct. 23 email to Stone that the state's initial probe, which did not lead to any findings of wrongdoing by the staff, was "unacceptable." The man's death was a "tragedy that arose from a dangerous and barbaric practice and never should have occurred," he wrote.

State employees who first looked into the death were not asking "the tough questions. ... Your reports are only as good as the person conducting the investigation," he later told the newspaper.

"You want to know what events led to [a death], and what could be done to prevent it."

An ongoing investigation by the newspaper has shed light on problems at the state-run human development center sites, as well as restraint issues. Records show:

• An "unsupervised" resident, prescribed a "pureed" diet, died after choking on cake.

More than 800 people live at the centers. Many have behavioral health or other health issues in addition to developmental disabilities, and facility workers say it's not unusual for clients to remain in the centers for years.

Generally, the care system for Arkansans with disabilities appears "woefully behind" other states, University of Minnesota Institute on Community Integration Director Amy Hewitt has said. She said many other states have entirely phased out their large institutions that offer "less choice and autonomy and self-determination."

The newspaper has identified the man who died after being restrained last summer, but is not naming him in this article because a family member declined to comment on the record about the incident. An attorney for the family also declined to comment.

After lunch the day he died, the man "headed to the common area kicking, yelling and biting," according to a Sept. 24 report from a state Department of Human Services committee that reviews all deaths of human development center residents. Three staff members restrained him for "safety," so he was "lying on the floor on [redacted] left side," the report said.

He suddenly started throwing up "and turning cyanotic," meaning his skin became blueish from lack of oxygen, documents show.

A report describes the man's transport via ambulance to the small hospital where he died. Committee members wrote at the time of their report that his official cause of death was "currently unknown," and determined that the "standard of care" was met by the staff.

The man's obituary describes him as a 13-year resident of the Booneville Human Development Center. He loved singing to the Monkees band, taking trips to Walmart and KFC, and participating in the Special Olympics. He graduated from a Pope County high school.

A Logan County deputy coroner listed the man's cause of death as "respiratory arrest" because of "food aspiration, cardiac arrest" in a June 13 report.

The coroner's report does not mention restraints.

No staff members were disciplined or terminated in the June incident because "there was no finding of inappropriate use of a personal hold/restraint" and life-saving measures were implemented, Stone said in a written statement last week.

She said she cannot "speak to or verify" what information was provided to first responders, but social services staff members who first notified the man's family have "limited information" about incidents, which could have happened just moments before.

Potential changes in investigative practices in the centers are on the table as part of the policy review.

Their eventual goal, state officials say, is to eliminate restraint use at the centers. Interim plans include modernizing outdated cameras at four centers and installing cameras at the Booneville facility for the first time, in part to deter "bad actors," Stone said.

The overhaul also is likely to remove mentions of restraints as strategies in individual care plans and further train the staff to lessen reliance on restraints as a behavioral tool.

Masseau, the advocate, has worked closely with the state on the changes and said he felt encouraged by the direction of the review. One likely change will allow human development center staffs to call 911 in medical emergencies without seeking approval from administrators, shaving off crucial moments of response time.

"There has to be a huge cultural shift," he said. "If there is buy-in from the [administrators], but it doesn't get down to staff, it's not going to do any good."

This is not the first time Arkansas has tried to change restraint usage in its human development centers. A plan aiming to reduce restraints is updated annually, Stone said in September.

In 2016, Disability Rights Arkansas published a report claiming "excessive" restraint use at the Booneville Human Development Center, which advocates said put residents and the staff at risk. Residents "sustained injuries ranging from scrapes and scratches to large, multiple bruises and even broken bones," the group wrote at the time.

Later that year, the state announced further training on restraint usage for staffs and banned the use of an isolation room at the Booneville facility, according to previous reports. An outside consultant also worked on that review, but did not make site visits or speak in depth with the staff, as is planned this year, Stone said.

The state's latest moves to change its practices arise as restraint use in care settings draws attention nationwide. Michigan health regulators announced a ban of several types of restraints in July after a Black teenager had a heart attack while being restrained at a Kalamazoo care center and died, reports said.

Guy Stephens, director of the Maryland-based group Alliance Against Seclusion and Restraint, says restraint use is a civil rights issue that's most likely to impact people with disabilities and people of color.

Research shows that being restrained can make behavior problems worse, he says, by triggering brain activity and trauma that make people more likely to lash out in the future.

More often than not, he added, the interventions are not being used "for life-or-death danger, but rather for situations of noncompliance, disrespect."

In July 2018, Arkansas inspectors cited the Arkadelphia facility when staff members placed two residents in restraints for "staff convenience" when the residents refused to go to work.

They were then "forcibly" taken to a job site, an Office of Long Term Care inspection report said. 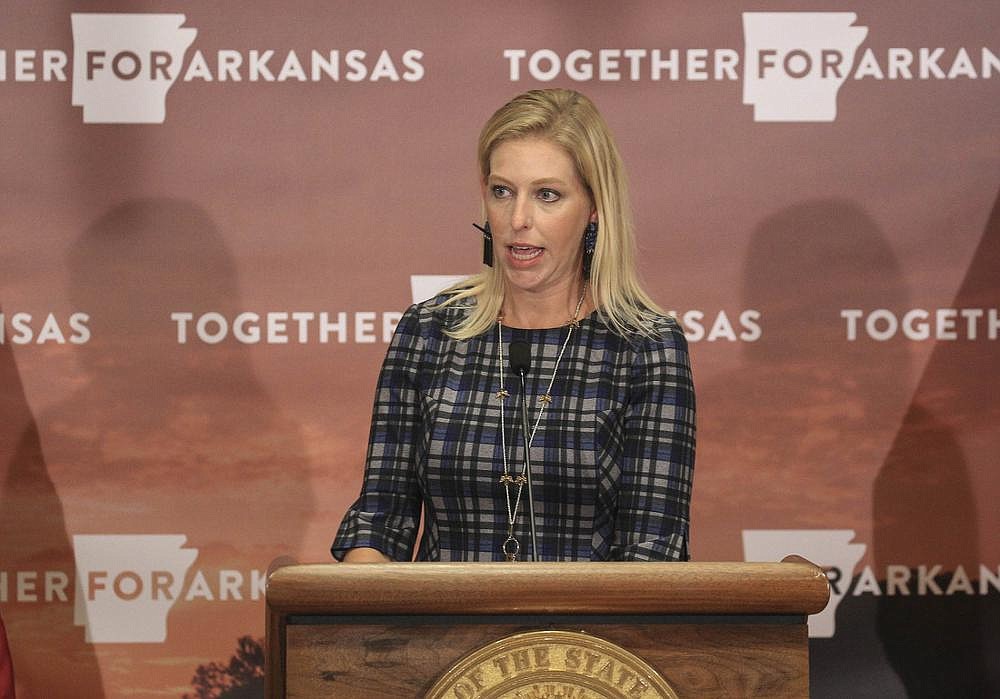 Melissa Stone, director of the Division of Developmental Disabilities services at DHS, speaks Thursday August 27, 2020 in Little Rock during a press conference at the state Capitol to announce that DHS is moving 700 families off the wait list for disabilities services. (Arkansas Democrat-Gazette/Staton Breidenthal) 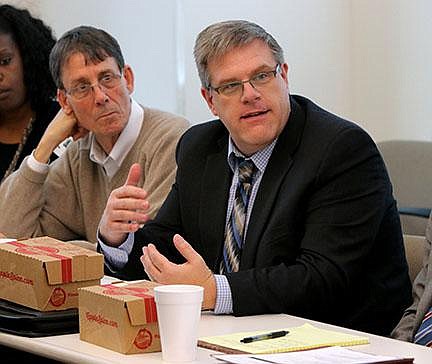 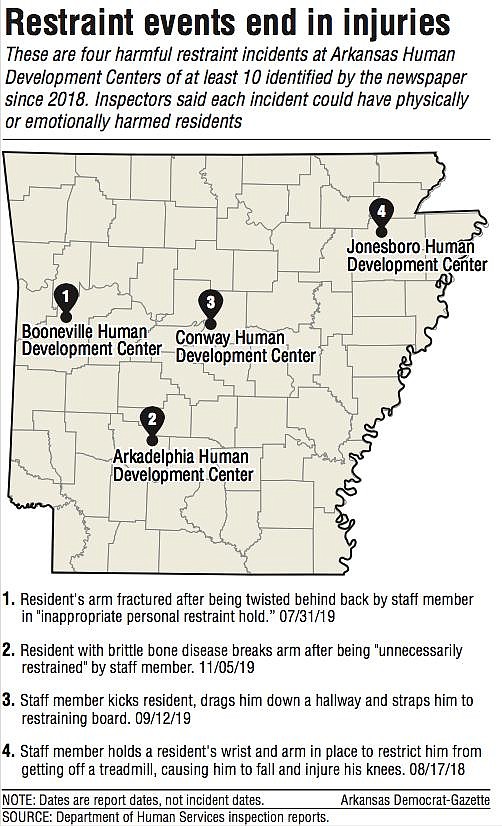