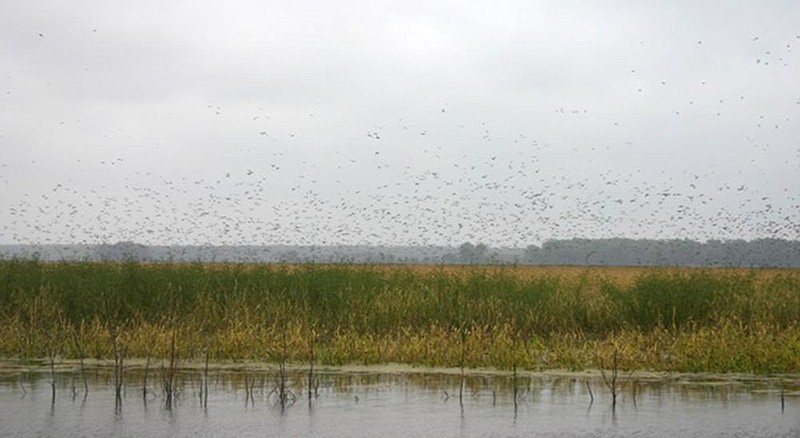 Scenes like this were once common in Arkansas, but they have been rare in recent years as ducks adapted their feeding and loafing habits in response to intensive hunting pressure and lack of food. (Arkansas Democrat-Gazette/Bryan Hendricks)

Duck season ends this evening, and many duck hunters wonder what went wrong.

According to the U.S. Fish and Wildlife Service, duck populations are very good, but ducks never arrived in great numbers to Arkansas. Stan Jones of Alicia, a member of the Arkansas Game and Fish Commission and owner of Stan Jones Mallard Lodge, owns some of the best duck habitat in northeast Arkansas. His properties are textbook examples of proper management, but Jones said ducks have been scarce.

From Jan. 23-29, the parking areas in the Long Bell area of Bayou Meto Wildlife Management Area were deserted. A friend who took off work to hunt the last week at the Government Cypress Walk-In Hunting Area said there was hardly any shooting, even on blue-sky days with a steady north wind. On Tuesday, he said he killed two mallards and a wood duck, which he considered outstanding. He said no ducks flew until 9 a.m., and that they stopped flying at about 10:30 a.m. His best situation occurred when nine mallards landed around him while he put out decoys.

Several people reported one good shoot followed by subsequent days with no ducks in the same places. That is consistent with ongoing observations from Luke Naylor, the waterfowl program coordinator for the Arkansas Game and Fish Commission. For several seasons, Naylor has noted in the commission’s weekly waterfowl report that ducks are congregating in unhunted, often unmanaged areas. They go where people are not.

“Flooded fields, for example, were often devoid of ducks during this survey [Jan. 17-20], while purposeful sanctuary habitat or simply lightly hunted, harder-to-reach areas supported noticeable concentrations of ducks,” Naylor said in the Jan. 27 report. “Odd areas dominated by moist-soil plants appeared to host lots of ducks, including the nearly 27 percent of all mallards observed in this habitat type. Observers noted over 31 percent of mallards in oxbow lakes, buttonbush [buckbrush] habitat and agricultural reservoirs. Many of these areas showed little evidence of hunting activity and were off the beaten path.”

It is undeniable that a lot fewer ducks are spending winters in Arkansas. The AGFC’s first 2021 waterfowl survey, conducted Jan. 4-7, revealed that the Delta mallard population estimate was the second lowest since formal surveys began in 2009-10. The long-term mallard average is 826,000. Only 45% of that number was present Jan. 4-7.

The number of mallards in the final survey was still 200,000 shy of the long-term average. Tellingly, the report said that number was “in line with late-January mallard counts in recent years.”

Also, the report noted that “mallards typically account for 59% of all ducks during the late January count, but this year made up 44% of all ducks.”

Could it be that Arkansas duck hunters are living in the past?

Wes McNulty farms rice and soybeans in Jefferson County. Though his property isn’t on the Grand Prairie, it traditionally attracted a lot of ducks. McNulty also keeps some acreage in reserve for ducks in addition to his woodland habitat. He said it is obvious fewer ducks migrate into the area, and his harvest numbers reinforce the point.

It’s not for lack of effort. McNulty’s college-age son hunts a lot, and he often brings friends. McNulty said that changes in rice harvesting are a major factor. There is far less rice in the fields when ducks arrive than there used to be. If food is consistently scarce, it stands to reason that the landscape will attract fewer ducks.

“I think there’s several things,” McNulty said. “It seems like pintails come down a lot later than used to. I always thought that pintails relied heavily on rice, but there’s not as much rice as we used to have, but we’ve still got the same amount of acres flooded. People say nobody’s flooding their fields. Well, that’s bull. If you drive around now, there’s twice as much water as used to be. I think zero grade rice farming has caused that to happen. There’s a lot more water than used to be in these fields.”

There might be a lot more water, but there’s a lot less food. Modern harvesters leave very little grain in the fields. If farmers don’t leave rice especially for ducks, there’s not much for them to eat.

“If I have a 200-bushel crop and I’m losing two bushels to the acre, that’s one percent,” McNulty said. “I used to lose five percent, so there’s a lot less waste grain to begin with.”

Stripper headers, which only take the grain off a rice stalk, leave even less.

“A blackbird will starve to death trying to make a living behind one,” said Bob Rogers of Maumelle, who farms rice in Prairie County.

Also, because of zero-grade field leveling, harvesters no longer drive over rice levees.

“Every time you crossed a levee with a combine, you lost grain every time because of the way the combine tilts, in addition to what the combine didn’t get,” McNulty said.

More important is when rice is harvested. Farmers once harvested their rice in late September to early October. That roughly coincided with the first part of the migration, so there was plenty of waste grain in the fields when ducks arrived.

“Now we get the vast majority of our rice out in August,” McNulty said. “What’s left is going to sprout in early September.”

Geese arrive in Arkansas about 45 days before ducks arrive, McNulty said, which reduces the food supply even more.

“If you get a big flock of geese in, they wipe the field out,” McNulty said.

Coincidentally, 90 percent of snow, blue, white-fronted and Ross’s geese used to winter on the Texas coast, where rice was the major crop. Most rice farming in Texas ended about 30 years ago, and that’s about when geese began migrating to Arkansas.

Finally, rice farmers manage their land after the harvest differently than they did two and three decades ago. McNulty said that in a zero-grade environment, farmers must keep their fields in production continuously.

“We try to get the stubble burned and leave it where we don’t disturb the soil at all. We don’t want to till the ground,” McNulty said. “It’s not that good for the ground, and it costs us a lot money to run tractors and equipment. If we can make one trip to roll the stubble down and burn it, we don’t have to do any field prep work at all.”

That’s not good for ducks, either, McNulty said. In the past, farmers tilled their stubble into the soil where it rotted and fortified the food chain.

“All that stuff we used to do supported the invertebrates and micro-organisms,” McNulty said. “The bottom line is that farming practices are totally different than they were 25 years ago, and zero-grade rice farming is the reason why.

“I’ve been doing zero-grade for 15 years if not longer, and that’s enough time where you could see a shift. When we had levees, we had draws in the fields where a lot of weeds grew. Ducks always got in little pockets in fields that were kind of nasty areas. With zero-grade you don’t have that. Weed control is better. It’s much more efficient.”

Another factor is the increasing popularity of duck hunting throughout the Mississippi Flyway. Ducks are hunted continuously and intensively starting in Canada in late summer. Many Arkansas duck guides start in Canada, where business is very prosperous and increasing. They kill mostly young of the year mallards over spinning wing decoys. Those are ducks that never even begin their first migration. Add to that the number of young-of-the-year ducks that are killed after they leave Canada but before they reach Arkansas.

Compounding the losses over 20 years might have changed duck migration dynamics to the point where we now have several generations of ducks that are no longer hard-wired to come to Arkansas.

“From Canada to here, there’s nowhere a duck goes where somebody isn’t shooting at them now,” McNulty said. “How many are guiding in Illinois and Missouri now? And you know how commercialized duck hunting is in Arkansas.”

As Birch noted in “The Grand Prairie,” ducks that do migrate to Arkansas gravitate to areas where they are least pressured. Those are largely private clubs around Humnoke, Humphrey, Stuttgart and DeWitt. Those clubs have small memberships. Hunting parties are small, and they hunt only in the mornings. Their woods are refuges for the rest of the day in addition to the dedicated rest areas that exist elsewhere on the clubs. Also, many of them plant rice especially for ducks, and they manage their woods properly, flooding them after trees go dormant and draining them before they leave dormancy. They consistently have ducks when nobody else does, and they have an increasingly larger share of diminishing numbers.

Another alarming trend appears in AGFC waterfowl reports. Species other than mallards are becoming less common in Arkansas. McNulty notices it, too.

“I have killed 37 teal this year,” McNulty said. “It was 396 teal up to this point last year. We haven’t killed a pintail, and very few spoonbills. Gadwalls are down considerably. I had gadwalls, pintails, teal and spoonbills, and now I don’t. I still have the same number of mallards, maybe more. I have developed more woody habitat. I don’t have traditional green timber habitat, but I have small patches of woods and sloughs that I have developed for ducks. We could hunt a certain patch and come out with five limits of ducks. Now I hunt it and come out with one limit.”