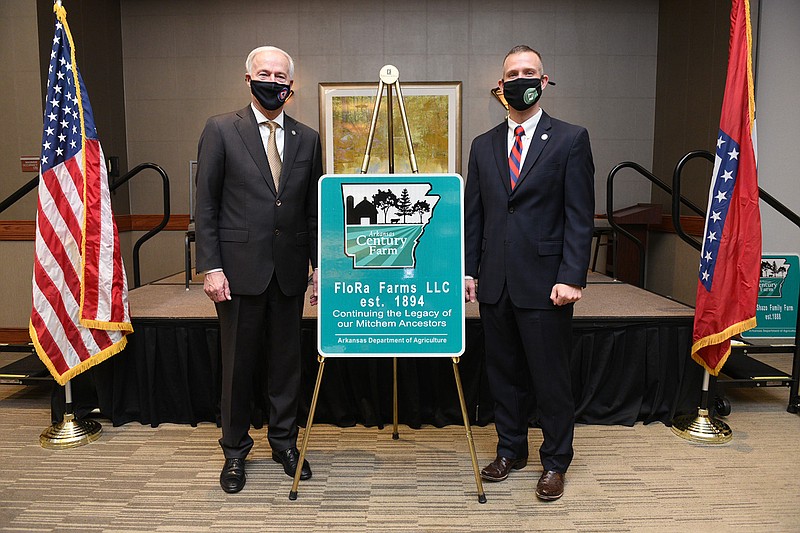 FloRa Farms LLC of Conway County was named a 2020 Arkansas Century Farm. Family members were not able to accept the award, which was accepted Dec. 11 on behalf of the family by Gov. Asa Hutchinson, left, and Arkansas Secretary of Agriculture Wes Ward.

Gov. Asa Hutchinson joined Arkansas Secretary of Agriculture Wes Ward and the Arkansas Department of Agriculture in inducting 30 Arkansas farms into the Arkansas Century Farm Program on Dec. 11 at the Embassy Suites by Hilton in Little Rock. No one from the FloRa Farms LLC was able to attend the ceremony.

Glenda Wilson of Fairfax, Virginia, a granddaughter of Rawleigh and Florence Mitchem, said 117 acres of her ancestors’ land qualified for the recent award.

“The land just has timber on it now,” Wilson said. “We just formed the LLC and are not sure what we are going to do with the land. Joshua Childress of Irvine, California, and Keitha Wilson of Fairfax, Virginia, are the managing members of the LLC.”

Thomas Walker Mitchem came to Conway County and purchased land from the railroad, establishing the Mitchem homeplace in 1894. According to his death certificate, he was born in South Carolina and died in Conway County in 1914 at age 59.

Thomas married Dora Yarbough in 1891 in Conway County. She was born in 1868 in Tennessee and died in 1918. Dora is buried in the Bold Pilgrim Cemetery in Conway County, where many members of the Mitchem family are also buried.

Rawleigh Mitchem was one of seven children born to Thomas and Dora Mitchem, and he began farming the land in 1928. He and Florence were married in 1926 and raised seven children on the Conway County farm. Their oldest daughter, Edna Mitchem Wilson, is the mother of Glenda Wilson; Edna died Aug. 21, 2020.

“Their farm was a working farm,” Glenda said of her grandparents’ farm. “They raised a little bit of everything. They had chickens and pigs … and cucumbers. They raised the cucumbers for the Atkins Pickle Co. that was in Atkins for many years.”

Rawleigh Mitchem died in 1983 and Florence Mitchem in 1982. Both are buried in the Bold Pilgrim Cemetery in Conway County.

Ward said agriculture is Arkansas’ largest industry, contributing more than $21 billion to the state’s economy annually and providing more than 269,000 jobs. He said Arkansas consistently ranks in the top 25 nationally in the production of more than 15 agricultural commodities.

“Year after year, decade after decade and in the face of many challenges, Century Farm families go out and put everything on the line to earn a living and produce our food, our fabrics, our timber,” Hutchinson said. “Farm families are great for our economy, and they also are part of the fabric of our state. They imbue our state with the same common sense and solid values that are the bedrock of their family farm. For the good of Arkansas, I hope their children and grandchildren choose to continue the family farm and that someday, Arkansas will create a Two-Century Farm Family program.”

For more information on the Arkansas Century Farm program, visit agriculture.arkansas.gov or call (501) 225-1598.