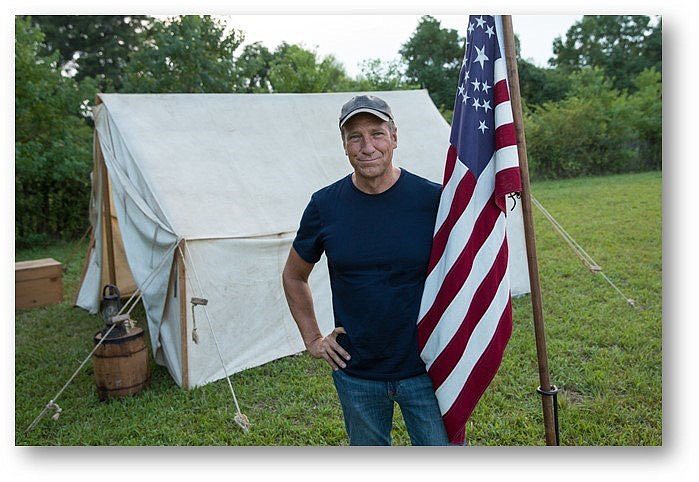 Mike Rowe will always be known as that dude who elevated blue-collar work on his hit Discovery show, "Dirty Jobs," from 2005 to 2012. He inspected sewers, inseminated cows, chipped concrete and tested a shark suit.

The six episodes of "Six Degrees" each tie two seemingly unrelated events through the lens of four other events.

Examples: Can a mousetrap cure a hangover? How does the diet of Yankee soldiers during the Civil War make his show possible? How does a volcano redeem Eminem, the rap star? It's a warped way of approaching the old "Six Degrees of Kevin Bacon" game.

Jokingly, the concepts seem to have been derived from the fevered mind of guys who did way too many drugs. In a recent interview, Rowe went along with that idea.

"The idea is that they didn't smoke so much weed as to make it incoherent but enough so it doesn't feel like a lecture," he said. "In all seriousness, it's to take the pretense out of history shows. I couldn't go as far as 'Drunk History' (a hit show on Comedy Central that ran six seasons). But I wanted a house on the same street."

For Rowe, "the weirder the question, the better."

The show, which had a limited budget and sometimes made reference to said limited budget, uses puppets, animation, archival footage and the same actor playing 35 different historical figures.

Rowe, in modern-day T-shirt and jeans, provides his sometimes snarky narration during these re-enactment scenes.

He said his show was inspired by a 1978 British show hosted by James Burke called "Connections," which focused on how different discoveries, scientific achievements and world events were successively interconnected leading to various modern tech gadgets.

"Burke was the professor you wish you had in college," Rowe said. "He was at Oxford and walked around in a white leisure suit."

Rowe wanted to do "Six Degrees" but didn't have a network or streaming service attached to it, so he sought sponsors.

He found two: the American Petroleum Institute and Distribution Contractors Association, which is part of the natural gas industry. He is transparent about his financial support.

"Energy is always in the room," he said. "I had these partners who had my back." He shot six half-hour shows during the summer of 2019 in Macon. But he wasn't entirely satisfied with the results.

He took what little money he had left and planned in March to go back and shoot some more material. But then the pandemic hit, so he was unable to shoot again until the summer.

Once he had the six episodes finished to his liking, he pitched "Six Degrees" to different services.

Discovery, who loved him on "Dirty Jobs," ultimately said yes. But instead of placing him on the regular cable channel, "Six Degrees" became one of several new shows that accompanied the launch of Discovery+ streaming service earlier this month.

As a result, Rowe has no clue how many eyeballs have seen the show so far. He believes Discovery will eventually air the show on its cable network. And as a marketing tool, Discovery posted the first episode in its entirety on YouTube.

Regardless, Rowe is optimistic the show will find an audience. "The stars lined up," he said. "This made sense for everybody. I'm just kind of relieved not to be crawling through sewers."

"Dirty Jobs" led to Rowe creating a foundation that has helped train thousands of people in the trades over the years.

And a reboot of "Dirty Jobs" is in the works. "It will give me permission to talk more about the foundation and combine the two together," he said. "It could be [informative] for a lot of people."

And even if he doesn't get more seasons of "Six Degrees," he said the show is a tribute to his dad, John, who taught history to junior high kids for 30 years, much like "Dirty Jobs" honored his grandfather Carl, a skilled tradesman.

"My goal with 'Six Degrees' is to make a good history show," Rowe said. "It's not to change your IQ or necessarily make you wiser but to make you care."