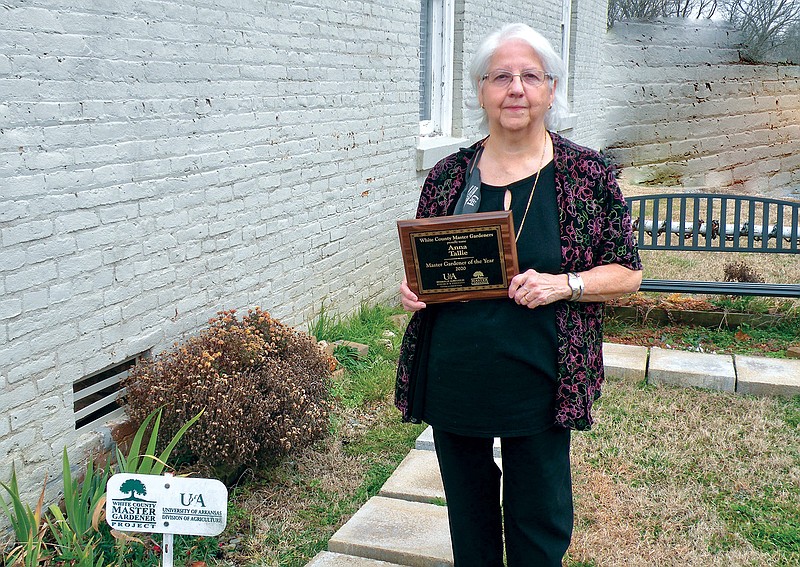 Anna Tallie is the 2020 White County Master Gardener of the Year. Among the projects at the El Paso Community Library has been the installation of a bench, shown behind Tallie.

Anna Tallie is looking forward to warmer weather when she can get outside and dig in the dirt. She’s anxious to plant new bulbs and shrubs at the El Paso Community Library, which is her main project as a member of the White County Master Gardeners.

Tallie, 67, was recently honored as the 2020 White County Master Gardener of the Year.

“I was very surprised when I learned I had been named Master Gardener of the Year,” Tallie said. “I said, ‘You’ve got to be kidding. … Are you sure?’”

Tallie, who lives about halfway between El Paso and Beebe, logged 65.25 hours of volunteer work for the Master Gardeners in 2020.

“Anna is the driving force behind the sanctioned Master Gardener project at the El Paso Library,” Sanders said. “She is also extremely active at the Daniel Park project in Beebe.

“Anna is dedicated to our program countywide, as she gives of her time at the county fair, the annual plant sale and a host of other activities,” Sanders said. “She is a friend to many, and we are extremely grateful that she is one of our most valuable assets.”

Tallie said she has been volunteering as a White County Master Gardener at the local library since it opened in 2016. The library is part of the White County Regional Library System, with headquarters in Searcy.

“I came up with a landscaping plan and decided what to plant here,” Tallie said, adding that Janet Blansett, librarian and branch manager for the El Paso Community Library, helped with the planning. “Two other Master Gardeners now work with me — Jan Hill and Sandra Johnson. And Janet helps me, too. Janet was a Friend of Master Gardeners last year.”

Tallie grew up in New Madrid, Missouri, and graduated from New Madrid High School in 1971.

“We never thought much about it,” she said, smiling, when asked about living on the New Madrid Fault Line. “We had tremors all the time.”

She married her husband, Jake, in 1971, and they moved to Arkansas in 1988 with his job with the Union Pacific Railroad. She worked at several places over the years but retired from what was then the Maybelline makeup plant in North Little Rock (now L’Oreal USA Products Inc.) after 10 years.

“I started gardening with my mother,” Tallie said. “And my dad was a farmer. So I guess I’ve always been involved with gardening … working with the land. I always had a garden and flowers when I was first married. We grew our own vegetables, and I canned.

“I had heard about the Master Gardener program and thought I might enjoy it, so I signed up for the courses,” she said. “And here I am. I thought I knew how to garden, but I have learned so much … and I am still learning.

“Over the years, we have added plants, flowers, shrubs and roses at the library,” she said. “A few years ago, we added a bench on one side of the building.

“I hope to plant a small butterfly garden this year, although I haven’t really talked to Janet about it yet,” Tallie said. “We will put it out back … plants that attract not only butterflies but also bees. You’ve gotta have the bees.”

Blansett said Tallie is “so dedicated.”

“She comes by all through the week,” Blansett said. “I may drop by on a Saturday, and there she is … hard at work.

“She knows the community, too. She lived in El Paso for a while. She is a member of the book club that meets here once a month. She also knits and crochets and is a member of a group that also meets here.”

Tallie said that among the newest flowers she has planted at the library is a Fairy Rose Bush, which will have red blossoms.

“We have planted hundreds of bulbs, such as daffodils and surprise lilies, as well as iris, dianthus and mums,” she said. “Anything colorful … vinca, marigolds. The biggest problem we have is keeping the cats out of the beds.

“I read somewhere that putting plastic forks in the beds with the prongs pointing upward would keep the cats out,” she said.

“I may try that so I can say, ‘I’m such a good Master Gardener that I can grow plastic forks,’” she said, laughing.