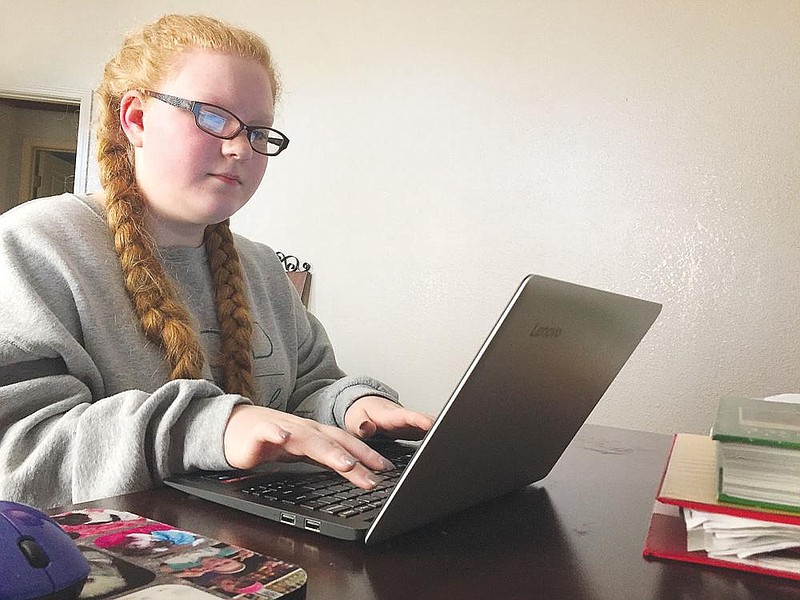 Madalyn Bryson, 14, a ninth grader at Marmaduke High School, composes an email to her physical education teacher from her bedroom in this December 2020 file photo. Madalyn switched to virtual learning after Thanksgiving as virus cases increased at the school. (NWA Democrat-Gazette/Dave Perozek)

The state has approved plans from more than 100 school districts across Arkansas to continue offering virtual education in the coming school year, a show of how the pandemic has changed education.

Some districts are getting their online instruction from outside vendors and organizations such as Virtual Arkansas, Florida Virtual Academy and the Arkansas Public School Resource Center.

Other of the applicant districts are relying on their local education service cooperatives to provide or facilitate an online instruction program for students in the member districts. (The coops are entities that help member districts provide services they might struggle to manage alone.)

Some districts are creating their own virtual education programs and curriculum. Districts are also using a combination of all these methods.

How are the plans approved?

To offer virtual instruction, the districts must seek waivers from the state. The waivers allow the districts to forgo for virtual students many of the rules in place for traditional education, such as attendance requirements and the cap on class size at 30 students.

To receive a waiver, the districts send applications to the state’s Division of Elementary and Secondary Education who review them, give feedback to the districts and eventually provide a recommendation to the state Board of Education on whether or not to approve the plan.

The board then evaluates the application and makes a final decision. The waivers can be granted for up to five years, but some districts are seeking them for less than that.

About 50 plans have not yet been decided on by the state.

What school district plans have been approved so far?

The first plan, for Siloam Springs, was approved in May. Another 20 plans, including from the Jacksonville/North Pulaski School District as well as the districts in Bentonville, Rogers, Fort Smith and West Memphis, were approved later that month.

(Pulaski County Special School District, the final district in the county, sought approval to continue offering virtual education through its conversion charter school, Driven. That plan was considered and approved back in December through a different process).