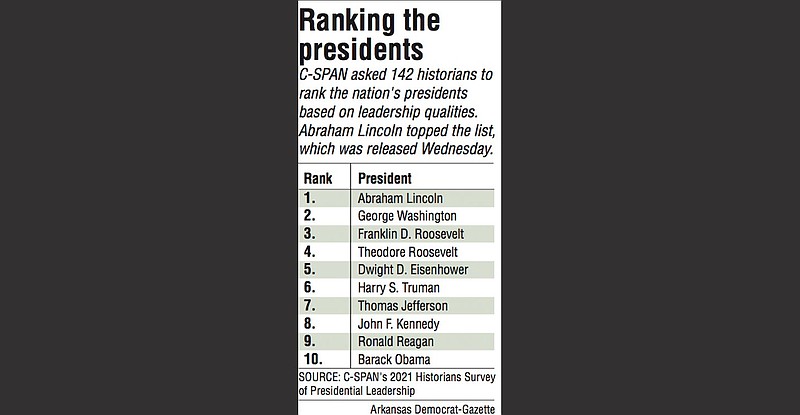 WASHINGTON -- Given the chance to rank the presidents, a group of historians placed Barack Obama near the top of their list and Donald Trump near the bottom, with Bill Clinton receiving somewhat better-than-average marks.

Trump, who told a 2020 campaign crowd that he could be "more presidential than any president" besides Lincoln, was ranked 41st out of 44, surpassing Franklin Pierce (42nd), Andrew Johnson (43rd) and James Buchanan (44th).

Trump fared better in two categories: "public persuasion," where he ranked 32nd, and "economic management," where he finished 34th.

C-SPAN's Historians Survey of Presidential Leadership, which dates to 2000, is conducted after every change of administration.

The latest survey was released Wednesday.

This year, 142 historians and presidential observers participated, including Robert Maranto, a political scientist and professor at the University of Arkansas' Department of Education Reform.

In a telephone interview, he portrayed Trump's one-term presidency as flawed.

"Any administration will have its scandals; I think this one was a lot more scandal-prone than any we've seen in a while," Maranto said.

"He was a guy who would tend to fire people who gave him bad news, and we all have had bosses like that, right? It's the essence of bad leadership. If he had been a good boss ... he would have had a more stable team, and he pretty likely would have been reelected. But, you know, being a reality TV show star is not good training for president," he said.

It's important for historians to acknowledge the administration's successes, Maranto said, pointing to one foreign policy triumph as an example.

Obama ranked 10th overall, buoyed by high marks for pursuing "equal justice for all (third)" and for moral authority (sixth). He ranked lowest for "relations with Congress" (32nd) and "international relations" (21st).

Clinton ranked fifth for economic management and eighth for pursuing "equal justice." His lowest marks were for relations with Congress (23rd) and moral authority (38th).

"President Clinton is considered a solidly above-average president. If you look at his policy successes, they were fairly substantial," Maranto said.

Two decades after the Clinton presidency, historians still give him low marks for moral authority.

"The Trump scandals have highlighted the importance of ethics in a president," Maranto said. "President Clinton, to some degree, nudged open doors that Trump then barreled through."

Since the first survey, views on a few presidents have shifted sharply. Woodrow Wilson, ranked sixth in 2000, has fallen to 13th. Andrew Jackson, ranked 13th two decades ago, has slipped to 22nd.

Richard Norton Smith, a noted historian and an original member of the C-SPAN survey advisory team, said historians' views are not static.

For most of the 20th century, there was a consensus "that Grant would be remembered for the scandals" in his administration, Smith said.

In the 21st century, historians look at Grant "and they see the last president for 80 years who was willing to send federal troops into the South to protect the rights of newly freed slaves," Smith said.

It's not easy to rate presidents, particularly soon after they leave office, Smith said.

"The older I get, the more convinced I am that this business of ranking presidents is full of pitfalls," he said. "I think there should be a 20-year rule that says, literally, we don't try to pass historical judgment on anyone who's been out of office less than 20 years."